Originally conceived as a joint TV and toy effort, with physical LEGO sets complementing what kids would watch on their screens, LEGO NINJAGO has evolved into a successful brand for the block-based giant. One that, over its last several years of existence, has become so big as to warrant a big screen adaptation. That is, The LEGO NINJAGO Movie, which is currently karate chopping theatres with its spinjitzu powers.

Like many before it — including Saban’s Mighty Morphin’ Power Rangers — LEGO NINJAGO is the story of several colour coded teenagers who use both their athleticism and unique special powers to save their community from doom. Unlike the Power Rangers, however, this mixed gender group of teens happens to have the elements at its advantage. These powers set them apart from their enemies, and are thus very helpful when push comes to shove, both in the movie and in its complementary video game, The LEGO NINJAGO Movie Video Game.

Developed by none other than TT Games, under its TT Fusion brand, The LEGO NINJAGO Movie Video Game features all of the trappings that we’ve come to associate with their work. There have been many LEGO games, after all, and they all tend to share the same core design principles. Thus, after so many years, the lengthy line of block-based licensed experiences has started to blend together, and become rather familiar as a whole. Too much so, to be honest.

While the beginning of what is essentially a movie tie-in suggests that it will be different, and better, than those that came before it, that doesn’t end up being true. Although the opening mission is full of visceral action, and complemented by shiny visuals that show a level of fidelity that this series has never before offered, the highs don’t remain constant throughout. After a bit, the gameplay’s pizzazz lessens, and things fall back into the typical trappings of your average LEGO game. This means basic combat (despite there being a couple of ninja powers to take advantage of, such as one that sends opponents flying upwards and allows you to get ten or twenty hits in on them at the same time), and progression systems that are built around breaking objects then building something new using their parts. It’ll all be very familiar to anyone who’s played one of the many TT Games releases over the last however many years, but it gets the job done for the most part.

This time around, you’ll also have to deal with multi-builds, which task you with using the same parts to build two different items. Doing so in the correct order will then allow you to progress past the puzzle, by unlocking a door, putting out a fire or something of that ilk. Sometimes you’ll also have to mix these builds with the characters’ unique powers, which include a devastating wind gust, the ability to freeze water (including mini waterfalls) and the power to summon large amounts of water. The best ones, though, happen to be fire and electricity, which are both more visceral and interesting to use. That said, however, none of the powers are used in very exciting ways, and are only really useful whenever a puzzle needs to be solved. You’d think that they’d factor into combat in an interesting way, but they really don’t, unless you go out of your way to shoot a fireball at an enemy or something like that. The combat is designed to be fast, and it rewards players who repeatedly press the X button, or jump and attack blocking enemies from the air, more than it does those who want to use elemental powers. 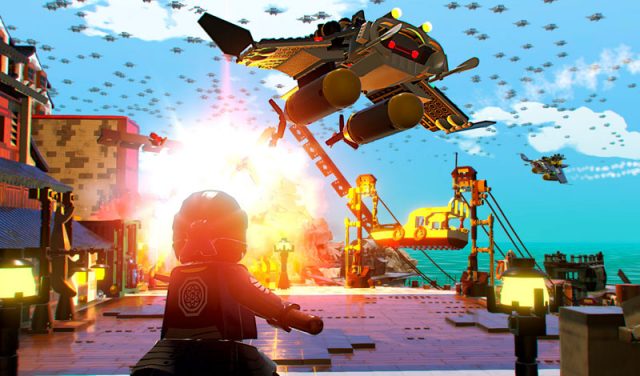 Comprised of more than ten chapters, which take place throughout NINJAGO City and its surrounding areas, The LEGO NINJAGO Movie Video Game is, perhaps, the shortest of the blocks’ adventures yet. Overall, there’s about four to five hours’ worth of gameplay, if you simply stick to the story. There are, however, lots of secondary things to do, including side quests, races and challenge dojos, the latter of which are comprised of wave-based engagements against increasingly difficult enemies. Your goal, then, is to defeat all of the foes who come your way, before meeting the dojos’ leaders and doing battle against them, thus earning yourself a shiny achievement or trophy.

Each of the game’s eight different environments becomes a semi open world hub once its story mission(s) have been completed. There, you’ll find the aforementioned races and side quests, and will also be able to do some sleuthing in an attempt to locate all of the game’s many different collectibles, such as golden bricks, magical scrolls and character kits. What’s most unique about this particular one, though, is the fact that it replaces the old “True Hero” system with a more progressive stud collecting incentive.

Whereas previous games in the series would award players for finding a certain amount of studs in each level, by knighting them “True Heroes” of that level, LEGO NINJAGO does things a bit differently. Through it, the True Hero system is not locked to individual levels and is instead presented as a cumulative total, which is increased every time you pick up a coloured stud in either free roam or story-based play. In total, there are 20 levels to reach, and each level up offers a gold brick, as well as some character creation gear.

Finding every bolt and miscellaneous collectible won’t come all that easily, as you’ll need to spend hours searching while taking advantage of each ninja’s unique powers. Some will opt to do this, but most gamers won’t have the patience or interest in doing so. That’s how every LEGO game is, though, and it doesn’t look like it’ll change anytime soon.

If you care to, you can also play some multiplayer with up to three friends, or opt to do so against bots. In this realm of local split-screen lays three different modes, which can be boiled down to things like capture the flag and ‘collect the orbs.’ This mode is very basic, feels incredibly dated and doesn’t perform all that well, or offer much in the way of fun. What’s also disappointing about it is that, even if you play alone, you’re still forced to play in split-screen, with four small boxes making up the characters’ viewpoints.

Needless to say, what holds The LEGO NINJAGO Movie Video Game back and keeps it from being anything special is an unwillingness to change. What could have been an exciting game, that used its characters’ special powers in unique and memorable ways, is, instead, just another LEGO game where you must break things and build more to solve puzzles. One that seems to value repetition over creativity, and runs very poorly for some reason. 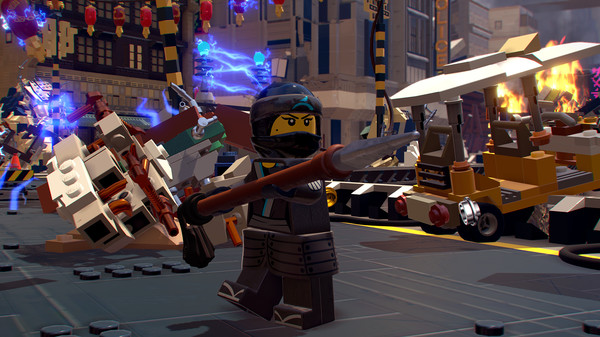 Although the first part of the campaign ran smoothly and looked quite good, it wasn’t too long before lag and slowdown really started to creep into the experience. It came and went over the course of the several hours it took to beat the game, but would always appear out of nowhere and stay around for a bit. At times, things slowed to an absolute crawl, making combat (and anything else) an absolute chore. A patch is needed to address this major issue, as well as the terribly long loading times and occasional screen tearing that also factor in to make this a frustrating experience.

The rest of the presentation is hit and miss, with the first level acting as more of a tease than anything. Although the visuals are a bit better than they have been before, that doesn’t stop the environments from becoming muddy, or prevent things from getting stale after a while. As with all LEGO games, you can expect to be dumped into levels that overstay their welcome, some of which look better and offer more variety than others.

On the other hand, while the audio is half decent overall, with okay voice acting and some comedic moments — quite a few of which come via scenes from the film, itself — it isn’t without its issues. Although it corrected itself over time, the audio was so low and muffled during the start of the campaign that I couldn’t hear or make out much of anything.

Overall, TT’s The LEGO NINJAGO Movie Video Game is a missed opportunity that is held back by its developers’ unwillingness to change. What could have been a much more exciting movie tie-in is, instead, a repetitive, dated and uninspired experience that won’t come close to winning any awards. If you’re a fan of the LEGO games, you’ll find things to like and enjoy here, but if you go in expecting something unique, different or exciting, then you’ll be disappointed. This is, at the end of the day, a very mediocre outing, which tells a rather middling story through block-based action.

**This review is based on the Xbox One version of the game. We were provided with a review code.**