One of the most beloved action-RPG’s of the 16-bit era is definitely Secret of Mana. The game is so beloved in fact that it’s even included as one of the thirty games present on Nintendo’s recent Super NES Classic Edition microconsole, assuming that you were lucky enough to successfully track one down! If you still have yet to experience this classic adventure however, or are perhaps looking for an all-new way to experience it on modern hardware, then rejoice! Secret of Mana is being re-built from the ground up for modern platforms, and I recently got to enjoy an early play test of the remake’s PS4 build, ahead of its early 2018 release! This isn’t to be confused with the remaster of Secret of Mana for smartphones, nor the Japanese Seiken Densetsu Collection’s offering for Nintendo Switch, as those pretty much completely preserve the style and gameplay from the Super NES original, while this 2018 remake of Secret of Mana instead aims to modernize everything, to the point where how it looks and plays is noticeably different from the original.

(EDITOR’S NOTE: While playing this demo for the Secret of Mana remake, I did make sure to ask Square Enix’s PR folks if there were any plans to localize Seiken Densetsu Collection for the West, though sadly, they didn’t seem to be aware of any plans to do so. There are also, disappointingly, no current plans to bring either this Secret of Mana remake, nor the previous Adventures of Mana remake, to Nintendo Switch. Square Enix hasn’t completely dismissed the possibility of bringing at least the Secret of Mana remake to Nintendo Switch in the future however, considering the platform’s massive runaway success, but for now, Secret of Mana’s remake is only releasing for its previously announced platforms. Finally, there are still no current plans to release Seiken Densetsu 3 in the West in any form, but Square Enix has heard the fans and is aware of the interest.) 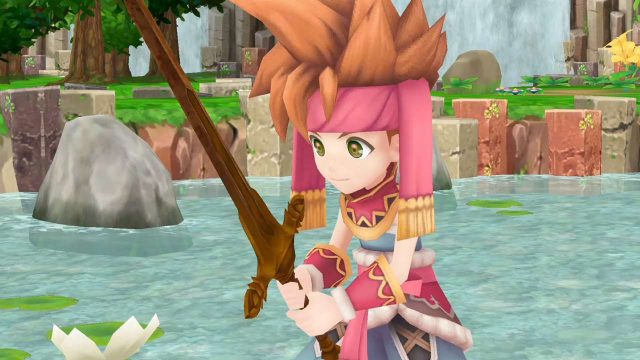 For those unaware, Secret of Mana places you in control of Randi (whom you can rename if you want, just like in the Super NES original), a young man from the tiny village of Potos. After playing with his presumed friends, Randi accidentally slips off of a log and falls down a waterfall, fortunately sustaining no injuries, due to the laws of JRPG protagonists. When Randi comes to, he finds a mysterious voice calling him to a shining, brilliant sword in the water, which Randi is able to pull out and brandish like a true hero!… Well, okay, in reality, the sword has become a rusty old hunk of junk, but every hero has to start somewhere!

The game’s art style nicely modernizes the adventure in a whole three dimensions, which won’t necessarily be to the taste of every purist. The Secret of Mana remake’s visuals are certainly solid in any case, though their quaint character models and simple retro chic environments also wouldn’t look out of place on a smartphone, which probably explains how a PS Vita port of this remake can exist. That said however, the demo did feature untouched music and sound effects from the original Super NES game, which feels effectively nostalgic for fans who already adore the original game, even if the crude 16-bit instrumentation is also a little out-of-place in a modern PS4 game. The original game announcement claims that an arranged musical score will be featured in the Secret of Mana remake, so it’s possible that the original Super NES music and sound effects could be a placeholder for the demo. I can’t say for sure at this point.

One thing that even most purists will be able to get behind though is the smoother and more responsive controls in the remake, which make the original Super NES build of Secret of Mana feel downright sluggish and rigid in comparison. Randi can now easily move in any cardinal direction using the left analog stick, without feeling like he’s stuck in some weird hybrid between a four-direction and eight-direction navigation system. Swinging Randi’s sword also feels more snappy and agile in the remake, even if the same system from the original game, where you have to wait for your attack meter to charge if you want to actually do decent damage to enemies with your strikes, is still in place in the remake. Don’t worry about the Secret of Mana remake straying too far from its combat roots, even with the modern refinements, since little touches like Randi being knocked over by a big hit, occasionally flipping away from enemy attacks, and players being able to see a cutesy grim reaper hover above Randi after his HP is depleted, are all preserved in this modern revamp, much to mine and no doubt other fans’ delight.

I was limited to playing the Secret of Mana demo solo, sadly, especially since I couldn’t play far enough to recruit Randi’s two allies, Primm and Popoi during my time with the demo, but I am told that the Secret of Mana remake will accommodate three simultaneous players in local co-op if you wish, even if this feature is probably easiest to enjoy on PS4 specifically. Sadly, online co-op won’t be available, but that’s forgivable, since Secret of Mana is best enjoyed on a couch with your friends anyway, assuming you don’t just want to play it solo, as the majority of players will probably be doing when the remake releases to the public. Even in the original Super NES game, Primm and Popoi could hold their own pretty easily, and had surprisingly reliable A.I. for the time, so I imagine that they still won’t need to be babysat in the remake, especially with players now having more precision and agility to navigation and combat in this modern incarnation of Secret of Mana.

After seeing through the scene of Randi being lured to the rusted Mana Sword and picking it up, I ran down the nearby forest path, taking out weak Rabite monsters along the way, and using the fully retro chic minimap in the corner of the screen to help navigate. Fortunately, Rabites are barely capable of doing any real harm to Randi, so this stretch provides a useful opportunity to get used to the game’s combat mechanics, if you’re not already familiar with them from the original Super NES game. It didn’t take too long to navigate my way back to Potos Village either, even if I was simply greeted by the superstitious villagers giving me a cold, hostile reception, even those supposed friends who were supposed to be adventuring with me! Sadly, this is inevitable and unavoidable, as the same scene plays out in the Super NES original, though fortunately, a noble knight named Gemma is at least in Randi’s corner. That’s a good thing too, since this scene ends with Randi falling into a sinkhole and landing in a cave, where he has to defend one of his rude frenemies from the game’s first boss, the Mantis Ant!

The Mantis Ant battle is easily the best showcase of just how much of a difference the refined combat offers in the Secret of Mana remake. With quicker and easier movement and striking, this formerly aged first boss became a whole lot more enjoyable to do battle with, thanks to some smart modern polish that still doesn’t manage to override the classic game’s sensibilities in their entirety. Of course, to compensate, the Mantis Ant has been made noticeably tougher to defeat in the remake, with the boss also being faster, smarter, and much less stingy with its deadly arm blades! In order to destroy the monster, you have to keep surrounding it and striking its vulnerable backside whenever your combat meter is full, since a head-on assault will simply result in Randi getting sliced and diced pretty quickly. Sadly, just like the original game, the kid that fell into the cave with you is completely useless, but that’s alright, since my smart sword strikes and careful maneuvering eventually resulted in the Mantis Ant’s destruction, which is still realized by a glowing, overblown vaporization effect in the remake, as with the original. 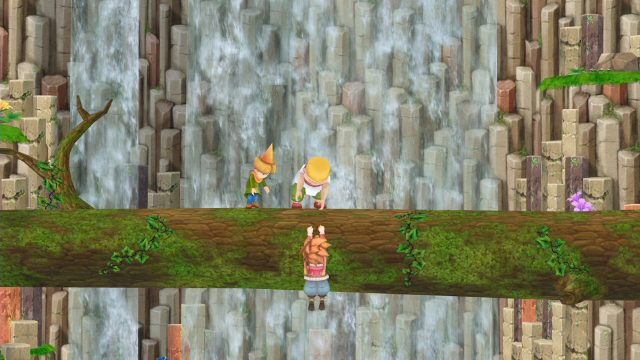 So what’s my thanks for this act of bravery and valor? Expulsion from the village, of course! Yeah, Potos’ citizens are just as unhelpful and nasty as they were on Super NES, once again leaving Randi with no choice but to take a few treasure chest goodies and go. The ridiculous animation from the original game wherein characters repeatedly slam chests on the ground to force them open and reap items is thankfully also preserved in the remake, but disappointingly, I wasn’t able to venture much further from here. My time with the demo ended shortly after making use of the nearby cannon travel service, yet another lovably ridiculous element from the original game that’s thankfully preserved in the remake (though the removal of the spinning Mode-7 flying animation in the remake is a bummer), but seeing that I’m already well familiar with Secret of Mana’s dorky, yet epic adventure, I’d already seen enough regarding what the Secret of Mana remake aims to do in terms of updating the beloved original.

Secret of Mana’s 2018 remake definitely feels refined, and definitely handles a lot better than its Super NES inspiration with modern PS4 controls, even if the proudly retro audio and modernized three-dimensional presentation don’t totally feel like they go together. I should indicate as well that my Secret of Mana demo was running on a PS4 Pro, but as far as I can see, there isn’t any noticeable benefit to playing on Sony’s upgraded console, so base/slim PS4 owners probably aren’t sacrificing anything with the less powerful hardware. Lastly, regarding the technical elements, I did encounter a few amusing bugs in the demo, such as an endlessly looping in-game ring menu (yes, the ring menu is back in the remake, being easily called up with the Square Button), and a strangely fussy title screen cursor, but Square Enix has assured that those bugs will not be present in the final game. I believe them, since they’re very goofy and blatant glitches.

Overall, as a fan of the original Secret of Mana, I feel that this early play test of the remake hits many of the right notes for me. If nothing else, the gameplay provides a strong balance between classic and modern sensibilities, and while the presentation won’t be to every longtime Secret of Mana fan’s liking, I did appreciate the clear effort that’s been put into it, especially with full English voice acting for every dialogue scene, which I was able to listen to throughout the demo, and was generally very pleased with. Some of the character models are very rudimentary-looking, but Randi himself looks pretty good by contrast, while maintaining the quaint, light-hearted style that he had in the original game. Hearing Randi speak and animate in a full three dimensions definitely helps to give him more of a sense of clearly defined personality as well, compared to the static text and sometimes awkward localization of the original game, and I imagine the same will be true of Primm and Popoi when they ally with him.

Whether you want to experience Secret of Mana for the fiftieth time or the very first time, this remake looks to be one of the most accessible and polished ways to do it. As long as my ring menu doesn’t loop forever in the final product, I think this is shaping up to be a fun and smartly-produced new take on a well-respected RPG classic.