When Super Mario 64 launched alongside Nintendo 64 in 1996, the game was a huge leap forward for Mario and company. The game was received with critical acclaim and market success, catapulting Nintendo into the three-dimensional space and ushering in a new era for Mario. Since then, we’ve been treated to Super Mario Sunshine and Super Mario Galaxy, both in that decidedly 3D space, while the most recent mainline Mario game, Super Mario 3D World, was unlike the full console Mario games we’ve come to expect.

Super Mario Odyssey brings us back to a beautiful open, sprawling world with a ton of unique level design that Super Mario 64 originally showed us, and it’s marvelous.

Nintendo Switch is a particularly powerful handheld console and Super Mario Odyssey is a great way to showcase its power. It isn’t quite as realistically beautiful as The Legend of Zelda: Breath of the Wild, but it wasn’t designed to be; this is a more stylized design, and the console handles the game without any dips in framerate or performance. Playing in handheld mode is best visually as the display is very crisp, but playing docked on the TV also yields the same results in higher resolution, albeit with a display that is much farther from your face. 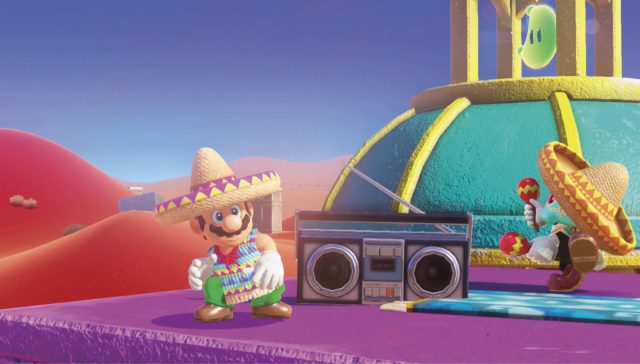 Super Mario Odyssey will take you on a journey across many kingdoms–upwards of eight, we’ll say, just to leave spoilers out of this review (hint: it’s way more than eight)–each with a unique visual and gameplay style. Some are more traditional Mario platforming experiences, such as the Luncheon Kingdom in which Mario is surrounded by a bunch of moving platforms and fiery pits of molten hot, well, stew in this case. Other areas such as the Cascade Kingdom are a bit more realistic looking with forests and large boulders alongside a giant Tyrannosaurus Rex. It’s a nice juxtaposition from Mario’s cartoony aesthetic.

Of course, New Donk City is perhaps the most unique kingdom in the game, opting for a very realistic New York City vibe that evokes some Grand Theft Auto vibes (in design and layout, not in gameplay, of course).

Super Mario Odyssey carries with it some of the most recognizable music from video game history. It does so with dozens of tracks as well as 8-bit remixes when playing in a retro-themed area (but more on that later).

The theme around Odyssey‘s marketing efforts has been a Broadway-style musical that actually serves as a major story point. It is instantly recognizable throughout New Donk City and comes up throughout the main story. Other sounds are pleasant and wonderful throwbacks to virtually every Mario game ever made; there are so many unique one-off sounds that have been used in Odyssey as fan service for older gamers that this was clearly a labour of love for the audio artists and developers alike.

The retro throwbacks don’t stop with the audio, either. Obscure references such as radishes from Super Mario Bros 2 or more obvious ones such as a race down an icy slope from Super Mario 64, have all been incorporated into Odyssey.

Mario has always been a character with a ton of moves, unique gameplay, and a whimsy all his own. Odyssey does absolutely nothing to slow this down, adding new moves and gameplay mechanics to further push the series.

The biggest change is your new friend, Cappy. Aptly named, as he is literally the cap on Mario’s head, the overall-laden plumber throws Cappy at enemies to stun them, or more importantly, capture them and do with them what he will. For example, as a flying koopa is coming towards Mario, one fling of Cappy will stun him, knocking his own cap off (yep, enemies get caps, too), and another will have Mario take over controlling him, giving the plumber the ability to jump higher, fly around, and potentially throw hammers or fireballs, depending on the capabilities of that specific koopa.

From there, Mario has access to new areas as a result of his abilities. You can capture everything from Lava Bubble enemies to Bullet Bills, gaining attacks Mario has always had to thwart rather than deliver. It’s a wonderful bit of power Mario hasn’t had before.You can also capture some inanimate objects in an effort to complete challenges and earn more Power Moons (a departure from the usual Star-collection mechanic in previous titles). Mario can take over anything from boulders to manhole covers to zippers, all in an effort to reveal hidden stages and levels, or potentially unearth more Moons.

You can also capture some inanimate objects in an effort to complete challenges and earn more Power Moons (a departure from the usual Star-collection mechanic in previous titles). Mario can take over anything from boulders to manhole covers to zippers, all in an effort to reveal hidden stages and levels, or potentially unearth more Moons.

Bosses have also long been a staple in Mario franchise, and it’s safe to say that the enemies in Odyssey are actually more akin to Zelda bosses than previous Mario ones. With the new capture mechanic, bosses need to be captured in some way in order to be defeated, eschewing the typical “jump on the boss’ head three times to defeat it that has been popular for the past few decades. One boss requires Mario to take over his giant fist and fly it back towards his face. Another has you taking control of a smaller enemy that grows about ten times in height in order to hit the enemy’s weak spot beneath it as it floats above you. You even take over a chain chomp and charge up towards the boss to take her out (okay, you do these all three times, but at least it’s not always the same thing).

These mechanics make the game feel much more strategic in nature, and every boss arena has a very obvious Zelda-like feel to it. With the enemies and assets changed, this could have very easily been a Zelda game geared more toward a casual audience, and Nintendo would do very well to adopt this platform and design for a future title in the series.

That reference we made to Grand Theft Auto may actually be more accurate than it seems, as the game has a veritable ton of side quests to accomplish, with over 900 Power Moons to collect in all. You only need about 200 or so to complete the main storyline, and perhaps another 300 to reach the actual final challenge (though this isn’t a necessity, but rather a task for the most hardcore of hardcore gamers to attempt), leaving a solid 400 Power Moons in the world to collect as side-quests after the main story. Nintendo does an excellent job of scattering these throughout the worlds, often easy to find, and sometimes painstakingly difficult, but always satisfying to collect, even when it happens over and over (and over) again.

It’s a Mario game. Bowser captures Princess Peach and you need to rescue her. Points go to Nintendo for making it a bit more unique in that Bowser tries to marry Peach against her will (creepy, dude), but otherwise, it’s an uninventive excuse for another Mario game.

Super Mario Odyssey is a return to form for Nintendo’s biggest character. The game brings new enemies and worlds to life in ways that only a Mario game could. It treads into new territory with Cappy and stays glued to some series tropes so tight that it is hard to image the big-N ever letting go.

The Kyoto-based company has now released two Game of the Year contenders as well as a brand new console in the same year. Super Mario Odyssey reaffirms that Nintendo is back in action in a big way.