If there’s one thing that Marvel’s Guardians of the Galaxy happen to be, it’s dysfunctional. Although they’re glued together by shared goals and circumstances, each one of the several members has a mind of his (or her) own. This often results in spats and arguments, which sometimes delve into feeling hurting territory and cause the warring parties to avoid each other for at least a limited time.

This has all become a trend in Marvel’s Guardians of the Galaxy: The Telltale Series, which has highlighted the personality conflicts that so heavily weigh upon this ragtag group of superheroes. Though they work well as a team when it matters, downtime often leads to a war of words between each of the several “my way or the highway” personalities.

Now, with the fifth and final episode of the choose-your-own-adventure series, Telltale has chosen to focus on two things: feelings and conflict resolution. This goes for not only the team, itself, but also their continuing battle against Hala, who wishes them dead following the unexpected death of her resurrected son. Coming out on top of that world threatening skirmish may be goal number one, but getting there will require some finesse in the form of addressing feelings through purposefully chosen dialogue.

Overall, Don’t Stop Believin’ is a decent and somewhat weighty finale, even if it is just an hour in length. It is, however, definitely not perfect. Pacing issues, especially early on, threaten its quality and entertainment value, as does a very slow chapter that focuses on building memory bridges with Mantis’ help. By that, I mean that players will find themselves in a strange and barren world, where they must walk up to different coloured memory orbs, select them and then listen to the memories they contain in order to reestablish personal connections by way of creating memory bridges.

While the memory sequence does serve a purpose, it’s far from exciting and slows things down much more than it should. The rest of the episode then attempts to make up for that, with an action-packed climax and both a comedic and heartwarming conclusion. That segment’s damage is never fully healed, though, and it hurts the episode quite a bit, while also highlighting the importance of pacing. 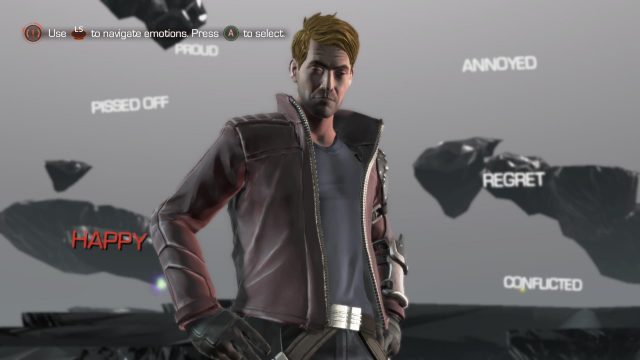 Repairing bridges and coming to grips with one’s feelings is a trend here, though, and it carries throughout this finale as it did with the rest of this solid but unspectacular series. Players’ choices have led them to where they are, and their relationships with the other Guardians will evidence that, even if said decisions don’t end up mattering as much as one would hope. By getting to know the team, though, one is prepared for making a near final decision as to who will do what during the assault on Hala’s ship and its planet destroying weapon. One must hack the computer, another must guard said hacker, and yet another must create a distraction. The remaining member will then have another ‘important’ duty, while Peter must use his limited flight ability to blow shit up.

While this isn’t the most exciting climax known to man, it does the job and serves its purpose, and offers some entertainment in the process. There’s also some humour to be found in it, as I discovered by choosing to have Groot create a distraction. There’s always lots to laugh at with the Guardians, though, and this series has done a pretty good job of showcasing that, even if I personally wish it would have been funnier. As someone who likes super heroes, but happens to be sick of the constant barrage of movies we’ve received in recent years, I prefer heroes (and films) that are outside of the box. That’s why Guardians of the Galaxy is easily one of my favourite Marvel movies, along with its almost as good sequel. 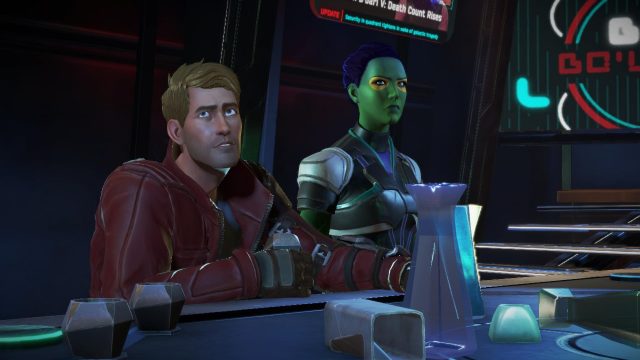 When Don’t Stop Believin’ focuses on its main characters, it succeeds, outside of its time spent in slow motion during the aforementioned feelings scene. It’s the characters who drive this bus, after all, not Hala. Still, the conclusion of Hala’s story ends up being fitting and pretty entertaining, even if it’s not as awesome as it could’ve been. Then again, I tend to feel that way about this series as a whole, because while it had a lot of potential and has had some really good moments, it never ended up being as great as I’d hoped it would be given both the source material and its developer’s pedigree.

Alas, this is a fitting albeit unspectacular conclusion to a decent Telltale series. One that will likely please fans, but will surely leave them wanting more. Here’s hoping that, if there is a second season to Marvel’s Guardians of the Galaxy: The Telltale Series, it’ll take a step forward and address this one’s shortcomings.