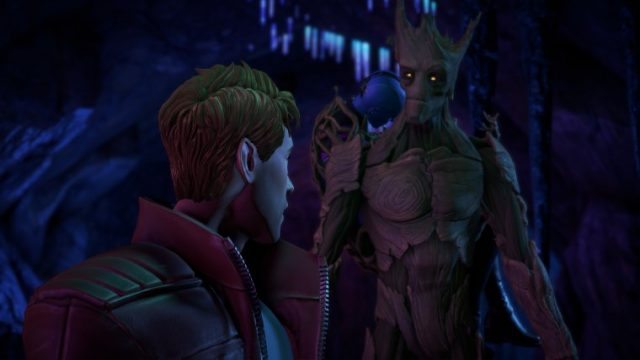 When we last met up with Marvel’s colourful Guardians of the Galaxy, they were in a tough spot. After finding and activating the Infinity Forge’s tomb, their party was spoiled by Hala the Accuser, who was hellbent on taking the powerful artifact and using it for her owns means. And that’s what happened, as Hala seized control of her desired relic and then used it to resurrect her lost and seemingly forever gone son.

This creepy and unnatural reunion didn’t last long, however, as the Guardians quickly acted and destroyed the Infinity Forge. Thus ended the blue skinned warrior’s dream of reuniting with her deceased son, en route to returning the Kree to what they once were.

It’s here, following the Infinity Forge’s demise, where the fourth and almost final episode of Marvel’s Guardians of the Galaxy: The Telltale Series picks up, and for good reason.

Having regained consciousness and ridden herself of the shock that came with unexpectedly losing her son for a second time, Hala comes to with rage fueling her every thought and move. As expected, she attacks and severely wounds one of the Guardians’ allies, before the group is ‘lucky’ enough to find their way out of danger by falling into a strange and unknown crevice.

A large part of this fourth episode (which goes by the name of “Who Needs You?”) then centres upon the ragtag heroes’ attempt to escape from this aforementioned crevice, which ends up being a rocky tunnel system that just so happens to be filled with some unfriendly creatures. Surprising, this is not. After all, we’re talking about a story featuring super heroes, and it’s not like they ever stay out of peril for long. 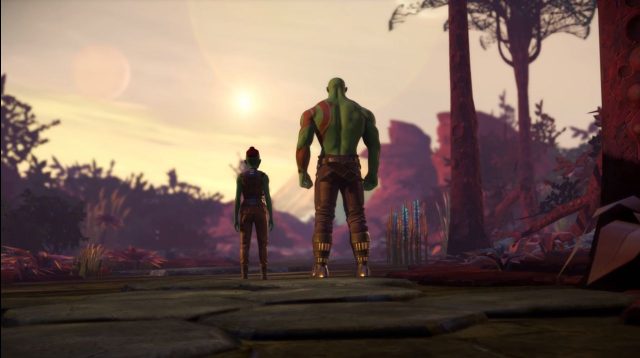 As such, most of the approximately one-and-a-half hours players will spend with this segment will be based around working as a team to escape from this rocky danger. There are light puzzles to solve, dialogue options to go through and even an interesting, albeit short flashback. What it all culminates in is a badass attempt at getting away from something big, ugly and evil, which results in a hilarious choice that is then followed by a potentially life changing one.

In-between the beginning and the end of this episode, Marvel’s Guardians of the Galaxy: The Telltale Series gives players a bit of freedom to explore. Freedom is a word I’m using loosely, though, because it boils down to using Star-lord’s rocket boots to search a corrosive environment for helpful items. It’s not new, and has been done before, but it does allow for a bit of variety even though it’s not the most enjoyable kind.

Where this episode really succeeds, however, is in its attempt to refocus. Although danger is rampant and seems to be around every corner, lots of time is spent on the Guardians, themselves. Having escaped from Hala’s clutches, they’re left to their own devices, and the infighting and hilarity that we’ve come to expect ends up ensuing. Needing to drop weight is a highlight, as is a stoned and air-headed Groot.

Overall, ‘Who Needs You?’ presents its share of memorable moments, along with some rather interesting and insightful dialogue options. The choices it offers are notable and poignant, and they help this episode both stand out and establish itself as one of its series’ best.