The first time around, fans of the heroes were treated to a grandiose tale that took place within an open world New York City. Now, with the sequel, creative freedom has resulted in something rather different, and perhaps even unexpected. That is, a world by the name of Chronopolis, which combines close to twenty of Marvel fiction’s most notable worlds into one piece of open world patchwork. The result is one of the more unique open worlds ever seen in a LEGO game, or really any game for that matter.

Things begin with the Guardians of the Galaxy swooping in to save the day during a brazen attack. It isn’t long, though, before it’s realized that time traveling Kang the Conqueror is behind things, and a new ripple emerges. Soon after, the shit hits the fan, as attacks target Earth and other realms, and the baddie uses his ability to fold time and space to create the patchwork world that is Chronopolis. One that combines Manhattan with Noir Manhattan and Nueva York, plus Asgard, Ancient Egypt, K’un L’un, the Wild West, Attilan, and even a Medieval Kingdom. Of course, these are just some of its connected realms, which total a whopping eighteen different regions.

Thus, many of Marvel’s biggest names are thrust into action, in order to stop Kang from conquering all of the worlds (and time periods) that he threatens. They do this by forming teams, which consist of around two to four different heroes at any given time, though some segments offer more. This design then lends itself to LEGO Marvel Super Heroes 2‘s more open mission structure, wherein players can tackle many of its twenty-or-so story objectives in the order they see fit. As such, going back to Chronopolis presents a menu overlay that allows folks to choose which team’s plight they would like to take on next, unless they’d prefer to free roam which is also an available option.

This very large-scale storyline spreads itself throughout the realms, and does a good job of incorporating many different Marvel characters. The good guys are numerous, and are often led by the Guardians, Spider-Man, Captain America, Miss Marvel and Doctor Strange, but the bad guys also show up in spades. It’s not uncommon to come across two or three familiar supervillains during one mission, especially those containing Spider-Man, who gets to go up against the Green Goblin, Doctor Octopus, Kraven, Shocker and more. Hell, there’s even a neat battle against a combined symbiote.

That isn’t to say that this is a perfect, or award worthy narrative. It’s solid, comics-based superhero stuff, but sometimes gets caught up in trying to do too much and spreads itself too thin with all of the teams, worlds and time periods it has to juggle. Kang also doesn’t factor in as much as he maybe should, as he mostly meddles from afar and taunts the heroes as they try to take him down.

As interesting as Chronopolis is as a setting, it also could’ve offered more, especially in terms of open world gameplay. I get that this series aims its sights towards younger gamers more than it does us adults, but more polished side content would’ve been appreciated. As it stands, there are criminals to defeat, bosses to battle, collectibles to find and races to complete, along with the occasional side quest. None of it really stands out, though, and it’s pretty much just typical LEGO game fare, with the end goal being to collect studs, minikits and golden blocks.

The races, themselves, are especially disappointing, because the game world doesn’t exactly lend itself to them. Streets can be chaotic, what with flying and land-based vehicles, and sometimes control and geometry issues make things difficult for the speeding player. 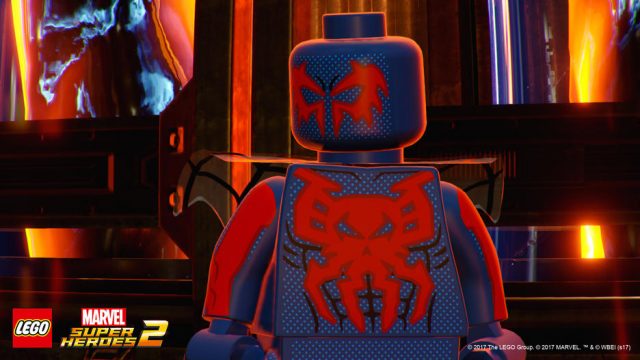 The campaign takes front and center stage here, though, and does a good job with that honour. It’s lengthy, has lots of missions and is always up for some good-natured comedy. Highlights include fighting Kingpin in 1920s New York, exploring a trap-filled pyramid with Hulk, and a Coliseum battle that brings to mind a specific segment from Thor: Ragnarok. Some of the missions are better than others, though, and not all hit like intended. Still, it’s a very solid campaign, and one that should really please Marvel’s many super fans.

Of course, with this being a LEGO game, those familiar with this series will know almost exactly what to expect from this outing. LEGO Marvel Super Heroes 2 is a LEGO game, through and through, and that sometimes hurts it. If the core gameplay was as creative and varied as some of the set pieces and worlds that surround it, this game would be receiving honours. However, at the end of the day, it’s the series’ traditional and sometimes boring mix of block breaking, building and puzzle solving that permeates throughout. The combat remains pretty simple, and there’s little variety for those of us who’ve come down with LEGO fatigue.

It was definitely nice, though, to see so many characters getting involved in the action, with the Guardians and Doctor Strange getting to play a much larger part, along with the mediocre Inhumans and alternate versions of Spider-Man. Hell, even Gwenpool factors in, and has her own mission control/cheat unlock room within the Avengers’ mansion.

Some characters can also be altered at the press of a button, like the stalwarts Bruce Banner/Hulk, Peter Parker/Spider-Man and Tony Stark/Iron Man. What’s kind of neat is that you can also take Baby Groot and turn him into full-sized Groot, or shrink and enlarge other characters who share that ability. This sometimes factors into puzzles, too, as you’d expect.

For the most part, LEGO Marvel Super Heroes 2 performed well on our PlayStation 4 Pro, and didn’t suffer from much in the way of performance issues until its final stage. With everything going on, and it being the best-looking LEGO game to date, that was nice to see. Almost all of the action was smooth and played out as it should’ve, as a result, but this performance was unfortunately marred by a couple of progression-blocking bugs that showed their ugly heads.

During the Coliseum battle, my next objective was to use Cap’s shield to hit one target, bounce off of it, then hit another. This would unlock a door of sorts, and would then usher in another hulking opponent. Well, that didn’t happen. It seemed to work properly the first time I tried it, but the door never opened and I spent more than ten minutes wandering (and flying) around the area in an effort to find what I’d been missing. I even tried the shield thing several more times, but it’d just bounce back to me. This eventually led to me caving and quitting back to the map, before trying again later, at which point it worked as intended.

Then, in one of the later stages, Spidey, Iron Man and Star-Lord were supposed to enter a tram that would take them to that level’s boss. Well, the prompt to enter didn’t immediately show up, so I jumped on as Spider-Man, then proceeded to do the same with one of the others. At that point, Peter Parker’s alter-ego got caught up in the tram and kept glitching. It prevented me from riding the vehicle to the boss, and forced me to quit out. And, with this game’s lack of saved mission checkpoints, that meant having to start over.

These were the two most prominent issues I had while playing this game, and it’s too bad that they emerged, because they put a damper on an otherwise solid title. Sure, there were some other more minor problems, like the odd control prompt not working or appearing right away, but nothing major or anywhere close to game breaking. Just these unfortunate progression blockers, which really stood out because they made me replay entire segments of two different levels.

On the audio side of things, it’s tough to find much to complain about. The music is fitting, the sound effects are right at home in both a comic book game and a LEGO one, and everything goes along with this sequel’s comic book look. The voice acting is especially strong, and whoever came up with the idea to have J. Jonah Jameson set the stage for each level (via Daily Bugle webstreams) deserves a raise.

At the end of the day, LEGO Marvel Super Heroes 2 is one of TT Games’ better efforts, and stands out in what is getting to be a far too crowded series. It’s a very solid, colourful, comical and lengthy adventure, and one that I’m sure I would’ve enjoyed more if it hadn’t been for the aforementioned bugs and the LEGO fatigue I’ve come down with. This game also deserves credit for being good-looking and big, while avoiding all of the technical issues that recently plagued The LEGO NINJAGO Movie Video Game.

**This review is based on the PS4 version of the game, which we were provided with.**

LEGO Marvel Super Heroes 2 Review
LEGO Marvel Super Heroes 2 is easily one of the better LEGO games to date. Still, it could've been better had it been more polished and offered more in the way of variety. The tried and true LEGO formula has been getting a bit stale for a while now.
Visuals80%
Audio83%
Gameplay71%
Storyline73%
The Good Stuff
The Not-So-Good Stuff
2017-11-21
75%Overall Score
Reader Rating: (0 Votes)
0%