The company that refuses to let older consoles go to die is continuing on with their mission. Hyperkin has announced their upcoming Ultra Game Boy for a late-Summer release.

Gizmodo got its hands on the newly-revealed console, admittedly still under development and subject to change, and there a few upgrades to the system from Nintendo’s original design. 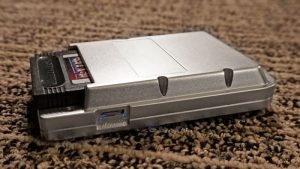 For starters, the unit eschews big-N’s plastic exterior for aluminum. It will include a six-hour battery that is rechargeable via USB Type-C, and boast a pair of stereo speakers for improved audio. There are even left and right audio out connections, primarily for chiptunes artists.

The hardware boasts virtually identical volume and contrast dials to the original handheld, but adds in an RGB-lit display so that you don’t need to always have the lights on while you play. Ultra Game Boy is styled after the Game Boy Pocket which was a slimmer version of Nintendo’s console released seven years after the original.

Hyperkin says the Ultra Game Boy (the name is tentative, but is a nice nod to Nintendo’s own Super Game Boy add-on for SNES) will be compatible with all Game Boy games and Gizmodo notes that it may also play Game Boy Color games, though it remains to be seen if that will be the case. The publication didn’t elaborate further.

The manufacturer isn’t about pirating games, just about allowing people to play cartridges they already own. So, for any Game Boy cartridge with a battery for save files, time to get out that trusty proprietary screwdriver (or pick one up online), replace the cell in there, and get back to gaming!

Hyperkin is targeting a late-Summer release for Ultra Game Boy at a price “under $100.” We’ll keep you updated on this great new (old) product!