Nintendo never ceases to amaze with out-of-this-world ideas that, in all their insanity, may just work.

The company announced Nintendo Labo today, a modular, build-it-yourself accessory system built with cardboard. Two sets were announced, and each contains a Nintendo Switch Game Card as well as a series of cardboard templates with which to build various contraptions to house your Nintendo Switch display and its Joy-Con.

“For example, you can make a functioning 13-key piano that brings your musical arrangements to life once the Nintendo Switch console and Right Joy-Con controller are inserted,” Nintendo explains in their announcement. “As you play, the IR Motion Camera in the Right Joy-Con detects which keys are pressed and plays each note through the console’s built-in speakers. Budding musicians can also experiment with their own musical creations.”

“Or, you can take control of your very own motorbike by constructing a functioning set of handlebars, with a Joy-Con inserted in each side and the Nintendo Switch console cradled in the middle,” the announcement adds. “Simply hit the ignition button, turn the right handle to engage the accelerator, and watch your adventure unfold on the Nintendo Switch screen, as you race to new destinations.” 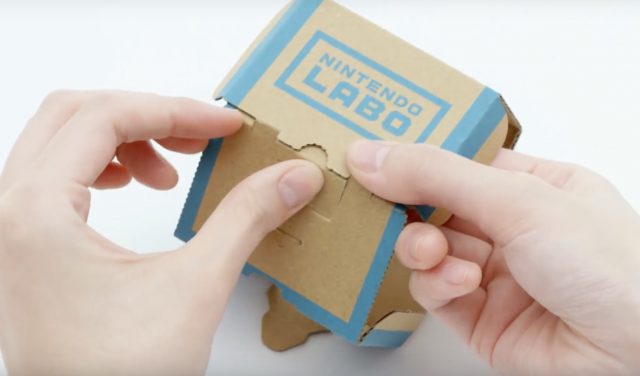 Called Toy-Con, a cheeky reference to the system’s controllers, the Variety Kit will include an assortment of smaller templates and a variety of games with which to use them. The Robot Kit will include one game (what looks to be Shigeru Miyamoto’s Project Giant Robot from E3 2014) and a much larger cardboard template that turns into a backpack and quasi-virtual reality setup.

Nintendo will also offer a Customization Kit which really consists of stickers, decorative masking tape, and some stencils to make the brown cardboard a little less, well, brown cardboard.