With maps inspired by the climactic battles that took place at the end of World War 1, Battlefield 1‘s Apocalypse DLC sounds like it’ll live up to its name. Adding to this are the details that have come out today, through developer DICE and publisher Electronic Arts.

What is perhaps the juiciest of these reveals is news of an Air Assault mode, wherein frenetic dogfights between players can lead to showdowns with air ships. This mode will be joined by some new weapons, unlockables and assignments and, of course, additional maps.

PASSCHENDAELE: Once the quiet countryside of Belgium, now a nightmarish landscape of blood and mud. Claw your way across the devastated landscape and huddle for cover in dugouts and tattered ruins.

CAPORETTO: Fight in mountain trenches near the Isonzo River as the Austro-Hungarians face off with the Italian army in an uphill climb.

RIVER SOMME: The scenic wheat fields by the Somme river transform into hell on earth from devastating artillery barrages. 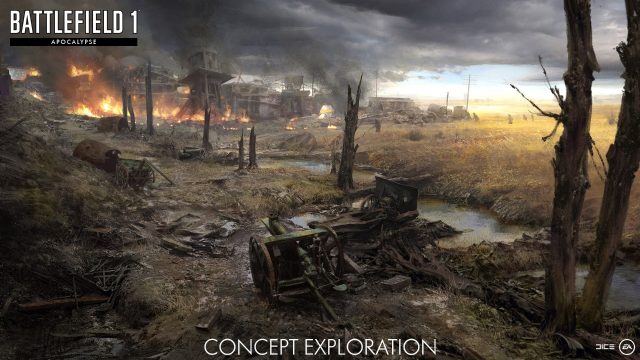 Air Assault, itself, will also introduce two aerial maps of its own:

RAZOR’S EDGE: Engage in frantic dogfights among snowy peaks, as British and German aces fight for control on this intense map.

LONDON CALLING: With your fellow knights of the sky, join the aerial clashes high above the British capital in the new Air Assault game mode.

Now that we’ve got the battlefields out of the way, here’s what remains in Apocalypse’s digital roster:

New melee weapons: Desperate times call for desperate measures. Use melee weapons like a brutal meat cleaver or a handy prybar when the action gets close and personal.

New gadgets: Dominate the opposition with gadgets like the AA Rocket Gun for the Assault Class. Assist airborne teammates and deliver serious damage to enemy aircraft.

New stationary weapon: Based on the tactics used during the Battle of Caporetto, smother your enemy in a cloud of poisonous gas with the all-new Livens Projector.

New assignments: Put your skills to the test in a set of challenges. Unlock new weapons with Weapon Assignments, and complete Service Assignments to be rewarded with Specializations.

New specialization type: Afflictions: For pro players keen to show their skill in any situation, Afflictions will hamper your soldier in various ways. Activate “Mortality” to lose 200 score for each respawn, or challenge yourself with “Paranoia” and play with the Gas Mask on constantly.

New unlocks: Give it your all on the battlefield and add new Dog Tags, Service Stars, Codex Entries, Medals, and Ribbons to your collection.

Battlefield 1‘s Apocalypse add-on will be made available to Premium Pass owners next month.