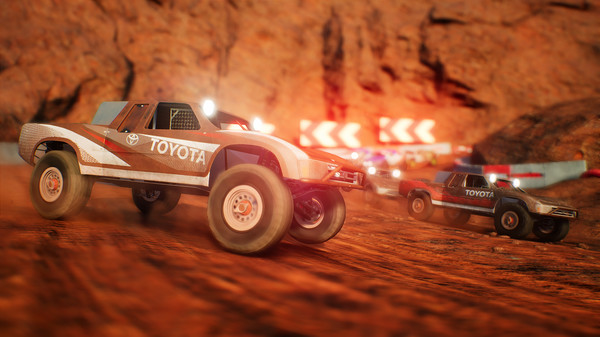 Good arcade racers have been few and far between these days. Need for Speed has become a vessel for micro-transactions, DiRT has ventured towards more realism and all that’s really left in terms of triple A releases is the Forza Horizon series and Ubisoft’s yet-to-be-released sequel to The Crew. Burnout Paradise’s remaster doesn’t count because it’s an updated version of an older game.

In the rearview mirror lays the heyday of arcade racers, but that doesn’t mean that the genre is dead or anywhere close. Although it’s not getting the same amount of releases, or as much coverage as it once did, it’s still responsible for two of the best Xbox One games. Other combatants are also entering the ring, albeit slowly, with one such title being Gravel, a DiRT-inspired racer from the folks at Milestone S.r.I.

Similar in name, but different in design (at least when it comes to recent comparisons), Gravel isn’t afraid to show its influences. Featuring lots of balls to the wall arcade racing, it’s an homage of sorts to the first several DiRT games. The ones that came before DiRT 4 and DiRT Rally, both of which are a lot more realistic and challenging than what put that series on the map.

Now, before we get ahead of ourselves, it’s important to note that Gravel is not DiRT 4’s successor, nor is it technically the better game. What Milestone has created is fun, frenetic and engaging, but it is not as polished as Codemasters’ efforts. It does scratch an itch, though, and is pretty good for a first attempt, not to mention a budget title.

When I reviewed DiRT 4, I applauded its attention to detail and realism but voiced my disappointment about how rally focused it was. As someone who found DiRT Rally too rigid, difficult and demanding, I was excited for the series’ next numbered installment because the previous three (plus Showdown) were so much fun. They never took themselves too seriously, and were always fun arcade racers, first and foremost. That all changed with the fourth game, which was more or less Rally 2.0, albeit with a less demanding difficulty. Sure, it had some other modes, but they only made up a fraction of its career, which was dominated by two different types of repetitive rally events.

Gravel is best described as an adrenaline-fueled motorsport experience, where more than just dirt flies. Cars soar, chassis scrape against each other, and opponents’ aggression always needs to be taken into consideration. It’s a fast and unapologetic experience, which eschews meaningful depth and context for speed, and that’s just fine.

Those who give this new IP a chance will find a relatively robust single player campaign, alongside free play, time attack, weekly event and (basic) online multiplayer modes. In comparison to some of its peers, Gravel is a bit light in the loafers, but it’s also $10 cheaper than most new releases. What’s important is that it’s fun and replayable, though it’s also pretty customizable.

Everything you do in this game is covered by something called the Gravel Network, which is Milestone’s idea of a one-dimensional channel that shows nothing but fast-paced racing aimed at testosterone filled viewers. It’s cheesy and somewhat over the top, and also features a British announcer whose lines get repetitive really fast. It’s something, though, and at least it shows effort.

Thankfully, the announcer only appears during pre-race segments, and can be skipped with ease. He mostly just talks over repetitive footage of the player’s car waiting at the starting line, and is gone with the press of a button. He serves a purpose, though, and that is to help create the feeling that one is taking part in a new season of a televised competition called Off-Road Masters. We’re the newcomer, you see, and it’s up to us to dethrone the cheesy and stereotypical veterans who normally litter the podium at the end of each season.

The career mode spans more than sixty events and offers players a total of 180 stars to collect. It’s presented in tiers, which are comprised of a few themed series that precede special events. These themes normally have to do with vehicle types (cars, trucks), time of day and weather, and the special engagements that follow them are almost always of the one-on-one variety. Sometimes tournaments will appear, but they’re just a combination of three different events that dole out points at the end of each engagement and then total them up at the end.

One thing Gravel is good at is keeping things exciting. Despite being somewhat of a budget priced release, it has a lot of tracks, all of which are set in close to twenty different real world locations, including Quebec, California, Namibia, Norway, Alaska and Las Vegas. Thus, there’s a very good mix of surfaces (dirt, snow, pavement) and environments (desert, tropical, city, mountainous) to speed through within the game’s fifty plus track configurations.

Like SEGA Rally before it, this racer features track deformation, meaning that every vehicle will create its own ruts and trails around tracks that are made up of either dirt or mud. This adds some challenge, especially on higher difficulties, because one must thoughtfully navigate across or around these courses at high speeds.

You’ll also find a good amount of variety in Gravel’s event types, which are categorized within four different disciplines. There are lots of lap races, many checkpoint events that bring Forza Horizon to mind, and more, including elimination, time attack and rally cross variations. These pit you against seven named racers, none of which are afraid of denting their rides.

Among these laps, checkpoints, straightaways and figure eights resides something different, that being the smash events. These are (predominantly) brief and timed engagements that are reminiscent of the kid’s game, Red Light, Green Light. Think of a line of panels, which are told to randomly display either a green arrow or a red X and you’ll have an idea of how this works. The only other thing that you really need to understand is that even just tapping a panel with an X on it will eliminate all of your speed and momentum. Your goal is to only drive through the boxes with the green arrows on them.

Like some of the time trials, these smash challenges are frustrating. You can put forth a very good run, yet end up outside of the top three. Even the early ones require almost near perfection, else you’re looking at a fifth to eighth place finish.

Good thing Gravel’s progression system is player friendly, even if its uneven difficulty (which spikes early, then gets easier for whatever reason) isn’t always that way.

Earlier in this review, I mentioned that 180 stars are up for grabs during the Off-Road Masters career mode. All of those are spread throughout sixty different events, not counting the special ones that don’t dole out stars. Through this system, one can earn up to three stars in almost every in-game event, and the way that they’re dispersed is pretty smart. Simply finishing will earn you one star, making it onto the podium will get you two, and coming in first place will grant you all three.

Through this intelligently designed system, it’s possible to beat this game without coming in first in all of its engagements. To unlock its final championship (which is made up of several events, one of which is a final head-to-head challenge), players must earn at least 120 stars, meaning that a third of them are unnecessary. That is, unless you’re an achievement addict, because unlocking the full 1000 points will force you to earn every single star.

Everything you do, be it a sick drift, a perfect landing or a first place finish, will also give you experience points that add up over time. These accumulate and allow you to increase your driver level, with each new level gifting the player more licensed cars and liveries. Manufacturers include General Motors, Ford, Toyota and Porsche, the latter of which has its own paid car pack. There are only two problems with this system: 1) Player levels carry over into multiplayer, meaning that online engagements aren’t always fair, and 2) Beating the campaign automatically unlocks all cars and gives you the achievement for doing so.

With all that having been said, I must admit that Gravel scratched an itch that DiRT 4 didn’t. It may not be as polished or as realistic, but it’s definitely more fun at times, because it avoids the repetition that set in with Codemasters’ latest. Unfortunately, that lack of polish ends up biting Gravel in the ass, because it’s not without its glitches and performance problems.

We reviewed this game on an Xbox One X, and installed two patches over the course of our time with it. Still, even after two large updates, the game would randomly stall to the point where it almost seemed like it was going to freeze. This happened a few times during the single player campaign, and once online, at which point the bots (I could only find two other humans online, after dealing with network errors before that) raced ahead of me. That said, the 20 some-odd second freeze seemed to hit everyone during that race, because once I regained control of my car I drove past those same bots and opponents who were, themselves, frozen in space.

Hell, I even won the race.

The third time I played Gravel, I downloaded a free car from the marketplace, and it installed without me needing to quit out. However, when I tried to continue my career, every race I started presented the same glitch, that being an invisible car. I could see and follow my driver as he steered, shifted gears and the like, but could not see the car he was sitting in, nor could I compete, because it’d constantly tell me that I was going the wrong way. This glitch eventually went away once the game was closed and then restarted.

The only other notable problem with this one is its floaty handling. You get used to it after a while, but it’s definitely cumbersome. Rainy asphalt or mud will send you spinning around corners much like ice does in snowy stages, and it’s not uncommon for one to lose ground because of this. Thankfully Milestone implemented an unlimited rewinds feature, which helps eliminate a lot of potential frustration.

When the sun is shining, Gravel sometimes manages to look pretty good, but it’s no Forza Horizon 3. At other times, visibility is far too limited, due to poor headlights, dark time of day settings and weather that can all make it hard to see much of anything. There’s also nothing in the way of HDR support for Xbox One, so keep that in mind.

The sound is fine, but is also far from spectacular. Sound effects are basic, and are limited to vehicular sounds the likes of engines, accidents and tires. Outside of them, there’s the repetitive announcer and an even more repetitive soundtrack that is made up of the same few hard rock instrumentals.

At the end of the day, Gravel is a fun and welcomed breath of fresh air, albeit one that comes with several caveats. DiRT’s conqueror, it is not. It is, however, an enjoyable game for people who’ve been wanting a balls to the wall arcade racer.

Gravel Review
Gravel is an entertaining, adrenaline-fueled racer, but a flawed and sometimes buggy one at that. It's well worth checking out, but could've used some more polish.
Visuals70%
Audio62%
Gameplay70%
Storyline56%
The Good Stuff
The Not-So-Good Stuff
2018-03-10
65%Overall Score
Reader Rating: (0 Votes)
0%