Square Enix promised us a full Shadow of the Tomb Raider reveal, and they delivered that last night through events held in Montreal, London and Los Angeles. As such, we now know more about the much anticipated sequel to the series’ fantastic 2013 reboot.

“Thanks to their incredible expertise, knowledge of the franchise and outstanding creativity, Eidos-Montréal, in collaboration with Crystal Dynamics, is delivering a powerful experience with Shadow of the Tomb Raider,” said Yosuke Matsuda, president and representative director of Square Enix Holdings Co., Ltd. “Shadow of the Tomb Raider will take the series to new heights and Lara Croft to new depths.”

Starring Camilla Luddington, who once again lends her pipes to the game’s iconic heroine, Shadow of the Tomb Raider sends Lara on a journey to prevent a Mayan apocalypse. Thus, you can expect to find yourself running, shooting, climbing and spelunking through a jungle and its assorted cliffs and caverns. Not to mention “terrifying tombs.”

“Shadow of the Tomb Raider will challenge Lara Croft in new and unexpected ways,” said David Anfossi, Head of Studio at Eidos-Montréal. “Our team has created a diverse set of skills, combat techniques and equipment for players to master, and they’ll certainly need them if they hope to survive the deadly jungle environments and tombs.”

Those in attendance got to see the game in action, while the Internet at large got another trailer to gawk at. Unfortunately, this new look at the game is fully CG, meaning that there’s no gameplay to speak of. It is easy on the eyes, though, thanks to some impressive visuals and a good amount of harrowing action.

Shadow of the Tomb Raider will be released onto the Xbox One and PlayStation 4 families of consoles, as well as Windows PC, on September 14th. You can pre-order it now, though you may wish to wait until its Deluxe, Croft and Ultimate Editions are detailed. 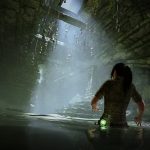