Closing out this year’s EA Play Conference for E3 2018 was an extended look at Anthem, the upcoming shared world action game in development at fan-favourite EA subsidiary studio, BioWare. Some more gameplay was shown for Anthem, including a glimpse of how it functions as a single-player game, a co-op game, and a live service game, as well as how players can customize their Iron Man-like flying survival suits, the Javelins.

The Javelins will be divided into four classes, including the well-rounded Ranger that’s good for close and ranged combat, the heavy Colossus that’s all about explosive, unwieldy firepower at the cost of speed and precision, the enigmatic Storm, which appears to be a skill-based specialty Javelin filling the spot of the obligatory ‘magic’-based class, and finally, the deadly Interceptor, which BioWare was a little more quiet about, but it nonetheless appears to be the slick, speedy answer for players who want to sacrifice protection for more aggressive and agile strikes. You won’t have to commit to just one Javelin either, since BioWare made sure to stress that you can change Javelins at will, should you grow tired of one class, and want to change your character to another, without losing any EXP in the process. 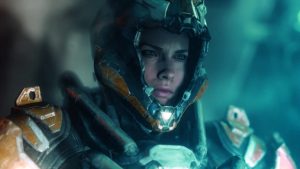 With an emphasis on customization, some players may naturally be worried that Anthem will indeed pack itself with the ever-controversial loot box mechanics that ended up getting EA’s much-maligned Star Wars: Battlefront II in hot water with gamers, parents, pundits, activists and even government officials. Well, worry no longer, as BioWare has bluntly stated that there will be no loot boxes whatsoever in Anthem, nor will there be pay-to-win advantages. There will nonetheless be microtransactions in Anthem, which some players may still be understandably grumpy about, though a small consolation is that they will only be in place for cosmetic purchases that don’t affect gameplay, in case you want to pay a small tip to further personalize and outfit your preferred Javelin to better make it your own.

We’ll be able to judge for ourselves how Anthem turns out when it releases early next year, and fortunately, BioWare did close out their preview of the game by confirming when it will see release. Anthem will be available to the general public on February 22nd, 2019, for PlayStation 4, Xbox One and PC. Those who subscribe to EA’s newly-announced Origin Access Premier service however will get early access to the PC version on February 15th, 2019. The release date of Anthem was originally claimed to be February 19th, 2019 in separate reports, though this may refer to the expected early trial period for Xbox One players with an EA Access subscription, who have traditionally been able to get their hands on EA titles a couple of days ahead of their public releases in some form.

Keep jetting over to Eggplante for all major news and updates on Anthem, and other high-profile BioWare projects.