On this night, the National Hockey League once again held its annual awards show among the glittering lights, high rollers and gambling addicts of Las Vegas, Nevada. This year’s festivities were a bit different, though, because they followed the Vegas Golden Knights’ first, incredibly successful year in the League, during which they stunned everyone by making it all the way to the Stanley Cup Finals.

As is customary, the next iteration of EA Sports’ NHL video game series was also given some detailing during the event. At the same time, its cover athletes were also revealed. Unlike in past years, no public vote was held, and the developer decided to shake things up by putting two different stars on different versions of its upcoming sports game.

This time around, Nashville Predators star P.K. Subban will appear (in mustard yellow) on the standard versions of NHL 19. However, those who opt to spend more money will find the Great One, Wayne Gretzky himself, on the covers of both NHL 19‘s Ultimate and Legends Editions.

“Growing up, and still to this day, my friends and I love seeing who is on the cover and ultimately getting to play the game,” Subban said in a statement.

“Being the cover athlete for ‘NHL 19,’ for me, represents growth within our sport, embracing different personalities, and showing that anything is possible. I’m honoured to be able to sport the Smashville colours on this year’s cover.”

Although NHL 19 won’t feature the new engine that fans have been clamoring for, it will introduce a few notable improvements. Things like RPM Tech (for better skating and related animations), outdoor hockey and approximately 200 legends, including Number 99.

During an interview with Polygon, EA Sports’ Burnaby studio also talked about an increased focus on online play. This has resulted in new multiplayer options, which will all be housed within a new arena called World of CHEL. It’s here where hockey loving gamers will be able to play EA Sports Hockey League, compete in games of NHL Threes (which debuted in last year’s NHL 18), and engage in an online practice mode called NHL Pro-Am. What will also be housed there, though, is something called NHL Ones, which is a way to get people playing online without too much intimidation. It’s set on an outdoor rink that is nestled within the Canadian Rockies, and carries the tagline “From the pond to the pros.” 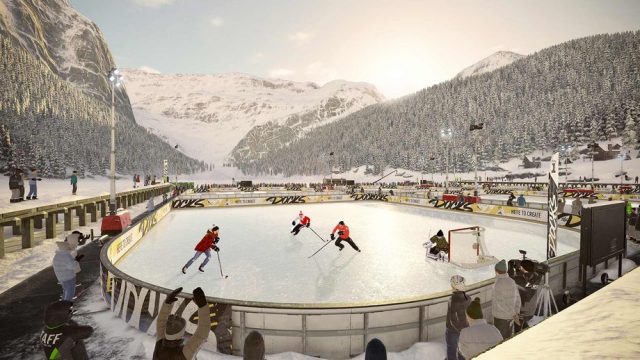 EA Sports’ Real Player Motion technology (which was introduced in FIFA 18) will also be a part of NHL 19, allowing for more realistic gameplay and animations. Through it, the game is said to feel more responsive.

Last, but not least, is news that Franchise mode will be adding a new scouting setup, which will give players a scouting budget that must be managed. This will evolve into something that is said to be “deep enough to be a standalone product,” wherein users will be able to hire, fire and control their scouting personnel and the players that they target.

NHL 19 will drop its digitized puck on September 14th.