Tag is an interesting combination of heartfelt sweetness and twisted cynicism. It simultaneously celebrates and mocks the idea of grown men who still play a childrens’ game thirty years after starting, as a means of staying in contact. Making the emotions at play even more complicated is the fact that Tag is also based on a true story, about ten actual grown men who still play tag to this day in real life, and have been playing tag for almost the same length of time.

Tag, the movie takes some liberties with the true events, namely by shortening the character ensemble to five men instead of ten, and adding all-new story elements to predictably make things more ‘Hollywood’-friendly. Outside of that however, it’s legitimately amazing how many comedic set pieces in the movie are actually taken from the increasingly ridiculous real-world lengths that these real-life men have gone to in order to keep tagging each other and avoid being ‘it’, as the one who is ‘it’ when the tag month is done (it’s May in the movie), gets to enjoy a year of ritual humiliation until the next game starts.

This is indeed a comedic premise that is rife with potential, and when Tag picks a tone and sticks with it, it generally delivers some hearty laughs. Warner Bros. may have ultimately made a slightly bigger splash with their similarly spirited comedy, Game Night earlier in the year, but Tag is another solid comedy that keeps 2018’s hot streak of surprisingly good R-rated comedies going strong. If you’re looking for some undemanding, satisfying giggles for yourself and your adult friends, then Tag is certainly worth the trip to the theatre.

Tag’s ensemble of leading men more or less all play to type. Ed Helms is an obliviously optimistic troublemaker (Hoagie), Jon Hamm is the well-presented and successful charmer (Callahan), Jake Johnson is the aimless burnout (Chilli), Hannibal Buress is the soft-spoken head case (Sable), and Jeremy Renner is the super fit ‘perfect’ guy who has never been tagged in thirty years, much to the envy of his buddies (Jerry). When Hoagie tells the other guys that Jerry is retiring after the upcoming May ‘season’ of their ongoing game of Tag, that proves to be the inciting incident for the five childhood friends to briefly step out of their lives to try and tag Jerry before he quits the game, dragging along exasperated Wall Street Journalist, Rebecca, played by Annabelle Wallis (reuniting with Johnson after they starred together in last year’s dismal reboot of The Mummy), and Hoagie’s ultra-competitive and brash wife, Anna, played by Isla Fisher.

Even with the male leads all playing to type, Tag has assembled a group of very funny actors, and their chemistry easily manages to shine through some very diverse and unique personalities. Sometimes, the sharp contrast between the leading men begs the question of why they’re trying so hard to stay in touch in the first place, since they seemingly have nothing in common in adult life, but perhaps that’s part of the sweet charm behind the otherwise dark, slapstick-heavy humour. That’s why it’s a little distracting when the movie suddenly tries to break from the silliness in favour of acting more serious and introspective, which, to be frank, it’s not very good at. There’s an especially serious turn for the guys towards the end of the movie that feels genuinely head-scratching as well, especially since the majority of Tag is otherwise so devil-may-care and ridiculous.

Despite this being an outwardly male-driven movie however, the female leads do manage to keep up the laughs very well themselves, so don’t expect Tag to be a ‘guy flick’ per se. In fact, it’s often Fisher that’s the easy comedic standout as Anna, a comically over-the-top, screaming psychopath who incessantly eggs the guys on, especially her husband, despite being an otherwise well-adjusted wife and mother. Rashida Jones and Leslie Bibb also add some more effective funny women to the movie later on, as Callahan’s and Chilli’s childhood love interest, and Jerry’s put-upon fiancee, respectively. Yes, despite the ‘no girls allowed’ rule that’s apparently in place with this Tag game, the women still find plenty of places to shine in terms of chuckles, despite all of the actual Tag players being men. It’s really the characters that sell the movie most of all, and this is strengthened all the more when you know that their otherwise exaggerated gags are nonetheless coming from a real-world place.

I’ve more or less already summed up everything you need to know about the storyline of Tag. As far as comedies go, it has a straightforward hook, but still a refreshingly original one. Its actual jokes are also universal, in the sense that they’re built around over-the-top pain and failure, which it sometimes leans into too much, though almost never to the point of completely forsaking the fun. Again, the characters in Tag feel sharper than the story, which does occasionally feel a bit confused in terms of how it actually wants to convey its message, even if the underlying message about finding any means necessary to keep your friends close within your busy adult life is still a great one. 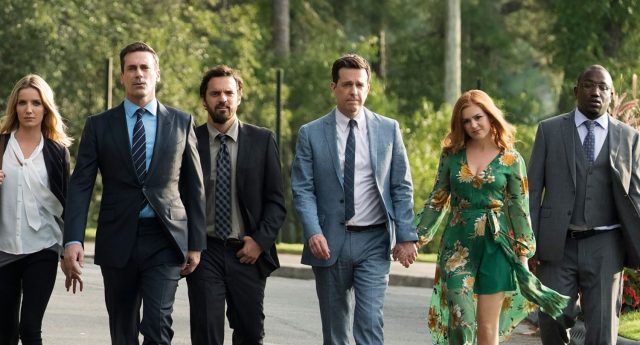 As I also mentioned, Tag falls pretty flat when it tries to be more serious as well. The final stretch of the movie is especially bad for this, sometimes creating the impression that Tag is a comedy that eventually runs out of gas in its final handful of scenes. The ending is a bit of a mixed bag most notably, since it does a decent job of bringing the movie’s over-arching themes home, but also at the expense of a needlessly abrupt heel-turn that disturbs too much of the digestible fun. Fortunately however, that does leave most of Tag’s plot to run at a healthy and brisk comedic pace, even if those final minutes are really a doozy.

Tag is directed by Jeff Tomsic, making his feature film directing debut here, after extensive experience with directing television. Tomsic is best known for directing episodes of cult comedy shows like Broad City and Idiotsitter, and Tag is likely the most mainstream project that he’s ever helmed to date. Fortunately, Tomsic really throws himself into the production, injecting quite a lot of high-powered energy into the movie’s slapstick humour, which really helps sell even some of the weaker jokes. This energetic direction is best exemplified in a pretty deliberate effort to satirize Warner Bros.’ own recent Sherlock Holmes movies with Jerry’s character, who quickly recounts his defense plans during slow-mo shots that are adapted pretty much exactly from similar ‘quick thinking’ moments that were used by director, Guy Ritchie for Robert Downey Jr.’s Sherlock Holmes portrayal.

Even outside of the actual Tag scenes, which show Tomsic’s clear skill with directing adult slapstick (not an easy task when most slapstick-driven humour seems to be designed for younger audiences), the other scenes also manage to display a great passion for the writing. This is a comedy where the actors are very clearly having a great time filming every single scene, and that shines in their over-the-top, but effectively funny performances. Some viewers may be a bit annoyed at some of the loud, scream-heavy gags, which may not be to everyone’s tastes, but as long as you can handle the in-your-face style of comedy, you’ll find that Tag works very hard to make you laugh, and that’s something to be appreciated.

When it’s made in the carefree spirit of the titular game, Tag really is hard to dislike, since it clearly has a very big heart. Not every joke works, and not everyone will perfectly take to the over-the-top, surprisingly cartoon-ish sense of humour in a comedy that’s supposed to be based on a true story, but if you’re willing to embrace its wired, childish attitude, Tag is a pretty good Summer comedy. It’s not this year’s only Summer movie that delivers solid laughs of course, since Avengers: Infinity War, Deadpool 2, Incredibles 2 and Ocean’s 8 are all filled with standout humour themselves, but Tag is probably the best dedicated comedy that the Summer 2018 season has managed to deliver so far, easily outclassing the sub-par Life of the Party and the especially bad Action Point.

Even if some of the tone behind the comedy can get a tad clumsy, you’ll still feel empowered and inspired by Tag in the end, since it urges you to celebrate friendship, and do what you have to do to keep your unit of longtime friends together, whether it’s trivia, video games, bar nights, karaoke, book club, knitting, going to the movies, or, indeed, supposedly ‘childish’ playground games like Tag. Isla Fisher’s character even jokingly suggests gangbangs at one point, and I’m sure that will indeed be a valid option for a select few (no judgment!). Whatever the case, Tag breaks through its otherwise dark sense of humour to remind you that your friends are among what matters most in life, and no job, no wealth, no station, or no anything is worth sacrificing the friends that keep you tied to your inner child and your passion for living.

Tag may bluntly and repeatedly spell out its ideals of always finding ways to play with those you love, so you never truly grow old and miserable, but it’s still an ideal that many viewers will be able to easily get behind and appreciate. The frequent laughs they’ll enjoy with this movie along the way certainly won’t hurt either!

Tag Review
Tag is a spirited and funny adult comedy that offers an effective celebration of the need for friendship, and indulging your inner child!
CHARACTERS80%
PLOT70%
DIRECTION75%
THE GOOD STUFF
THE NOT-SO-GOOD STUFF
2018-06-22
75%Overall Score
Reader Rating: (0 Votes)
0%