With superheroes being in vogue these days, it was high time for Disney and Pixar to bring their zany, colourful and fully animated super family back to life. After all, it’d been some time since we’d last seen The Incredibles, who made their celluloid debut fourteen years ago.

Boy, has it really been that long?

When The Incredibles 2 hit theatres last weekend, its marketing was aided by the release of TT Games’ LEGO The Incredibles, a game that was originally leaked thanks to an ad inside of a set of blocks. What’s somewhat unique about this game is that, instead of just focusing on the new blockbuster film, it also tells the 2004 original’s complete story. As such, it’s a lot like LEGO Jurassic World, which went back and retold the first three Jurassic Park movies in block form. Oddly, though, this particular release begins with the sequel before moving on to its predecessor, meaning that those who play even a small amount will spoil parts of the new movie for themselves.

In total, there are 12 different story chapters to play through, with the two movies splitting them evenly. Only the big and more memorable moments were turned interactive, yet the stories are still quite easy to follow. Of course, some creative freedom was taken to slightly alter the narratives so that they fit the humour found in LEGO games. 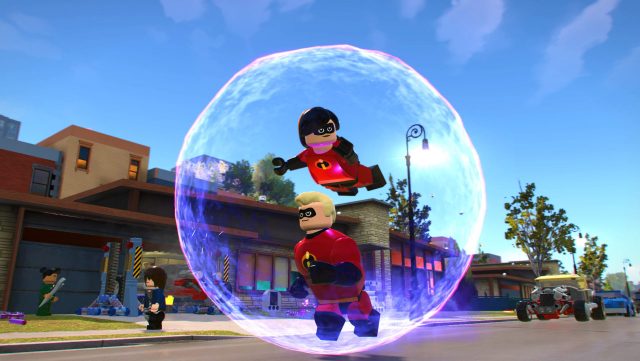 Some stages incorporate the entire Parr family, but quite a few of them don’t. It’s all based on what’s happening on screen, where in the films the levels take place and which characters were part of those particular scenes. Due to this, you’ll find a good mix of two character levels and more involved four character stages. It all works pretty well, though, and the variety is appreciated.

Oftentimes, you’ll find yourself playing as Mr. and Mrs. Incredible, or Mr. Incredible and his best friend, Frozone. However, since the second movie’s narrative is heavily focused upon Mrs. Incredible, there are more than a couple of levels where it’s just the matriarch and another, newly introduced superhero character. One is an elderly man who complains about his aches and pains, which should make you chuckle.

Working together is the theme of all LEGO games and that continues to be the case here. All of the characters have their own powers and abilities, and it’s important to combine them when need be. For example, Elastigirl can turn herself into a boat or a ladder for other characters to use, and can also snake her way through vents. Meanwhile, Mr. Incredible can throw his allies, Violet can turn invisible or shield herself and others, and Dash’s speed comes in very handy. He and Violet can team up to power machines by having Dash enter Violet’s ball-like forcefield, before using his speed to make it spin so fast that it creates electricity.

Jack-Jack also factors in a bit, and is comical in the way that he can change forms. He’s able to become a hulking monster baby, shoot fire, or multiply.

The family works together to build things, too, and that happens whenever the player comes upon Incredibuilds. These are massive constructions, and only some factor into the story. How they work is that the player must mash the B button to fill one character’s meter, then move on to the next one(s). It’s very easy, like this game happens to be (to its detriment), but the developers at least tried to make it challenging by making it so that the characters’ meters deplete when you’re focusing on others. This forces you to keep an eye on the other family members and top them up whenever need be. That said, an Incredibuild only takes thirty seconds, at most.

What’s nice about LEGO The Incredibles is that it’s varied. Unlike a lot of the LEGO games before it, it doesn’t drop you into one confined space after another, or make you solve a ton of tedious puzzles. There’s still a good amount of block breaking and subsequent building to be found, both of which factor into its puzzles. The nice thing is that there’s enough variety in most stages to help alleviate that and keep it from becoming boring or tedious. It does happen, though, as there are a couple of levels that drag on, most notably the one in which you infiltrate the enemy’s lair in the first Incredibles‘ campaign.

The developers also attempted to spice things up by separating the game’s open world hub (which consists of one town and one city, the two of which are joined by a bridge) into crime filled districts. Each area gets its own mission to tackle, be it stopping bad guys from halting the pier’s ice cream industry, safely destroying bombs that mimes plan to use to blow up the city, or dealing with evil fishermen. Villains are also behind each crime wave, creating the opportunity for extra boss fights within the open world. This adds another layer of paint to a hub that already offers races, collectibles and hidden secrets, though the crime missions can become a bit repetitive after a while. 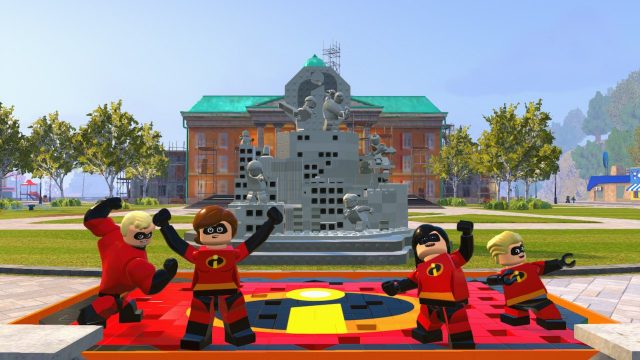 As a whole, LEGO The Incredibles isn’t as large in scale as LEGO Marvel Super Heroes 2 was. This is a good thing and a bad thing, because it means that its world is more confined and its campaign is a bit shorter than last fall’s title’s was. That said, what this one lacks in scale it makes up for in variety, which is something that Marvel Super Heroes 2 lacked at times.

When it comes to presentation, this is very much a LEGO title, for good and bad. What’s good about this is that you can expect lots of colour, a good amount of visual humour and some outside of the box takes on some of your favourite Pixar characters (including Dory, who’s unlockable and can be used for underwater races). What’s bad about this is that it’s another rushed feeling experience, which shows in its abundance of screen tearing, occasional frame rate problems and crashing bug(s). The game hard crashed on me once, and it occurred shortly after I’d started playing.

Sound effects and voice acting comprise the better part of LEGO The Incredibles‘ presentation, with at least a couple of the actors reprising their roles from the films. Either that, or they hired incredibly talented soundalikes who sound almost uncannily similar. Due to this, and some fitting music, this all sounds like an Incredibles movie and it looks like one, too. It’s just too bad that the performance isn’t what it could’ve been. Then again, that’s the curse of the licensed game, which is usually forced to meet strict deadlines based around its theatrical counterpart’s release.

Truth be told, I’ve never been a massive fan of the LEGO video game franchise, even though I’ve played and completed almost all of them. A lot of the previous ones got too tedious for me to fully enjoy, and that would lead to me burning out on their mechanics well before they concluded. Thankfully, LEGO The Incredibles does a better job of mixing things up and avoids some of the severe tedium that some of its predecessors suffered from. Thus, it’s a more enjoyable experience than most, even if it is flawed.

LEGO The Incredibles Review
LEGO The Incredibles is an enjoyable take on the incredibly popular Disney-Pixar series. It has some flaws, but even with them it manages to be one of the better LEGO titles, of which there have been many.
Visuals70%
Audio76%
Gameplay77%
Storyline85%
The Good Stuff
The Not-So-Good Stuff
2018-06-22
77%Overall Score
Reader Rating: (0 Votes)
0%