The Grail appears to be catching up with Jesse sooner rather than later, though fortunately, their return didn’t disappoint on this week’s episode of Preacher! Now that Angelville and its twisted new villains have been established, we can start bringing back some of those former thorns in Jesse’s side from Season Two, and considering that Herr Starr still holds a piece of Jesse’s soul, along with his means to wield Genesis, The Grail has become a pretty big thorn indeed! Even worse is that they’re something of a necessary evil in Jesse’s current circumstances to boot, since relying on Herr Starr appears to be the only way that Jesse can possibly escape Gran’ma, and whatever wicked machinations she has in mind for him.

“Sonsabitches” powerfully and humourously brought The Grail back into proceedings, but it also worked well because it found effective ways to keep developing the Angelville crew. Gran’ma did move a little more into the background this week, but that’s fine, since it also allowed the show to start developing key new relationships between Gran’ma’s people and Jesse’s people. Fortunately, this also means that Cassidy finally had something better to do beyond knock Jesse around and brood this week, namely when he strikes up an unlikely friendship with the awkward, perverse T.C., whom he bonds with over an afternoon of drugs, and talking about the most bizarre Lucy Liu sex dream that you can imagine. Only on Preacher, eh? 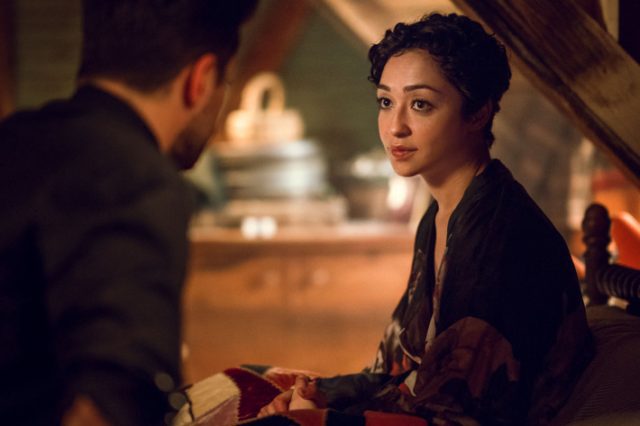 The other interesting new development that came out of Angelville’s end this week was Jody attempting to bond with Tulip. This was done by Jody allowing Tulip to play with his guns, even if he did blow up her homemade firing range first, and this tied nicely into something of a mini-climax towards the end of the episode, where Tulip actually joins Jody and T.C. in repelling the criminals that Jesse had to get the transfoil from in the season premiere last week. Cassidy is there too, mind you, humourously sporting an umbrella hat to try and hide the fact that he’s a vampire who can’t be in direct sunlight, but he’s not allowed to do much, beyond starting the big skirmish in the first place with an ‘accidental’ grenade launcher round.

The rift that seemed to be forming between Jesse and Cassidy already seems to be healing a bit this week, but there are still some lingering scars there for sure, especially when Cassidy suggests more than once to Tulip that they should just abandon Jesse to his sick family in Angelville. Tulip is against the idea however, despite openly distrusting the Grail, which is understandable, since it was one of their agents that killed her. There’s a really interesting conflict with Tulip and her loyalties brewing here too, even if it feels like a mere tease at this point, since Hoover and Featherstone end up tracking Jesse’s crew down in Angelville, only to be quickly captured. Tulip did get to let out some frustration on Featherstone, and there was a humourous scene afterward where Jesse’s party and Jody walk the two Grail agents to a meat grinder while Cassidy brings up his distaste for The Big Lebowski again (though he apparently loves Miller’s Crossing), thinking they can squeamishly kill them in it. Featherstone’s hilarious comfort singing was the perfect icing on the cake here too! 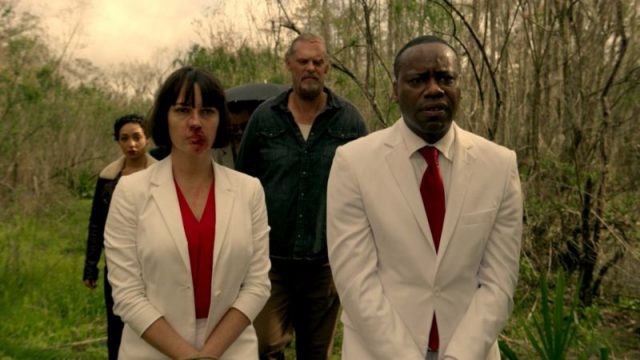 There was a potent balance of humour and dread that worked very well for most of this entire sequence, though it didn’t quite stick the landing, since the show clearly wrote itself into a corner here. Thus, Jesse had to impractically free Featherstone in order to have her contact Herr Starr, which barely affected Tulip (surprisingly), while Hoover basically disappears by magic, despite having his hands bound, and being on a very noisy wooden dock. Yes, I know there was a meat grinder active, but surely someone should have heard or felt Hoover move away if he gained that much ground, that quickly! Regardless, this was a lame escape for Starr’s right-hand goons, and one that felt like a contrived necessity, since there was otherwise no believable way to bring Herr Starr back to Jesse’s doorstep.

Regarding Herr Starr however, boy did he not disappoint this week! Herr Starr was definitely one of the brightest spots of last season, and his Season Three debut made a great impression! After an over-the-top display of shooting up an ashram (wherein all of the acolytes were carrying high-powered assault rifles under their robes for some reason!), which made for one of the most insane and funniest moments of the entire episode, Starr goes to Angelville to make contact with Hoover and Featherstone, as well as Jesse. Starr initially gives Jesse a placebo and tricks him into thinking he has Genesis back (the show even tricks audiences by putting the Genesis voice filter over Jesse for a bit), which gave Jesse a very amusing failed opportunity to tell Starr to, “Eat his dick”, but it turns out that the Grail accounted for whatever reckless plan Jesse and co. put together to try and betray them. Tulip does take down several of the Grail’s agents (enough to make the gators happy, at least), though her efforts are too early to get Jesse’s soul back, and Starr, Featherstone and Hoover all get away, with Starr declaring that he’s going to let Jesse stew in Angelville for a while, until he starts becoming desperate to genuinely ally with the Grail again.

The last remaining thing to note is that we get a bit more of a look at Tulip’s mysterious interaction with God shortly before she returned to life in last week’s season premiere, with God apparently telling Tulip to, “Get those sonsabitches!” God is clearly out for blood, but the thing is, it’s left nicely ambiguous as to who exactly God is talking about. It’s equally likely that God could be talking about Gran’ma’s crew, the Grail, perhaps Jesse and Cassidy, or even someone else entirely! It doesn’t look like Jesse at least is going anywhere fast though, as the episode ends with him bleakly doing menial mopping work for Gran’ma, and telling her other prisoners that he can’t help them. This was a fantastically dour note to end the episode on, despite, “Sonsabitches” also shining in terms of excitement and humour this week. It definitely seems like Preacher is set to deliver a more focused, well-paced third season at this point, and it was especially satisfying to see that the Grail still hasn’t lost a step as one of Jesse’s other biggest threats either!