Preacher certainly got especially exciting last week, what with the Grail making their big return, and even taking the trip up to Angelville to properly make trouble for Jesse and co. It really seems like the series is taking Herr Starr’s orders to heart now though, since this week’s Preacher episode, “Gonna Hurt”, heavily slowed the series down, in favour of quite literally stewing in Angelville. There was nonetheless some good story material here and there, especially on Tulip’s end, though disappointingly, this episode also felt weaker and less satisfying than Season Three’s previous two so far.

Tulip really did own this episode, easily possessing the best story arc this week, as she starts poking into the business of Gran’ma, and starts quickly seeking ways to get Jesse out of his blood debt. Tulip had some really standout scenes with the other characters, particularly T.C., whom she allows to show off his penis, in exchange for information on Gran’ma’s operation. It seems like the series is gradually starting to trickle out connections to T.C.’s heavy characterization as a proud pervert in the Preacher comics, and the exhibitionist scene with Tulip had just the right amount of humour and pain to make it really count!

The very uncomfortable interrogation of T.C. eventually leads Tulip to a competing witch of sorts named Madame Boyd, a character that doesn’t appear to exist in the source comics, and was completely made up for the TV show. Madame Boyd is also foreshadowed as a key competitor to Gran’ma during Jesse’s storyline, and it appears that Madame Boyd took just about all of Gran’ma’s business after Jesse initially left Angelville. That creates the perfect opportunity for Tulip to pose as an oblivious local to try and glean a loophole about getting out of Gran’ma’s napkin contracts (which apparently directly harm the contract subject if they’re physically damaged, a la voodoo dolls), though Tulip’s identity is nonetheless deduced immediately. After failing to escape in a brief scuffle, the ‘assistant’ to Madame Boyd is revealed to be Madame Boyd herself, who was apparently showing just how all-knowing she’s apparently become in Angelville. We don’t see what comes of Tulip’s fateful meeting yet, but I’m sure that will be a big focus in next week’s episode.

Jesse also covered a fair bit of ground in this week’s episode, but most of his story material didn’t feel all that consequential. All it really amounted to was just doubling down on how trapped he is under Gran’ma’s thumb, which doesn’t really tell viewers anything that they didn’t already know. There is a potentially more interesting storyline that comes from Jesse learning about another encounter that Tulip had with God at the start of the episode, with God driving up on a motorcycle to say that her failure to stop the Grail (apparently, the, “Sonsabitches” God was referring to before were indeed the agents of the Grail), was by design, and not her fault. This provides little consolation however, and Tulip increases her resolve to kick God’s ass, essentially declaring that the only reason God is on Earth in the first place is to screw around. This would line up with the source comics, wherein God is portrayed as a capricious tyrant, but the episode really missed an opportunity to further explore why God is going to Tulip and not to Jesse. Sure, Tulip doesn’t have Genesis, but if God is all-knowing and omnipotent, then why is he afraid of a power that Jesse can’t even currently tap?

Aside from the talk with Tulip about meeting God (again), Jesse basically just bumbled around with Jody some more, attempting to start paying off his debt by finding victims to entrap in Gran’ma’s curses. This doesn’t work however, so nothing of value is really accomplished here. Most of this storyline just kept repeating the same notes of the Angelville crew being upset that Jesse left, then making him suffer for it, lather, rinse, repeat. The only point where this starts feeling like it’s going somewhere is in the final minutes of the episode, when Jesse agrees to work in a place called, “The Tombs”, which appears to be a deathmatch arena for bad people that Gran’ma has captured. After T.C. and Jody discover that Cassidy is a vampire, and try to hang him up to burn to death at sunrise, Jesse bargains with them to put Cassidy in the Tombs, where he must fight to survive. It feels like a small mercy, but at least this should hopefully create an interesting new dimension to the Jesse/Cassidy conflict that has been ongoing all season so far, while also hopefully giving Cassidy more to do than lay in bed and bitch.

Speaking of Cassidy, he once again spent a good chunk of this episode in bed, as the Angelville crew becomes increasingly suspicious about his ability to quickly heal injuries. Jesse injures Cassidy some more to try to cover up his vampirism, though this is of course in vain, since T.C. eventually busts Cassidy when he’s feeding on a live chicken towards the end of the episode. Aside from this though, Cassidy did have a couple of decent scenes with both Jesse and Gran’ma, especially when he calls Jesse out for never directly admitting that Cassidy is his best friend. This would have been an uplifting moment, were it not for the fact that Cassidy soon after visits Gran’ma to beg for a spell that forces Tulip to fall in love with him. Cassidy may have been the best character of last season, but it’s cool to see the Preacher TV show finally start exploring some of the character’s extensive, reckless selfishness that defines him so much in the source comics. Cassidy is often very careless throughout the Vertigo printed panels, and this is no doubt going to create a big problem when Gran’ma wants to start putting the screws on Jesse and his crew. Now that Gran’ma is painfully aware of Cassidy’s affection for Tulip, you have to imagine that she’s going to find some way to exploit it later. 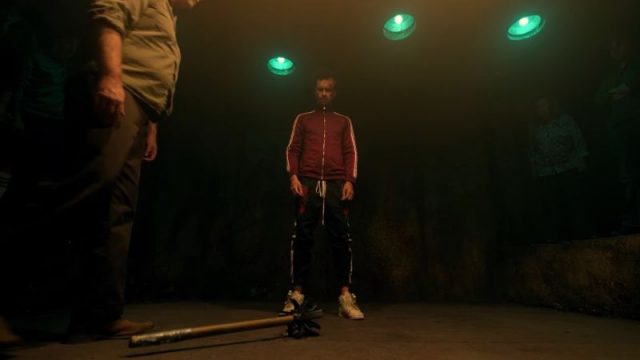 Finally, there’s an interesting hint that Gran’ma has some direct contacts in Hell itself, but this seems to be a story arc that’s being saved for another episode. Overall, “Gonna Hurt” made for a lot of talking and not much action, though that’s not necessarily a dealbreaker. It’s just too bad that Preacher didn’t make many meaningful strides forward this week, with Tulip quite clearly outpacing the other characters as she meets the enigmatic Madame Boyd for the first time. Tulip is rapidly looking like the best means to get out from under Gran’ma’s iron thumb, which is pretty ironic, since Gran’ma is the reason that Tulip cheated death in the first place. There might be something interesting that comes out of Jesse forcing Cassidy to fight in the Tombs next week, but for now, all we’re left with is more of the same plot elements for Jesse, and not much of note to do for Cassidy, and that’s frustrating. Considering that Preacher started off the season on such an exciting note, it deserves to gain some of that momentum back. Hopefully this slower week is an isolated incident.

Preacher 3.3: "Gonna Hurt" Review
Preacher heavily slowed down this week, perhaps a bit too much, as Jesse and Cassidy spent most of the episode wasting time, while only Tulip got anything done.
THE GOOD STUFF
THE NOT-SO-GOOD STUFF
2018-07-09
73%Overall Score
Reader Rating: (0 Votes)
0%