The CW’s DC Comics-inspired ‘Arrowverse’ television shows are yet still continuing to expand!

After May’s announcement by Arrow star, Stephen Amell that Batman Family character, Batwoman would be joining the Arrowverse for this Fall’s traditional crossover event between most of The CW’s DC-inspired shows, reports have now come in from various official news sources such as Deadline and Variety that The CW is working with its all-star DC TV and Riverdale producer, Greg Berlanti to develop a dedicated Batwoman television series. If picked up, the series is reportedly targeting a Fall 2019 premiere on the network. Currently, it’s unknown which actress will portray Batwoman for this proposed series, and the Arrowverse overall.

Caroline Dries, a veteran writer for former DC-inspired CW series, Smallville will write the proposed pilot for Batwoman, which will once again also be produced by Greg Berlanti. Berlanti already serves as a lead producer on all five of The CW’s current DC Universe-inspired shows, those being Arrow, The Flash, DC’s Legends of Tomorrow, Supergirl and Black Lightning, all of which are currently on Summer hiatus, and will resume with new seasons this Fall. Berlanti also directly developed all of these programs from the outset, except for Black Lightning, which was a DC series pitch originally set up at FOX that Berlanti merely produced, before FOX passed on the series, and it later landed on The CW for a successful launch.

There are few details on the proposed Batwoman series at this point, but considering that the character is joining the Arrowverse with this Fall’s traditional crossover between Arrow, The Flash, DC’s Legends of Tomorrow and Supergirl, she’ll obviously be connected to the bulk of The CW’s other DC shows in some capacity, save for Black Lightning, since it’s currently wholly separate from Arrowverse continuity. It’s currently unknown however whether Batwoman will unfold within the main Earth-1 universe, where Arrow, The Flash and DC’s Legends of Tomorrow all take place, or the Earth-38 universe of Supergirl. Supergirl has been established as unfolding in a parallel universe to the main ‘Arrowverse’, on account of CBS originally hosting the first mostly standalone season of Supergirl, before the show moved to The CW from its second season onward. Gotham City has been referenced, albeit never seen, on both of The CW’s main televised Earth’s, though interestingly, the existence of Bruce Wayne has only been directly confirmed on Earth-1 at this point, while a Batman Family only appears to definitely exist on Earth-38 for now. 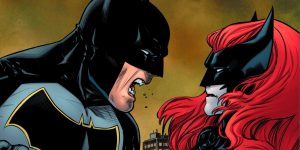 Batwoman originally debuted in the DC Comics Universe in 1956, as ‘Kathy Kane’, though the character was later rebooted for the more modern DC Comics universe as ‘Kate Kane’ in 2006, where she was re-envisioned as a high-profile lesbian superhero. Kate Kane’s homosexuality will remain intact in The CW’s planned TV series as well. Like Bruce Wayne/Batman, she is a wealthy heiress that puts her extensive wealth and resources into a crime-fighting career in Gotham City. Ironically, Batwoman’s original 1956 incarnation was also designed to be a heterosexual love interest for the much more well-known Batman, to combat growing controversy around Batman and Robin seemingly having an undercover gay relationship, as claimed by the 1954 book, Seduction of the Innocent. The modern Kate Kane however has served as a widely celebrated LGBT-inclusive superhero for the DC Universe, with The CW no doubt hoping to expand their own inclusivity efforts with Batwoman, after Black Lightning launched an African-American-led DC series on the network earlier this year, to strong ratings and acclaim.

Keep swooping to Eggplante for all major news and updates on Batwoman.