The Third Street Saints will be carving out some surprising new territory next year! After the series has remained more or less dormant in terms of mainline offerings since 2013’s Saints Row IV, it seems that Koch Media and Deep Silver, who inherited the Saints Row franchise rights from their now-defunct former publisher, THQ, are interested in bringing one of the series’ fan-favourite titles to an all-new platform. Among their announcements out of this year’s Gamescom, Deep Silver confirmed that Saints Row: The Third, arguably one of the most popular and successful entries produced by the Grand Theft Auto-lampooning sandbox game series, is officially headed to Nintendo Switch in 2019! This will mark the first time that a Saints Row game is being released for a Nintendo platform, if one doesn’t count the cancelled Nintendo 3DS spin-off effort, Saints Row: Drive-By. 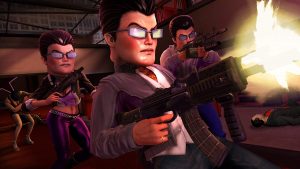 There’s no specific release window for the port beyond ‘2019’ at this time, nor are there any concrete details regarding potential enhancements and additions to the experience. It’s likely a safe bet however that the Nintendo Switch edition of Saints Row: The Third will feature some technical improvements, as well as all of the DLC that was eventually produced for the initial 2011 release of the game, along with the obvious Switch-specific incentive of being able to play the game on the go in Handheld Mode. Interestingly, there also don’t appear to be any current plans to remaster Saints Row: The Third for the competing PlayStation 4 or Xbox One, despite its successor title, Saints Row IV seeing a remaster on both current-gen consoles as ‘Saints Row IV: Re-Elected’ in 2015.

Saints Row: The Third originally released for PC, Xbox 360 and PlayStation 3 in 2011, and while it drew some controversy for its heavy volume of DLC, it was nonetheless praised as a series high point in terms of gameplay by many fans. The game ratcheted up the series’ tongue-in-cheek humour to new heights, as the Third Street Saints gang find themselves stranded in a new city, Steelport, which happens to be rife with new activities and opportunities to cause chaos. The game being brought to Nintendo Switch in lieu of the more recent Saints Row IV could also suggest an effort to re-ignite goodwill towards the Saints Row franchise after the middling reception and sales garnered by planned spiritual series successor, Agents of Mayhem last year, possibly indicating that developer, Volition may want to abandon the Agents of Mayhem brand in favour of a true return for Saints Row in the near future.