Preacher’s current third season has done a superb job of keeping the excitement going throughout its final handful of episodes. That pattern continued with aplomb in this week’s penultimate Season Three episode, “Schwanzkopf”, which, in many respects, feels like a highlight episode for the season, between its often hilarious writing, and squeamishly gory shock humour. Preacher’s current season seems to have more heavily focused on humour in general in its back half, but this particular episode feels like the perfect blend between humour and actual thrills, especially when several compelling story turns are laid out for next week’s season finale!

There was a lot going on in this episode, and nothing really seemed to be uninteresting or ineffective. Even from the get-go, all three of the show’s leads were in compelling positions, as Jesse is on the verge of losing Genesis to Humperdoo, Tulip lost her soul bounty to Sydney, and Cassidy had just discovered that Eccarius is murdering his turned followers. All of these story developments led to exciting new situations, with an especially cranked dose of insanity this week to boot! In the end though, it’s really hard to argue most of all with Jesse being about to lose his greatest power, even if it’s been inaccessible to him all season anyway.

As I said during my review of the previous episode, Humperdoo being the biggest new threat to Jesse was a very unexpected turn, since it originally seemed like the Allfather was just going to find some way to take Genesis directly out of Jesse and wield it himself somehow. Instead, Jesse had to think quickly and trick the Allfather into grabbing his gun, which apparently also allowed him to place the stunner on the Allfather in the process, which just so happened to be used after Jesse convinced the Allfather to untie him so he can die on his knees. What resulted was a hilariously wonderful sequence of events, as Jesse injects the Allfather with one of the failed celebrity compounds, sends Genesis straight into him, blows him up in a massive explosion of gore and viscera, and then has to struggle on the ground with Herr Starr, in all of the blood and guts no less, to try and reclaim the missing piece of his soul, before Herr Starr can use it against him!

Not only was the disgusting struggle between Jesse and Starr very funny and stomach-turning in equal measure, but it also made for legitimate suspense, as Jesse could finally reach out and rebuild his soul again. Jesse does manage to ingest the soul piece before Starr can get it too, in turn forcing Starr to his knees soon afterward. Jesse says that he has half a mind to force Starr to eat all of the Allfather’s exploded body parts (hell, if this was comic book Jesse we were talking about, he probably would have forced Starr to do just that!), but instead, he merely walks away… At least, after dressing the real Humperdoo up like his many, many, many clones! This way, Starr’s business at the Grail crumbles, while the real Humperdoo also becomes lost in a sea of clones that are now unleashed upon the world! It feels like a bit of a missed opportunity to not play up Humperdoo’s whims with Genesis as an extra comical threat to Jesse, but that’s ultimately a pretty minor nitpick, especially since I do understand that this probably would have put the writers into a pretty tight corner. 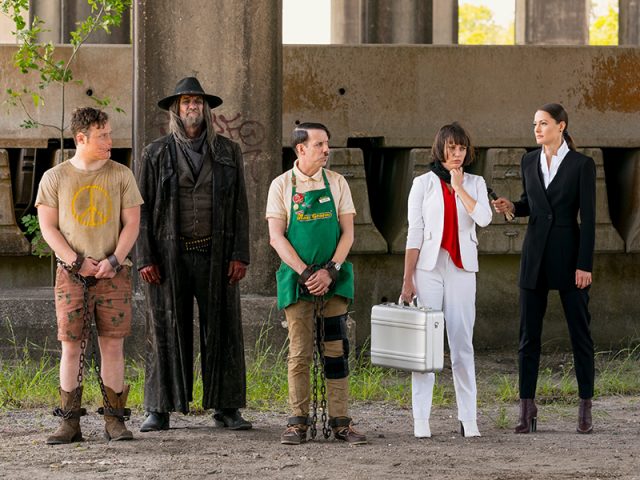 As fun, gross and humourous as Jesse’s story arc was though, we also got an equally strong storyline from Tulip, who is forced to re-confront Sydney to try and get the briefcase of souls back. Tulip almost succeeds at reclaiming the souls while also screwing over Featherstone yet again, but, in an extremely funny turn, Eugene bangs on the window of the bus to Hell, and outs Tulip’s real identity! This gets Tulip stuck on the bus while Featherstone goes free to drive off with Jody, and thus, Tulip is placed in a situation of having to try to escape the moving bus, while the Saint of Killers and Sydney supposedly keep a watchful eye. Adding to the laughs is Hitler impotently claiming that his SS allies somehow have an inexplicable plan to rescue him, something that Tulip and Eugene constantly dismiss.

Like Jesse’s main storyline, this plot with Tulip made for a fantastic blend of humour and legitimate excitement. The Saint and Sydney both not even lifting a finger while Tulip’s heist plans fail, knowing full well she’s carrying them out, was a great way to keep viewers in suspense while also undeniably amusing them. This sequence also provided an opportunity for Sydney to declare to the Saint that there are no rules in Hell now that God has left, leaving the Saint disillusioned with having to do work for Satan. The best twist of all however was when Hitler’s allies really did come through after a combination of tank fire, and Tulip’s own ingenuity, resulting in an amazingly over-the-top bus rolling sequence that has Tulip, Eugene and Hitler suddenly at the mercy of Hitler’s soldiers at the end of the episode. This seems as likely an escape route as any, but in trying to escape the Saint and Sydney, are the SS really going to be a better option? I guess that’s just another reveal to look forward to in next week’s season finale!

Cassidy’s storyline, in contrast to Jesse’s and Tulip’s, shouldered most of the drama of the episode, though even it managed a few solid chuckles, mostly due to Cassidy’s own innate cheeky charm. Cassidy’s confronting of Eccarius naturally doesn’t go very well, and after Eccarius tries and fails to appeal to Cassidy’s love for him, he quite literally nails Cassidy to the wall, and leaves him to burn to ash when the sun reaches him. Amazingly, Les Enfants du Sang completely ignore Cassidy’s claims about Eccarius being a killer as well, in an effective touch of continued tragedy for Cassidy’s increasingly put-upon character. This turn actually did lead to another of the episode’s best jokes however, when the seemingly passive, oblivious grandmother that owns the house Les Enfants du Sang hangs out in sweetly says to Cassidy that it’s, “Too bad he turned out to be such a hapless piece of shit.” I guess she was more aware of what the cult was doing in her basement than she initially let on! Either way, Cassidy won’t be getting any help from her, and it seems like he’s quite literally facing death as the episode winds down, likely being in the most dangerous position of all the leads going into the season finale next week. His ploy to get the grandmother to call the late Rachel does seem like an inspired way to hopefully bring down Eccarius’ cult once and for all though! 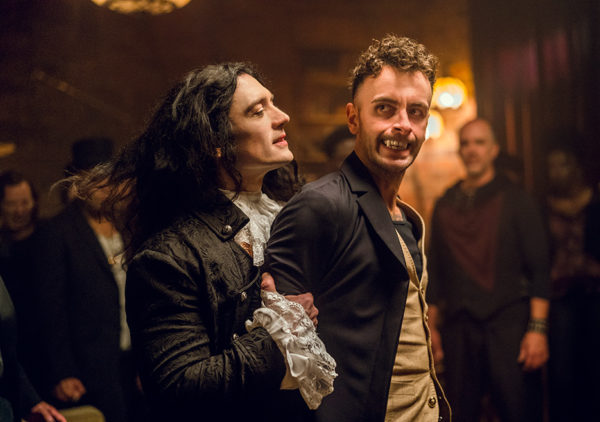 “Schwanzkopf” is a prime helping of Preacher that nails pretty much everything across its storylines. All of the episode’s story arcs got plenty of laughs, yet never at the expense of some real excitement. Everything was just over-the-top enough to be memorable without flying too far off-the-rails, and while AMC’s censors were still diligently making sure that the show didn’t break any of the network’s rules, it did feel like Preacher adhered much closer to the more openly unhinged style of its source comics in this particular episode, without so much evident holding back for television. Better still is that the show is in a prime position to deliver a comparably exceptional season finale next week, provided it can bring these ongoing storylines to an appropriately satisfying crescendo. There’s always a bit of a worry that particularly strong penultimate episodes could indicate a season blowing its metaphorical load too early, but I suppose this kind of craziness is also somewhat business as usual for Preacher, at least when it’s at its most engaged. All it needs to do now is carry the fun smoothly over the finish line!

Preacher 3.9: "Schwanzkopf" Review
Preacher hit an excellent high note for the current season this week, as Jesse works to reclaim the power of Genesis, and Tulip has to make a daring escape from Hell's clutches.
THE GOOD STUFF
THE NOT-SO-GOOD STUFF
2018-08-20
94%Overall Score
Reader Rating: (0 Votes)
0%