NOTE: Spoilers from throughout the third season of, “Preacher” are present in this review

Preacher’s extended Season Two episode order didn’t end up doing it many favours when that season ended up being so uneven. There were definitely good parts to Season Two last year of course, especially since the show could finally throw the shackles of Annville off of itself, and start amping up the potential irreverent craziness that has defined Vertigo’s Preacher graphic novels. After a more uneven attempt to do that in Season Two however, Season Three mercifully tightened the episode count back to ten, while also focusing on the innately twisted machinations of Jesse’s grandmother and her cronies in the voodoo-fueled Angelville. This entire season direction thus loosely follows the highlight story arc, “All in the Family” from the Preacher comic books, and despite the continued limitations of AMC’s censorship policies, the tighter, more focused and more consistently twisted third season of Preacher is easily the show’s best season to date in many respects!

As you can imagine, without having to bloat itself across an extended thirteen episodes, Season Three of Preacher fixed Season Two’s pacing issues immediately. The season hit the ground running with Jesse having to negotiate for Tulip’s life, making a deal with the metaphorical Devil, his own grandmother (who is actually one of the Devil’s business associates, as we later find out), to restore his girlfriend to the world of the living, which in turn places Jesse’s entire group under ‘Gran’ma’s’ thumb. This could have been a problematic direction for the season, since it effectively stops Jesse’s God-finding road trip cold for the year, and forces the show’s leads to sit around with their hands effectively tied behind their backs. Thanks to some very clever writing, some brilliant characterization for Angelville’s friends and foes, and some effective inclusions of God and Satan in all of the right places though, Preacher stayed entertaining and on-point, with every character getting plenty of moments to shine this season, despite the ever-growing cast of personalities to keep track of.

Split’s Betty Buckley was a major season highlight as Gran’ma, a cruel and wicked Angelville matriach, whom we learn is responsible for killing Jesse’s mother, and also indirectly responsible for killing Jesse’s father. The true murderer of Jesse’s father has remained something of a mystery on the show, even if we seemingly have an idea of why it happened by now, with Gran’ma’s crooked enforcer, Jody apparently being the one to deal the killing blow to Custer Sr. Jody, along with Gran’ma’s chemist and apparent lover, T.C., both made for menacing foils for Jesse, helping to fill in exactly how Jesse became so rough and complex throughout his formative years. This season dove deeper than ever into just how Jesse seemingly strayed from a moral path, and what compromises motivated him to do so, which in turn nicely ties into exactly why he’s chosen by Genesis later; Because he’s a perfect balance between absolute good and absolute evil.

This strong characterization of Jesse was especially important this season too, since right up until the end of the season, Jesse wasn’t able to use Genesis at all! With the Grail being in possession of the missing 1% of Jesse’s soul, Jesse couldn’t use the Word of God to control people, and this is a big part of the reason why he couldn’t just easily worm his way out from Gran’ma’s clutches, magic contracts be damned. As with many comic book-inspired shows, Preacher used this opportunity of de-powering the lead hero to explore their complex humanity, and what makes them a hero or anti-hero, even without their powers. It’s a chance to define them as something beyond their abilities, and that journey was especially fulfilling with Jesse this season, as we see him eventually outlast and overcome his malevolent ‘family’. Jesse even gives up his chance at absolution to deliver lethal justice to both Gran’ma and Jody in the end, along with making permanent enemies of the Grail in the process, who are now set up as especially dangerous and powerful antagonists for a potential Season Four that will hopefully be ordered for 2019 soon!

Speaking of the Grail, while they weren’t at the forefront of villainy this season, they did provide surprisingly effective doses of levity to offset all of the family drama. Herr Starr in particular remains one of this show’s best antagonists overall, and we once again get to see him in a new light, as we see Starr struggle against the demands of the morbidly obese Allfather, the Grail’s true boss. The Allfather has different plans for Jesse, and Starr is seemingly forced to go along with them, even as it seems apparent that the Allfather obviously won’t last to the end of the season. The Allfather as a character is one of Preacher’s most vile personalities yet, and his demise was well-earned, once Jesse regains the power of Genesis and uses it to quite literally blow the Allfather to pieces. This also handily wrapped up the ongoing plot arc of inbred messianic heir, Humperdoo, who has apparently been extensively cloned, with the clones now unleashed upon the world at large. This was another darkly humourous way to wrap up the failed ‘world-saving’ plan of the Grail, which will likely only further fuel Starr’s new quest for revenge against Jesse, if and when Preacher gets renewed for a fourth season.

Cassidy once again also proved to be a big highlight personality in Season Three as well, even if it took his story arc about half the season to get going. Cassidy did spend the first half of Season Three simply moping around in Angelville, with little to do beyond snap at Jesse, and that initially slow start for his character was a bit frustrating. This mercifully changed once Cassidy was able to get on a bus and escape back to New Orleans though, which lands him in the custody of a vampire cult, Les Enfants du Sang. The cult is run by Eccarius, another vampire (the only other vampire besides Cassidy in the Preacher comics, in fact!), who ends up beginning a homosexual relationship with Cassidy, only for Cassidy to later find out that Eccarius is murdering his followers after turning them. This was another great bit of tragedy for Cassidy’s character, especially since the story arcs of the cult also allowed the show to explore Cassidy’s cowardice and selfishness, and where his lines really stand as an anti-hero in his own right. Hoover even found a particularly great use in this story arc to boot, taking it upon himself to eliminate the vampires, only to get turned into one him himself. The vampiric Hoover does end up being killed at the end of the season, in a doubly major departure from the source comics, but at least he went out on his finest story arc, and frankly, I don’t think Herr Starr or Featherstone really need his character anymore. Featherstone by herself has always been the most effective comic relief when it comes to Starr’s character, at least in my opinion.

Aside from Angelville and the Grail, the show’s divine element also got lots of all-new development in Season Three, with both God and Satan really coming into their own as personalities in their own right this season. Satan ends up being killed by the Saint of Killers as the season wraps up, but his portrayal as a frat boy-ish corporate douche felt right at home with the series’ tone, and the same was true of God being portrayed as an irresponsible tyrant who is simply on Earth to dick around. The divine elements of the show thankfully weren’t over-used, and often contributed to more standout humour, even if the escaped Eugene and Hitler didn’t end up factoring into much of the season, particularly since they didn’t appear at all in the first half. When all is said and done, Hitler taking over Hell, the Saint of Killers breaking away to once again hunt down Jesse, and Tulip rejecting her own chance at absolution to stick it to God, tease yet more very promising new story developments for a potential fourth season. Eugene following the Saint of Killers even sets up his inevitable transformation into the vigilante, Arseface, his identity from the Preacher comics, which feels a bit overdue by this point, especially since Eugene’s character is one of the few personalities that Preacher seems to consistently struggle with making properly engaging for the most part. Eugene’s goody two-shoes act just no longer fits within the growing insanity of Preacher’s TV universe, so hopefully we see him embrace a full-blown transformation into Arseface next season. 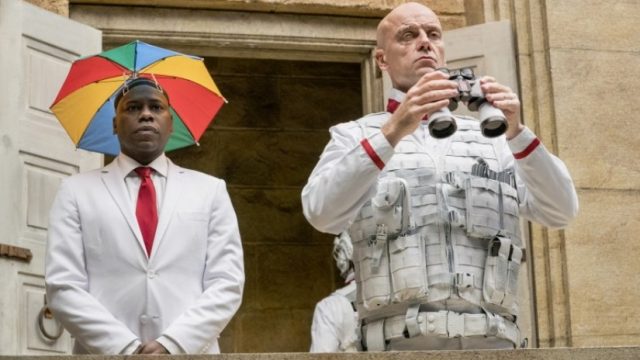 It’s fair to say that Preacher’s third season gets stronger in the second half, since some of the first half has to justify bumbling around without clear direction in Angelville, working against characters that are quickly killed off in favour of other, better story arcs. Beyond some of the slower moments in the first half of the season though, it’s also true that the season’s outstanding payoffs are well worth the wait, especially since the final result of the season’s storylines leaves Preacher in an especially strong position for a potential fourth season next year. All three of the lead personalities had to confront and overcome what drives their inner darkness to great effect this season, and seeing antagonists like the Saint of Killers and Herr Starr become more dangerous than ever over the course of the season was equally satisfying. The show spent just enough time on Jesse’s family history without overdoing it as well, leading to an interesting new style of villain conflict that seemed to work very well for the show, even with the lead characters forced to stay in Angelville for a season (Cassidy’s branching off aside), and even with Jesse being unable to command Genesis until the season’s climax. The morality is getting muddier, the forces of all sides are only growing more powerful, and Preacher’s entertainment value is increasing all the while. The growing pains of this show’s sophomore slump are officially gone, and I feel like things can only get better from here. Bring on Season Four, AMC!