Better Call Saul seems to be continuing in the direction that it established last week, namely sidelining the show’s criminal element in favour of heightened focus on Jimmy and Kim especially. This means that Nacho remains absent from the series for now, as we instead get more teases of a key Breaking Bad development between Mike and Gus, and not much else from the criminals’ end. “Pinata” still however delivered another standout core storyline for Jimmy, one that’s also nicely complemented by Kim getting a major new career opportunity, even if it feels like yet another beneficial turn that probably won’t pan out by the time the events of Breaking Bad begin.

One particularly exciting, albeit disappointingly fleeting element of this episode once again unfolds during its cold open as well, when we get a brief return by Michael McKean as the late Chuck McGill! Last week’s Better Call Saul episode had a cold open that flashed to the show’s future (i.e. Breaking Bad time), but this time, we get a glimpse of the past, as we see Jimmy during his days in the mail room, and Kim, who is still an intern at the time, already on the rise as a promising negotiator and attorney. The show definitely could have done more with Chuck here, since we barely get any lines from McKean before he’s once again hurried out of the episode, but seeing Jimmy sneak off to the library after hearing about Chuck’s unprecedented legal success made for a strong reminder of the hard-working principles that Jimmy is now starting to lose, particularly with Chuck no longer around to keep him shooting for more, even if it is through constant dismissal and patronizing. 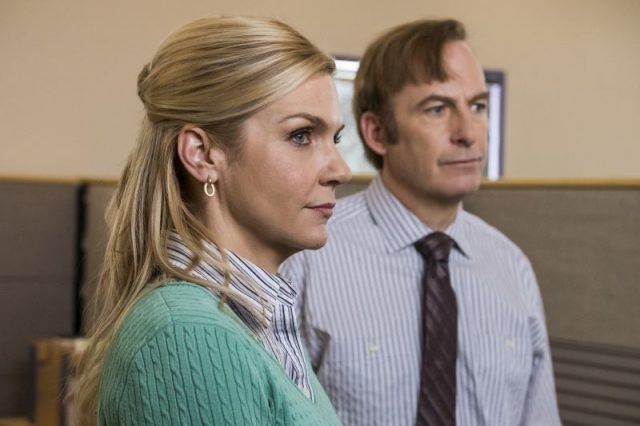 We got another effective callback to the past soon afterward as well, as Jimmy continues to waste away at the cellphone store, only to receive a call that Mrs. Strauss, the nice old lady from his Sandpiper Crossing case (from way back in Season One!), has passed away. Since Jimmy was in charge of Mrs. Strauss’s will, he has no choice but to admit that he doesn’t practice elder law anymore, and instead refers the inquiring relative to HHM. The show is very adeptly bringing us back to Jimmy’s better days here, as we start to see yet more growing darkness infect his character. Jimmy clearly cared for Mrs. Strauss and her estate, and seeing him helpless to be there for Mrs. Strauss’s relatives, despite his former promises, was beautifully conveyed in a passing, but tender moment at the cellphone store.

This moment was also made all the better when Jimmy pays a visit to HHM proper, which is shown in disarray and on a downturn, with Howard still a mess in the wake of Chuck’s death. Seeing Howard seemingly pathetic and beaten only seems to add to the tragedy of Jimmy’s helplessness with Mrs. Strauss, since Jimmy had to refer the relative of a much-loved client to a comparably ineffectual firm that seems to be falling apart under Howard’s watch. This leads to Jimmy yet again calling out Howard (boy, most of Howard’s entire role this season seems to be just getting chewed out, isn’t it?), which Howard in turn responds to with a very curt, blunt, “Fuck you, Jimmy!”, once again finding some strong use for that precious rare AMC f-bomb. Again though, we see through this attempt to re-inspire Howard that Jimmy hasn’t yet completely fallen. Even if he doesn’t necessarily care about Howard, Jimmy does care about his clients, and seeing Howard fall down on the job is something that Jimmy rightfully doesn’t want associated with his good name, even if, as Breaking Bad fans know, the name, “Jimmy McGill” is not a name that will live much longer.

Kim, by contrast, seems to still be moving up in the world, as she gets an amazing new opportunity with Rick at Werner Ziegler, which would solve her issues with Mesa Verde, and allow her to do the real legal work that she’s always dreamed of. This comes at bad timing however, since Jimmy is starting to daydream about restarting Wexler-McGill once his suspension is up, only to have Kim’s newfound success seemingly dash his hopes. After a moment of weakness though, Jimmy does approve of Kim’s decision, once again trying to do right by the people he cares about, even as his principles continue to erode. That sobering reminder was set up and executed brilliantly as well, after an episode where we often see the best of Jimmy again, only to have things end with Jimmy tracking down the teenagers that mugged and beat him during last week’s episode, and subsequently getting them captured and threatened in a pinata store, left to hang upside-down in the closing seconds as Jimmy aggressively declares that he is off-limits as a target. Jimmy’s still trying to be a good man, but he certainly made it very clear to these boys that he’s done being let down and shit on. Unlike Howard, Jimmy is clinging to whatever paltry enterprise he has left, which seems noble, but also interestingly begs the question of whether Jimmy’s pride is truly the greatest source of his undoing in the end.

With the welcome heightened focus on Jimmy that now seems to be occurring, after the criminal element quite clearly overshadowed him early in the season, Gus and Mike didn’t make much forward movement this week, once again. Their subplot continued to tease the imminent construction of the laundry lab, with most of the criminal subplot being driven by Mike, as he shows the German engineers around a surprisingly robust, inviting living space. Gus is still keeping tabs on the engineers, and one is quite clearly declared to be, “Trouble”, but for now, the show’s criminal storyline seems to have continued to slow down considerably for the time being. That’s fine though, since there’s no doubt a big buildup being prepared for a major criminal turn over the next few weeks, since we’re now into the latter half of Better Call Saul’s fourth season. Things may be slow for the bad guys right now, but the Breaking Bad teases are still a lot of fun, particularly when we see Gus seemingly taunt the comatose Hector at the hospital, talking about a wild animal stealing from a childhood fruit tree that he forced into captivity. Gus really is the ultimate criminal for this universe, and it feels like his presence alone is often enough to make the criminal storylines intriguing, even when not much seems to be happening in them, at least for now.

“Pinata” continued to double down on the show’s Jimmy focus, and that’s a good thing, since Jimmy’s character finally feels like the star of his own show again. It does feel like Jimmy and the criminals have somewhat traded places at this point, since Gus’s operation continues to move at a very sluggish pace for the time being, and Nacho hasn’t even shown up at all over the past couple of weeks, but for Better Call Saul, it follows that Jimmy should be the most consistently engaging character. To that end, seeing more reminders of Jimmy’s better days, and how they eventually came together into a shocking display of intimidation and criminal dominance, made for masterfully crafted dramatic storytelling this week, as did the unfortunate timing of Kim’s major new career opportunity. Kim is still bouncing around quite a bit in terms of where her drama is coming from, but the foreshadowing of her own probable downfall will also easily keep viewers hooked, since, like Jimmy, she’s starting to spin several plates, and any one of them could be the instrument of her likely downfall. With Jimmy’s own refusal to quit once again more blatantly standing against his supposed best self though, perhaps the more shocking turn would be Kim somehow escaping tragedy by merely escaping Jimmy’s orbit of her own volition. That said however, that speculation could also be rooted in the fact that I just don’t want to see another good person fail so spectacularly in this universe.

Better Call Saul 4.6: "Pinata" Review
Better Call Saul continues to double down on its heavy Jimmy focus this week, providing a well-paced callback to the past, before bringing everything together in the dark, sobering present.
THE GOOD STUFF
THE NOT-SO-GOOD STUFF
2018-09-11
88%Overall Score
Reader Rating: (0 Votes)
0%