After such a busy and exciting season premiere last week, The Gifted slowed down quite noticeably this week, taking a breather to focus more on character drama, and the ever-growing divide between the forces of the Mutant Underground and the Inner Circle. “unMoored” didn’t have any action, nor did it have much forward movement on any central conflicts. It did however zero in on some interesting personal conflicts for various characters, even if several personalities felt quite noticeably shoved into the background.

I get that there’s a lot to unpack after how explosively the sophomore season of The Gifted started last week, but it is starting to feeling like certain characters are going to take dramatic precedence in the early portions of the season, specifically John, Lorna, Marcos and the Strucker family. The episode also slightly shifted focus away from Lauren this week, in favour of an increased spotlight on Andy, who is struggling with his training for the Inner Circle’s upcoming operations. As much as Lauren is being tormented by the separation from her brother, it feels like the source of her pain comes more from how Andy’s defection has shattered the Strucker family. Andy, meanwhile, seems to have a different set of problems, simply doubting his decisions from a more singular stance, despite the seemingly supernatural forces that seem to be poised to push him back to his family, or at the very least, his sister. 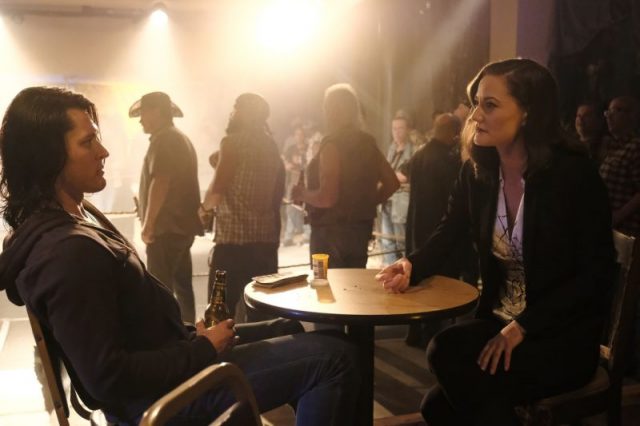 Andy’s struggles made for some of the better story moments in this episode, particularly when he sneaks off and almost calls his family, though doesn’t follow through, despite Fade still catching him in the act. This leads to Andy almost being killed by Reeva, before he tells the truth about what he did, though this is the point where the show got greedy with his story arc, and especially with Reeva’s arc this week. Reeva needs to be reined in a bit in general, actually, because she’s starting to come off as too much of a cartoon villain, which is threatening to deflate the very promising conflict between the two major factions of the show at this point. Reeva forcing the Frost Sisters to kill all of the people that they coerced into silence last week feels unnecessary and overly conspicuous (Esme even indicates that this is a pointless action that will cause unwanted attention, making it even more puzzling), especially when the Frost Sisters should theoretically be able to just make all of these people forget about them, being mighty telepaths and all! The season premiere did such a great job of highlighting how neither side is clear-cut right or wrong, but now that Reeva is stupidly dropping innocent bodies and no doubt drawing public attention to the Inner Circle as a result, it’s quickly creating the impression that, no, the Inner Circle are definitely the bad guys, and the Mutant Underground are definitely the good guys.

What salvaged the dumbing-down of the show’s politics this week however was John’s story arc and its focus on the emotional fallout of the war for mutant freedom, which was perhaps the best storyline of this episode. John decides to pay a visit to Evangeline, the mutant lawyer that visited Lorna in prison last season, seeking answers about how to get closer to the Inner Circle. Apparently, John and Evangeline have a complicated history, since Evangeline rescued John from a lowly existence abusing his mutant powers in fight clubs, before getting him clean off of drugs, which led to John’s loose connection with the now-vanished X-Men. Despite that though, Evangeline mostly refuses to help, saying that the Hellfire Club’s resources are far too vast, and John’s friends are gone for good. Most brutally of all however, Evangeline blames John for the deaths that occurred in Atlanta, which has John facing his own pain and grief, and trying to keep that a secret from Clarice as well. John did lose more than most last season, between both Pulse and Dreamer, and taking the guilt of Atlanta on his own shoulders led to a particularly sharp dramatic performance from Blair Redford this week. Clarice conveniently sitting out most of this episode also somewhat suggests that this grief is going to eventually strain John’s and Clarice’s relationship later to boot. 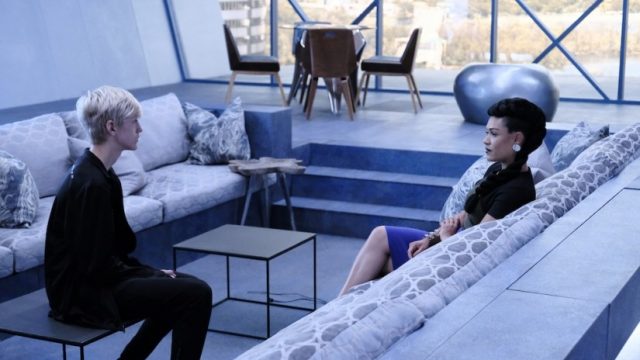 Marcos also got an especially strong story arc this week, as he continues to lament his separation from Lorna, and the fact that he wasn’t there for the birth of his child. Marcos saving a bottle of wine, and eventually sharing it with Caitlin, was a very nicely subdued way to continue hammering home that the Mutant Underground’s remaining group is losing faith in ever being able to come together again. The callback to Marcos’ glass-lighting powers at the end of the episode was very sweet though, and seems to set up a central story arc for next week’s episode, as Dawn starts burning up with fever in the episode’s final seconds, with Lorna screaming for help as the episode ends with a smash cut to credits. It looks like Marcos giving away his location is going to lead the Inner Circle straight to him, and he’ll no doubt be trusted to try and help the baby. Does this mean that the Mutant Underground and the Inner Circle will stop playing cat-and-mouse soon, and start properly confronting each other?

Of course, we also got plenty of drama with the rest of the Strucker family aside from Andy, even if they mostly served to assist with the other mutant story arcs this week. There was at least one exceptional dramatic scene shared between Lauren and Reed towards the end of the episode however, after Lauren finally calls out her father on lying about his incessant fighting with Caitlin, and refusal to abandon the idea that Andy was taken against his will. This was also well-timed with the surprising revelation at the Inner Circle that Caitlin has been contacting Andy for months through popular computer game, League of Legends, constantly alerting him to the whereabouts of the Mutant Underground. Well, so much for Marcos’ hand displays being a danger to the group, since it seems like Caitlin has been leaking information all along! I really doubt that the Mutant Underground is going to take that lightly, once the truth comes out!

Finally, after we didn’t see him at all last week, Jace Turner actually returned in this week’s episode, in his post-Sentinel Services life. Turner is trying to work as a security consultant somewhere else, and for the most part, his life seems to have returned to a very mutant-free normal. Despite that however, Turner’s curiosity has been provoked by the Washington blackout (which did make the news, apparently, as it should have!), despite his old colleagues telling him to let it go. Eventually, Turner does indeed seem to throw out his old Sentinel Services files as well, apologizing to his wife for his prolonged obsession with finding justice for his daughter, and that seems to be the end of it… But obviously, with Coby Bell still being a series lead at this point, I doubt that this is truly the last time that Turner will have the Mutant Underground on his mind. The show is re-establishing Turner in Season Two for a reason, and I imagine that a big part of that will come into play once either the Mutant Underground or the Inner Circle turns their eye towards the resources of Sentinel Services in the coming battle!

“unMoored” had to spread itself pretty thin in order to start laying more groundwork for future dramatic developments this season, and some characters were inevitably lost in the shuffle, while other key bits of information (such as Caitlin blabbing the Mutant Underground hideouts to Andy), had to be quickly indicated in passing, without the proper time to be explored. The characters that were spotlighted did have plenty of strong scenes though, with a fairly interesting re-introduction of Turner to boot. Reeva’s character is starting to suffer a bit, simply because she’s not effectively justifying her out-of-control bloodlust at this point, but hopefully that’s rectified as her personal history and motivations continue to be explored. Reed’s powers are also continuing to come back out amidst all of this angst, and as we see him disintegrate metal cabinets and brick walls with a mere touch, it seems apparent that Reed is a very powerful mutant! Once his abilities inevitably manifest again, is that going to create another target for the Inner Circle’s machinations?

The Gifted 2.2: "unMoored" Review
The Gifted slowed right down to spotlight a few key characters this week, as John must face his demons, and Andy starts to question his future with the Inner Circle.
THE GOOD STUFF
THE NOT-SO-GOOD STUFF
2018-10-03
76%Overall Score
Reader Rating: (0 Votes)
0%