The Flash is starting its fifth season on an uphill climb, after the fourth season sputtered into such a disappointing, unfulfilling conclusion. Things did at least end with a decent cliffhanger however, as Nora, the future daughter of Barry and Iris, reveals herself to the present-day Team Flash, claiming that she made a major mistake. Nora’s being allegedly ‘stuck’ in the present thus serves as the main story arc of The Flash’s fifth season premiere, aptly-titled, “Nora”, as Barry and Iris try to untangle the reality that they’re interacting with their future speedster child, who now seems to be meddling with the timeline herself.

“Nora” thankfully avoids re-treading the fallout of Flashpoint, even if Barry’s unintended consequences from saving his mother in the past are mentioned, and one of the better elements of this season premiere is that it manages to give Nora her own unique story arc as a speedster, without frequently rehashing what came before. Nora is essentially set up as an amalgam of several future-era DC heroines, taking some of the backstory from Dawn Allen, Barry’s and Iris’ daughter from DC Comics lore, and combining them with future Legion of Super-Heroes Flash successor, XS, namely since ‘XS’ is the mantle that Nora eventually takes up as the new speedster protector of Central City in the future. The Legion of Super-Heroes aren’t mentioned, since they appear to be restricted to the world of Supergirl at this point (this makes sense, since Superman and Supergirl seemingly don’t exist on this Earth, and thus wouldn’t inspire the Legion to form), but it is kind of cool to see a different sort of spin on the legacy that The Flash will eventually leave behind.

This was another element of the season premiere that worked very well, in fact. Nora’s motormouth sometimes lets slip certain facts about the future, which either leads to some very promising teases for this show’s upcoming episodes (a fight between Gorilla Grodd and King Shark?!), hints of tying in Flash’s future in DC Comics lore with the Arrowverse (confirmation of the Flash Museum existing in the Arrowverse’s future), and an ominous hint of what’s to come for Barry when this show starts approaching its final episodes, however far into the future that ultimately is (presumably, there’s a ten-season plan for The Flash, and if The CW can’t stretch the series that far, they’ll just utilize a time jump to 2024 for the final season). Eventually, Nora indicating that she was born shortly before Barry disappeared in 2024, along with confirming that Barry never returns to Central City in the future (this does open a bit of a plot hole on Legends of Tomorrow however, considering that a 48-year-old Barry leaves a message about Flashpoint and Thawne to Rip Hunter), casts an effective dark cloud over the show, similar to Season Three, when Team Flash was struggling against Iris’ seemingly inevitable demise at the hands of Savitar.

Still, it’s not all doom and gloom, as Nora makes herself at home in 2018, with, “Reverse-Tachyon” particles in her body being blamed for her inability to re-enter the Speed Force and return to her own time. This allows her to connect with Iris in the past, while Barry starts agonizing over the implications of allowing his future daughter to stay in the present. Meanwhile, Ralph resumes his place in Team Flash, offering a pretty humourous running gag of trying to figure out time and the multiverse, hilariously deducing metaphysical science that the show already touched on at length during previous seasons, much to the annoyance of the team. The episode’s biggest laugh even comes when Ralph points out the very real plot hole regarding why Eddie had to kill himself to erase Thawne from existence at the end of Season One, when he could have just gotten a vasectomy and achieved the same result, while still being alive (kind of makes Eddie look like an idiot during his big, emotional sacrifice, doesn’t it? Especially when Barry brought Thawne back soon afterward anyway!). The humour with Cisco, who is also struggling with his potential future, and Ralph, who isn’t even up to speed on the show’s present, nicely offsets all of the big questions that surround Nora being in the present, and they also nicely distract from the somewhat lame twist that Nora merely stole a Reverse-Tachyon device from the Flash Museum in the future, so that Barry would be unable to instantly return her to her own time. Really? That’s it? Nora just wanted to go back in time to meet her father, with her, “Big mistake” simply saving his life and preserving her own existence? That kind of deflates the big cliffhanger from last season then, and that’s not something that Season Five of The Flash can really afford to do.

Speaking of not being able to afford something, even five seasons in, The Flash is still failing to make the most out of many of its metahuman villains-of-the-week. The season premiere pits Barry against Gridlock, another Prime Earth nobody from DC Comics lore, and a metahuman who can harness and discharge kinetic energy. After Nora meddles in the battle that was supposed to be, “One-and-done” however, Gridlock becomes super-powerful off of The Flash’s energy, making him a menace that seemingly can’t be stopped. The show also explains that the effort to stop The Enlightenment also left S.T.A.R. Labs without a satellite, which means that it’s now much more difficult to track metahuman criminals in Central City, allowing Gridlock to run wild for a good span of time. Hopefully this is something that the show remembers going forward, since it might actually make for interesting new threats that could allow Barry to start flexing his capabilities as a CSI again, rather than immediately being able to pounce on anyone that shows up in the city at a moment’s notice, as he’s been able to do for the past couple of seasons especially.

For now though, Gridlock just ends up becoming another highly disposable metahuman threat that is only in it for cheap robberies. There is a fairly decent climax at least, with Barry, Wally and Nora all having to be vibed up to a commercial plane that Gridlock is trying to crash, despite Nora not yet knowing how to phase matter. Barry has to teach Nora to phase on the fly with him and Wally, and while it’s still a bit too convenient that a superpower glitch can be routinely solved with a simple pep talk on this show (Supergirl seems to pull this sometimes as well), Barry, Wally and Nora phasing the plane through buildings and getting it to land in the river still makes for a pretty cool sequence, by television standards anyway. It also serves as a pretty cool excuse to bust out the Flash Ring, which eventually carries a spare costume for Barry in DC Comics lore (apparently, it was also invented by Ryan Choi in the Arrowverse, with Choi eventually succeeding Ray Palmer as The Atom in DC Comics lore. Hmmm…), while also allowing Barry to enjoy some slick new threads for Season Five. I’m not complaining! 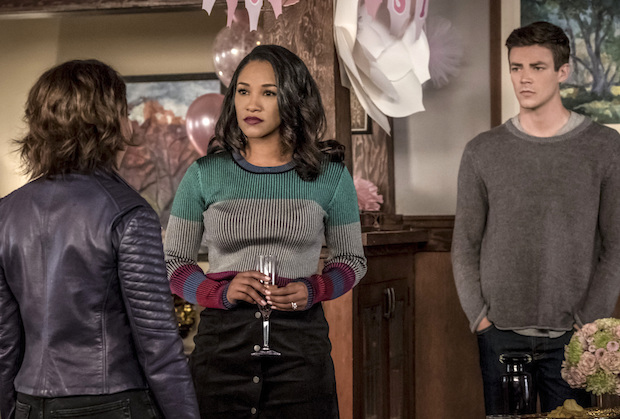 Things then conclude with the show contriving some half-baked excuses to have Wally rush off and find himself again (this will presumably lead into why Wally is no longer with the Legends on this season of Legends of Tomorrow too), while Nora is finally allowed to just hang out in the present, due to Wally actually using his time with the Legends to justify proof that, “Soft events”, like Gridlock being defeated later, don’t have an adverse effect on history, while, “Fixed events”, like the death of Barry’s mother, will have a devastating impact on time if they’re altered. Whatever. Wally’s gone, Nora’s here, and we get a foreshadowing of the season’s big bad, Cicada in the final moments of the episode, when he goes to kill Gridlock for unknown reasons. This all leads to “Nora” feeling like a fairly competent fifth season premiere for The Flash, but one that also doesn’t soar either. The Flash still has quite a bit of work to do before it can hit the incredible high points of its first couple of seasons again, but there’s enough good teases for fans to stay invested. I just hope that the mystery of Nora can eventually find somewhere more interesting to go, if we’re presumably stuck with her all season.

The Flash 5.1: "Nora" Review
The Flash manages to start its fifth season on a mostly solid note this week, as Barry's and Iris' future daughter settles into the present, and unintentionally causes some trouble.
THE GOOD STUFF
THE NOT-SO-GOOD STUFF
2018-10-10
77%Overall Score
Reader Rating: (0 Votes)
0%