NOTE: Full spoilers for this episode of, “Better Call Saul”, including a major character death, are present in this review

Better Call Saul has been delivering one of its strongest and most consistently engaging seasons to date this year, and with everything set to come to a head for just about all of the lead personalities, we had quite the exciting season finale to look forward to this week! “Winner” definitely lives up to its name as another highlight episode for the season, featuring Jimmy confronting the legacy of Chuck once and for all with Kim at his side, and Mike solving the problem of the runaway Werner in a very difficult manner.

The episode begins with another welcome guest appearance by Michael McKean, as we see Jimmy first get his law license many years ago, with Chuck vouching for his character. After Jimmy and Kim decide to celebrate at a karaoke bar, Chuck also comes along, but mostly sits by himself. Jimmy eventually convinces Chuck to sing and have fun with him though, before the scene cuts to the two men drunkenly stumbling into Jimmy’s apartment and preparing to sleep it off, singing ABBA into the night. It’s a legitimately beautiful, surprisingly optimistic opener, even if it is unfolding from the perspective of a time long past. Once, very long ago, Chuck really did openly profess his love for his brother, and the two really did seem close in their own way. This flashback to happier times is extra appropriate too, considering that so much of Jimmy’s arc in this season finale ties heavily into Chuck’s impact on Jimmy, both as a person and as a lawyer. 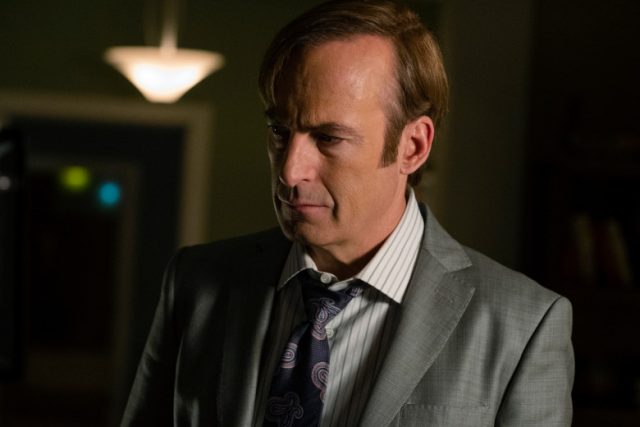 Surprisingly, Jimmy seemingly ended up getting less focus in this climactic episode, despite that, with most of the focus being on Mike and the hunt for Werner, but Jimmy’s story arc still hit all of the right notes in terms of anticipation, tension and payoff. Jimmy plans to read Chuck’s letter at his appeal, in a last-ditch bid to appear genuine and appreciative of his brother, after a series of goodwill ploys like meeting people at Chuck’s grave and donating money for a reading room in Chuck’s name. While this strategy initially appears to go as planned, with Kim backing the play, Jimmy instead ends up putting the letter away during the appeal, breaking into his own improvised speech about how he’ll never be as good as Chuck. It’s actually a genuine tear-jerking moment, not just for the characters, but for the audience. We appear to see Jimmy finally come to terms with the crushing defeat of knowing that he’ll never be seen as Chuck’s equal, and that all he can do is simply try to be the best man he can be. It’s actually a genuinely heartbreaking moment of clarity and maturity on Jimmy’s part, and it really is impossible not to feel for him during this moment.

… And thus, we, the viewers were also brilliantly played. Jimmy and Kim later celebrate Jimmy’s great moment on the way out, only for Jimmy to declare that the emotion was faked, and he relished the tearful reactions of the judges. Kim simply stares in disbelief as Jimmy is taken away to sign the paperwork confirming his return to the bar association soon afterward, proudly declaring that he won’t be practicing law under the name, “McGill.” Yes, for Breaking Bad fans, the moment of truth has finally arrived. While Jimmy simply turns back to Kim to declare, “It’s all good, man” as the episode ends, it’s impossible to misinterpret the name he’s going to form for himself as a newly-re-minted lawyer. This appears to be the point wherein Jimmy is finally fully casting aside his family name, and re-inventing himself as Saul Goodman, the ‘criminal lawyer’ of Breaking Bad fame. Does this mean that next year’s fifth season will be Better Call Saul’s last, now that Jimmy has finally found his way to his true destiny? I guess that’s for 2019 to decide.

Regarding Mike’s storyline, which seems to take up the majority of the episode, most of it merely seems to detail the process of tracking down Werner after he escapes the lab construction compound. We do however get the added dimension of Lalo also hunting for Werner, after initially attempting to follow Mike, only to get ditched after a surprisingly clever gum ploy. It makes sense when you see it. The criminal storyline centering on a chase makes for some good excitement, especially when Jimmy’s storyline really only gives him one believable path to follow for the end of the season, considering that he’s back practicing law again during the events of Breaking Bad. It was obvious he would win his appeal, but it was less obvious whether Mike would ultimately find a way to track down Werner and secure his safety before Gus or Lalo could get to him.

Alas, that’s not how this universe tends to operate. While Mike does manage to eventually find Werner, before Lalo can extract valuable intel about Gus’ operation from him, Mike is unable to talk Gus down from executing Werner, on account of his being a safety risk. Mike does manage to coerce Werner into getting his wife to safety, narrowly avoiding the watchful eye of Gus’ men off-screen, but Werner nonetheless resigns himself to his fate, walking along the stars for a bit, before Mike shoots him dead, opting to do the job himself in a quick and humane fashion. Just as Jimmy seemed like he was inevitably going to find his way to his Saul Goodman identity by the end of this season, it seemed equally inevitable that Werner’s escape would end in tragedy for Mike, regardless of whether or not Werner ultimately survived being found. Mike having to put down a friend is something that will probably affect him into next season as well, at the very least. This questioning of Gus’ methods by Mike is also implied during a closing scene, wherein Gus shows Gale the nearly-constructed superlab, only to have Gale bump into a dejected Mike on the way out, who is looking over the lab that he oversaw Werner build. Mike has always been a fascinatingly complex character, even by the standards of this universe, and seeing the tragic events with Werner in this episode helps to further piece together why Mike doesn’t tend to buddy up to anyone during the events of Breaking Bad in particular.

“Winner” made for an appropriately superb closer for an overall superb fourth season of Better Call Saul, bringing us to satisfying conclusions all around, for the most part. The only obvious head-scratcher in the episode is where the hell Nacho ended up. Once again, Nacho is weirdly absent in this episode, with his story arc inexplicably left dangling until Season Five begins next year. Perhaps there was just nowhere else for Nacho to go during the rest of this season, but his absence is nonetheless conspicuous, once again. Still, the show is more or less setting the stage for the criminal network of Breaking Bad in the lead-in to next season, once again begging the question of whether Better Call Saul will end after next season, giving it the exact same season count as Breaking Bad in the end. Perhaps there’s still more story to tell beyond next year, even with Gus nearly getting his completed superlab, and Jimmy finally becoming the shady legal presence that he was meant to be, but I’d be equally satisfied with the desire for Better Call Saul to follow in the footsteps of Breaking Bad, namely by not overstaying its welcome, and being sure to go out on a high note!