The Gifted picked up a bit more momentum in this week’s episode, “coMplications”, particularly with Lorna’s and Marcos’ baby suffering from unexpected medical complications. That wasn’t the only big draw in this episode either, since we also finally got introduced to this universe’s version of the Morlocks, the sewer-dwelling mutant society from Marvel Comics lore, which appear to be setting up Clarice for an interesting new role with the Mutant Underground this season. This is all topped off with more Strucker family-specific struggles as well, as the truth finally comes out about Reed’s manifesting mutant abilities.

The truth about Reed doesn’t come out in a delicate way either! While Reed and Lauren are driving to a supply spot together, Reed becomes stressed while talking to Lauren, and this leads to the car’s steering wheel disintegrating in his hands! After crashing into a nearby van, Reed and Lauren are forced to hoof it before they’re discovered (narrowly avoiding the nosy gaze of Turner too!), stealing another vehicle, and this time having Lauren drive. This made for a great mix of tension and character development, particularly as we learn a bit about the shocking circumstances under which Lauren’s powers manifested, and why she never came clean about them to Reed or anyone else in the family. The trauma of the incident is also enough to get Reed to tell Caitlin about his hidden abilities, which she was suspicious about anyway, after discovering the damage left during Reed’s last mutant flare-up. We won’t really see the fallout of this until next week, but it was good to see that The Gifted is still keeping the Strucker family drama strong, even with Andy defecting to the Inner Circle.

Speaking of the Inner Circle, there was plenty of excitement there as well, as the doctor tells Lorna that the only way to save Dawn is to enlist the help of Marcos, since Dawn is suffering from an acute, highly stubborn form of jaundice. This leads to the Frost Sisters taking Marcos to the Inner Circle’s facility, where he finally gets to meet his infant daughter. This was a genuinely beautiful moment, especially after the episode begins with a cold open flashback, wherein we see Marcos confronting his mutant-hating father on his deathbed. Marcos obviously isn’t allowed to stay with the baby, but is determined to avoid becoming his father, even going so far as to break free from the Frost Sisters’ telepathic hold when they try to force him to leave! Reeva nonetheless quickly subdues and ejects Marcos (just how strong a mutant is Reeva?!), and he’s left to stumble into John’s and Clarice’s apartment, declaring that he wants to hit the Inner Circle back for taking him away from his daughter. Sure, it amounts to another likely tease for next week, but the difficult interaction between Marcos and Lorna, now on opposite sides of the battle for mutant freedom, nonetheless made for a series of great scenes, especially when the Inner Circle being forced to rely on Marcos with this Dawn issue is bound to come to a violent head later!

Again though, X-Men/Marvel fans are bound to be most excited about John’s and Clarice’s story arc, as they travel into the sewers to start looking for Urg, after Evangeline’s tip. The two stumbling around the sewers, which are rigged with spying slime (because mutants), invisible walls and disorienting paths, helped to effectively justify why no one has detected the Morlocks’ presence in Washington, especially when even John’s tracking abilities don’t appear to be any help here. It’s actually Clarice that manages to eventually open a path to the Morlocks, and due to her visibly mutant appearance, she’s the only one that’s actually allowed to talk to Urg. John, meanwhile, is held back and forced to wait, since he can easily hide his mutant abilities if he so chooses to, on account of his normal-looking appearance. 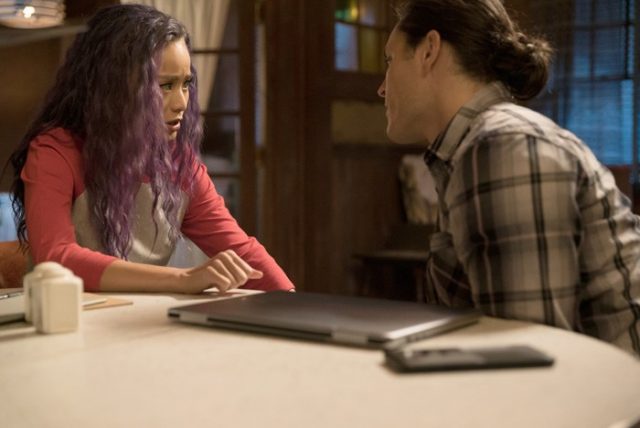 The visible mutant visage that Clarice has is something that The Gifted touched on during Season One, but here, it looks like it’s going to reach a new level of narrative potential. Urg introduces Clarice to the Morlocks, who are all mutants that have visible deformities or exaggerated features, which thus makes it impossible for them to hide their mutant abilities from human society. With Clarice being in a similar position, Urg offers her the opportunity to be a spy for the Morlocks, in exchange for valuable information on the Inner Circle’s dealings. Clarice appears to agree off-screen, since she gives John a new lead with the health department, but what implications this has for the Mutant Underground remains to be seen.

This is actually at least the third time that Fox’s live-action X-Men universe has tried to foreshadow the Morlocks, since the intro to X-Men: Days of Future Past showed several Morlocks with the same ‘M’ brands being rounded up in Sentinel concentration camps (this is our latest evidence that The Gifted likely takes place during the events leading up to X-Men: Days of Future Past’s aborted apocalyptic future), while the first Deadpool movie also briefly featured a mutant that heavily resembled Marrow, one of the more recognizable Morlocks from Marvel Comics lore. Beyond those teases though, the Morlocks never actually showed up in any of Fox’s X-Men or Deadpool movies, despite being heavily rumoured to play a key role in Deadpool 2 at one time. Perhaps the Morlocks can finally be properly realized in the television medium however, especially when this will allow them to open up a new arm of the mutant rights debate that serves as the backbone of The Gifted, since mutants with visible deformities have no chance of co-existing with humans in this universe.

With so much excitement going on throughout this episode, the only subplot that felt like it lagged a bit was Turner’s, even if it too was at least engaging to watch. Turner tries to go to the Washington Police Department to pass along information about the Mutant Underground, which eventually gets him some shared intel. After Turner fails to catch Reed and Lauren following their car accident however, Sentinel Services tells the Washington P.D. about the exact circumstances behind Turner’s firing from the agency, leading to Turner getting the boot from his police connections just as quickly as he formed them. This once again drops Turner at square one, and leaves him still failing to make anything of his continued obsession with bringing down the Mutant Underground. That’s well and good, but the lack of forward movement with Turner’s story arc just felt like it was taking up space in an episode that already had plenty of much better story developments going on. Maybe Turner will start getting somewhere next week, but for now, it’s still difficult to really empathize with his actions or invest in his storyline. He’s just blatantly being stupid at this point, and needs to know when he’s beaten.

Some Turner frustration aside though, “coMplications” was otherwise a story-packed and very satisfying episode of The Gifted. The intense means by which Reed was forced to reveal the truth about his burgeoning powers was great, as was our first serious introduction to the Morlocks in Fox’s X-Men universe. The idea of Clarice possibly falling in with the Morlocks will also create another big obstacle as the Mutant Underground continues to fracture, particularly as Marcos simply wants to be with his baby, and John is starting to doubt his mission that the X-Men initially charged him with. Is there even going to be a Mutant Underground at all by the end of the season? Perhaps everyone can still find a way to come together, but for now, it seems like the Inner Circle is more unified than the Mutant Underground, and that’s going to give them quite the advantage in the weeks ahead. After all, how can the Mutant Underground possibly work to unite humans and mutants if they can’t even unite their own forces?

The Gifted 2.3: "coMplications" Review
The Gifted delivered a story-heavy, highly entertaining episode this week, as Reed's secret is revealed, and we finally meet the Morlocks.
THE GOOD STUFF
THE NOT-SO-GOOD STUFF
2018-10-11
88%Overall Score
Reader Rating: (0 Votes)
0%