Doctor Who went to another formerly unexplored frontier for its new character setup this week, namely returning its ensemble of leads to Earth, only now in a different time period. “Rosa” unfolds from Montgomery, Alabama, United States in 1955, and as that setting and its title suggests, the episode revolves around Rosa Parks, right as she’s about to spark the catalyst for the Civil Rights Movement. This results in an interesting shift for The Doctor and her crew, namely in having to protect history as it stands, rather than trying to, “Fix” it. In fact, the episode’s structure seems undeniably inspired by The CW’s Legends of Tomorrow, or perhaps NBC’s Timeless, which are two shows that base themselves on time traveling adventures that are more about preserving history, rather than altering it (even if both shows involve the protagonists making alterations to history by accident nonetheless).

Fortunately, the experimental direction for this week’s episode of Doctor Who mostly worked to good effect, finding an interesting way to capitalize on the racial diversity between The Doctor’s new companions, while also providing another chance for The Doctor to interact with a crucial historical figure. This provided an especially sobering look at the dark side of history for Ryan and Yas especially, while Graham was left to further reflect on the loss of his late wife, Grace, who looked up to Rosa Parks and championed her as an idol. This doesn’t always have as much impact as it could have had, since, again, Legends of Tomorrow and Timeless most notably both incorporated this idea with their own black leads, so if you already have a particular taste for time-traveling television, then you’ve probably seen a lot of this social commentary before.

Still, it’s satisfying to see Doctor Who create another effective scenario wherein its leads can work together as a true collection of diverse minds. Further nodding to the apparent TV inspirations of the episode is the fact that there is a cool heist element to the plot, when our villain-of-the-week, Krasko, a released, highly racist prison inmate from the future, decides to go back in time to alter events so that Rosa Parks never has to protest giving up her seat on the bus, which would destroy the entire Civil Rights Movement before it even properly starts. It’s a clever and interesting idea for a Doctor Who antagonist, particularly when Krasko is confirmed to have a brain implant that prevents him from just killing Rosa and altering history that way, even if you somewhat have to divorce this antagonist template from other TV time travel villains that have frequently done this same sort of thing. Still, taking advantage of the extra companions and how they all try to adjust to a different time period, while working against Krasko as a more clever, heist-flavoured threat, rather than a force of nature or brutality trying to stand in The Doctor’s way for the umpteenth time, creates a lot of interesting and effective character dialogue, particularly with Ryan, who is often taking the brunt of racial abuse throughout this time period.

That said however, it’s also true that the situation is sometimes worse than it needs to be, simply because The Doctor felt like she was having a bit of an off-week this week. The companions fortunately picked up the slack, often formulating their own good ideas and clever means to try and keep history on its course, but The Doctor herself sometimes seemed to be as much of an obstacle as she was an assist, which sometimes felt a little inexplicable. The most glaring issue here is the fact that The Doctor never once warned Ryan or Yas that they may face trouble in 1955, something that she should definitely be fully aware of by this point! When she just blatantly leads them into bars, diners and other such locations without saying anything, it just comes off as a dick move for someone who has been time-traveling for decades, at least! Not only that, but when The Doctor confronts Krasko and smashes his primitive time-traveling device, then gets ahold of his time-displacing weapon, she then merely hands the time-displacing blaster off to Ryan, who sets it up to send Krasko far back into the past, and eventually does that exact thing, which The Doctor simply shrugs at. Well if The Doctor wasn’t bothered by the idea of sending Krasko to some other godforsaken point in history, then why didn’t she just do that to begin with? It would have prevented all of the resistance that the group faced in the climax!

That being said however, the actual heist element of the episode was still pretty entertaining, balancing humour and clever ingenuity to great effect. This was another strong way to effectively take advantage of The Doctor now having more than one companion too, since the three companions could cover more ground than the usual one obviously could, which allows them to move quickly across Montgomery to do things like keep passengers directed at Rosa’s bus, while also undoing the environmental misdirects that Krasko leaves lying around. This was also nicely rounded off by a few cheeky Deus Ex Machinas, namely The Doctor apparently lending Elvis a cellphone in the past, which Elvis apparently lent out to Frank Sinatra without The Doctor’s knowledge, allowing The Doctor to distract a replacement bus driver with a trip to meet Sinatra. This is a transparent way to get the show out of a corner at one point, after Krasko switches the bus drivers in an effort to alter history with Rosa Parks, but it’s pretty funny, so I’ll give it a pass.

When all is said and done, history unfolds exactly the way it should, with one last interesting character moment unfolding right before Rosa is arrested, namely when Graham tries to get off the bus after declaring that the job is done, which would have left enough vacant seats so that Rosa wouldn’t have to protest and be arrested. It’s a bit of a non-obstacle in the end, since The Doctor simply commands Graham not to get off the bus and he complies, but this seemed like more than a mere desire to get moving. Graham was likely alive in the 1950’s, after all, and while he lived in Britain and not the Southern U.S., it’s entirely possible that being in the era makes him uncomfortable in a unique sort of way, since this was a point in history that he actually lived in his ordinary life beforehand, even if he no doubt would have been a child at the time. Perhaps it speaks to Graham being the realist in the group, but perhaps it’s also a way to nicely tie together how much attitudes have changed since 1955, and how a then-mundane event like Rosa Parks’ arrest has become equally horrifying and inspiring by modern standards. Like Ryan says, it doesn’t result in the end of racism, nor a perfect future, but it does lead to things getting just that much better, and that still makes the fight worth it. 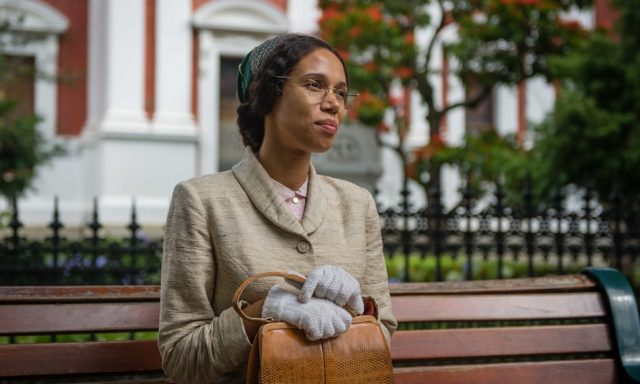 This is fitting, since it calls back to the fundamental mission of The Doctor in general; Changing (or in this case, protecting) history little-by-little, and helping to make the universe just that much better, however slightly. Sure, this episode treads familiar ground for modern time travel shows, but the unique Doctor Who spin on these ideas still leads to a pretty solid episode for the show, and further proof that the new status quo with the characters continues to work well in different time periods, not just present-day Earth and different sectors of outer space. “Rosa” feels as uplifting as it does engaging for the most part, even if The Doctor had a few uncharacteristic brain farts. Still, considering how much The Doctor has made a habit of interfering with negative history, it was a solid change in gears to have The Doctor and her allies working to protect established history for a change. This was done through a good combination of social commentary, familiar or otherwise, as well as the expected fun and charming touches that have always made most Doctor Who adventures such a delight to experience. I’m sure that it’s right back to good, old-fashioned history meddling as soon as next week, but I’m sure that the universe appreciates the knowledge that The Doctor is just as useful for keeping things as they are, when history calls for it!

Doctor Who 11.3: "Rosa" Review
Doctor Who brought its new Doctor and companions to another time period for the first time this week, resulting in an interesting shift that had the protagonists protecting history, rather than changing it.
THE GOOD STUFF
THE NOT-SO-GOOD STUFF
2018-10-22
83%Overall Score
Reader Rating: (0 Votes)
0%