Supergirl managed to kick off its fourth season on a pretty great note last week, introducing a very different kind of threat, while also building off of the consequences from prior alien threats over the show’s past three seasons. “Fallout” kept on the same gear of further developing anti-alien sentiment in the Supergirl universe, and it also managed to be a pretty strong episode, continuing to fan the flames of anti-alien resentment, while also putting the next step of the villains’ plan into gear.

The main thrust of Mercy’s and Otis’ latest plan to keep turning Earth-38 against its alien inhabitants is to hack into L-Corp’s alien image altering software, which will expose every alien pretending to don a human-like appearance. The first victim of this hack even happens to be Brainy, who discovers the hard way that his favourite pizza joint is run by people who have a strong distaste for aliens. Nia, fortunately, happens to be in the pizza place at the same time (looking for coffee for some reason?), and manages to get the employees to back off of Brainy, who appears to recognize Nia for unknown reasons. Avid DC enthusiasts can no doubt put together that Brainy thinking Nia looks familiar is no doubt because Nia’s descendant, Nura Nal is a Legion of Super-Heroes member called Dream Girl in DC Comics lore, and this is what Brainy’s confusion is likely hinting at. The idea of developing a burgeoning friendship between Brainy and Nia carries promise on its own merits as well, giving Brainy a more solid connection to Earth outside of his work at the DEO.

Nia’s very public defense of Brainy also leads into another strong scene, wherein Nia confronts James about CatCo not publishing an editorial condemning the anti-alien movement, recounting her experience at the pizza place as proof about why it’s important to defend aliens. This is also the point where Nia comes out as being a trans woman to James to boot, which is used to further highlight Nia’s personal experience with rejection and persecution, and the way that the show handled this revelation was, once again, well-done, and effectively avoided a sense of tacky tokenism. I really have to give Supergirl due credit with this scene beyond the nature of this reveal as well, because, even though the show initially breaks into its usual preachy, idealized speech from Nia about, “Justice” and, “Seeing each other”, and, “Coming together”, and all of that trite adolescent rhetoric that Supergirl loves to spout whenever it feels like grandstanding, James, surprisingly, doesn’t cave to Nia’s demands. Instead, he calmly explains why editorializing too early will do more harm than good, yet still finds enough inspiration in Nia’s speech to begin work on the unpublished editorial that he will eventually write. Not only that, but when one of CatCo’s undercover alien employees gets a cruel prank played on him, James uses the opportunity to at least tell his own employees that they shouldn’t tolerate hatred, and that helping the world see the truth is the duty of CatCo. This was a great compromise in ideals that the show handled well here, and I’m glad to see that Supergirl is still making an effort to grow up a bit, and try to employ more even-handed examinations of its political and ideological themes.

There was another big source of anti-alien hysteria beyond Mercy’s hack of L-Corp’s alien image software as well, namely the, well, fallout of President Marsdin coming out as an alien, which compels her to resign and avoid further chaos with the U.S.’s economy and foreign policy. Kara herself couldn’t do much about this development, since there’s really no easy fix, but she does at least do her best to stand behind the new president, simply known by his surname, “Baker” for now, played by Tron’s Bruce Boxleitner. Instead, Kara spent most of the episode trying to inquire more about Mercy from Lena, thus discovering Mercy’s deep-rooted history with Lex, and the exact nature of why Mercy had a falling out with Lex in the past. Since it was recently announced that we will finally see the adult Lex Luthor in the flesh at some point on Supergirl this season, I’m very interested to further explore how both Mercy and Lex end up being great foes to Lena, and not just Kara. Hell, it seems like Mercy and Lex won’t even ultimately agree with each other, since Mercy allegedly left Lex’s employ after Lex became entirely too focused on taking down Superman, rather than unseating the alien influence on Earth-38 as a whole.

Regardless, the only action of sorts this week took place while Kara was at L-Corp, which she happened to be at right when Mercy attacks with a team of hired guns, in an effort to steal Lena’s new Lex-o-suit prototype (Kara’s subtle reaction to this hidden prototype is a nice nod that there will probably be more Lena/Supergirl disagreements in the season’s future!). This presented a semi-interesting idea, since Kara can’t just immediately intervene and save the day, on account of the building being in lockdown, and Lena constantly insisting that Kara would be safer around her. This was a very unexpected and interesting way for Kara’s civilian connections to end up working against her, and it was pretty funny to keep hearing Lena claim that Kara can only be safe next to her and Eve, with Lena obviously being completely oblivious to the fact that Kara is Supergirl. The only thing that somewhat ruined this otherwise interesting scenario is the fact that Kara’s attempts to disguise her identity are pretty terrible throughout this attack (she’s been pretty awful at hiding her powers throughout this entire series to date, it seems!), and every attempt she makes to stop the mercenaries is so laughably obvious, and happens so closely to Lena every time, that Kara should have been busted several times over. Lena’s supposed to be a genius, a Luthor, and yet she just completely swallows Kara’s obvious bullshit lie about Mercy hiring lousy shots?! Come on!

This just leaves a subplot with J’onn, who is continuing to investigate the mysterious disappearance of his alien friend, Fiona, who was, unbeknownst to J’onn, murdered by Agent Liberty at the end of last week’s season premiere. Speaking of Agent Liberty, we get to see our first proper showcase of the character in ‘action’ this week, as J’onn’s investigations eventually lead him to a school gym, where Agent Liberty is shown to be a masked speaker rallying National City’s citizens against their so-called alien oppressors. Turns out that quite a few people in National City already look up to Agent Liberty, and already buy into his anti-alien message, which is a big problem for both J’onn and Kara! Kara doesn’t even avoid suffering Agent Liberty’s wrath in the final seconds of the episode either, since she falls victim to an atmospheric Kryptonite bomb (cleverly foreshadowed by Otis bringing up the DEO tainting the atmosphere with lead to drive off the Daxamites at the end of Season Two), which leaves her plummeting to Earth as the episode ends. Oh, and not only has Alex’s right-hand agent, Jensen been turned to Agent Liberty’s side, but he also frees Mercy and Otis from DEO custody after Kara captures Mercy at L-Corp, then defects with them. That’s probably very bad for Alex and the DEO, especially if Jensen is smuggling DEO technology into the waiting hands of Agent Liberty’s lieutenants! 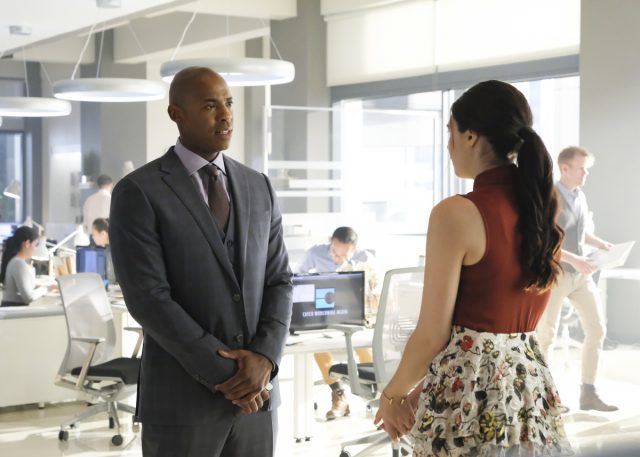 “Fallout” continues to represent a new season of Supergirl that at least appears to be striving to be deeper and more intelligent than what came before, and it’s an episode that lives up to its otherwise boilerplate title as well. The loss of President Marsdin leaves Earth-38 in a very uncertain position, especially since Agent Liberty, Mercy and Otis only appear to be stronger than ever by the end of the episode, while Kara herself genuinely has her life hanging in the balance. Obviously, there’s no show without Kara, so it’s clear that she’ll survive her Kryptonite vapour attack somehow, but with James still being unable to resume his role as Guardian, and most of the U.S. seemingly no closer to wanting to accept aliens in their midst anymore, it’s looking like the good guys are only finding themselves at more of a disadvantage with every passing week so far. This continues to build up a more interesting threat to Kara so far, namely a toxic ideal that she can’t just overcome through her sheer god-like powers. Helping the start of this season further is the fact that Supergirl is so far mercifully avoiding descending into immature adolescent platitudes too, as if it’s finally interested in having a real adult discussion about our modern world, while finally acknowledging that some big problems just don’t have easy answers. Again, the best part of Supergirl’s fourth season so far is that it’s finally allowing the show to grow up a bit more, and as I’ve said, I’m hoping that it has the courage to sustain that note in the weeks to come!