November will be a big month for Microsoft’s Games With Gold program, as it plans to offer some noteworthy titles. This relatively impressive list is highlighted by Battlefield 1, but also contains an Assassin’s Creed title and an underrated, God of War-style game, in Dante’s Inferno.

The first of November will bring with it two games, one for each Xbox One and Xbox 360 via backwards compatibility. They will be EA’s aforementioned Battlefield 1 — which is being given away at a time that coincides with the release of its sequel — and the very first Assassin’s Creed game. Thus, you’ll be able to see just how much that series has changed over the years.

Spoiler alert: Quite a bit.

While Battlefield 1 will remain free throughout all of November, Assassin’s Creed will not, and two other games will have their prices slashed during the prelude to winter. They are Race the Sun (Xbox One) and Dante’s Inferno (Xbox 360/backwards compatibility), both of which will be Games With Gold from Nov. 16-30. 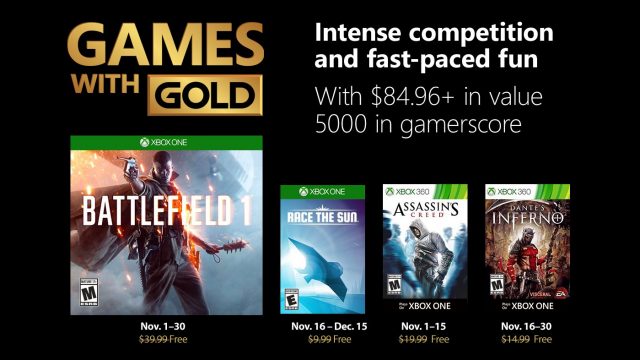 Needless to say, it’s a pretty impressive month for Games With Gold, and one that is said to offer $85 worth of value and 5000 gamerscore.