Despite falling ratings, The Walking Dead actually managed to put together a pretty strong start to Season Nine over the past few weeks, presenting a revitalized and more optimistic take on the world of the walker apocalypse. Sadly though, it seems that the momentum stalled a bit this week, as the show had to strain quite a bit to start laying the groundwork for Rick’s high-profile exit, which is apparently occurring next week. Things do end with quite the harrowing position for Rick too, but I imagine that proceedings won’t quite unfold as they appear, even though this much-anticipated payoff is still a week away, and we’re just left to deal with a lot of middling, unsatisfying story arcs in the meantime.

With Oceanside now outed as the killers of the Saviors, tensions officially boil over at the bridge camp, complete with Jed picking a fight to start raiding supplies before the Saviors fully go home. There’s an interesting situation set up here too, as Carol decides to try and defend the supplies, with Jerry and a few others also being nearby. Carol even successfully disarms Jed as well, and it initially seems like there’s going to be a quick, clean resolution to the situation… Until more Saviors pop out, and everyone starts stupidly firing their guns at each other. Even worse is that this all happens off-screen, with Rick and Daryl simply hearing the shots from a distance, and dealing with a subsequent group of walkers that end up giving them trouble. 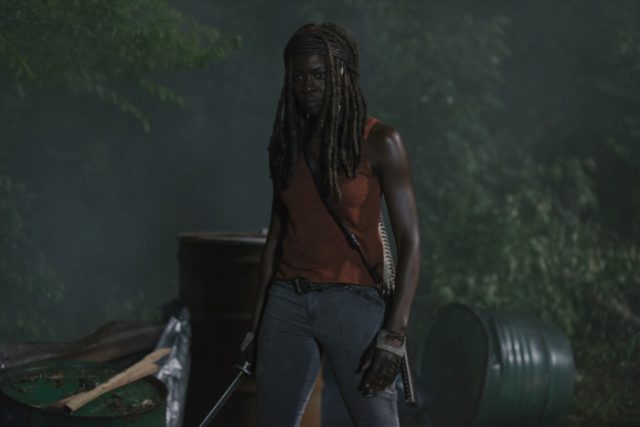 Putting aside the fact that it’s unbelievably stupid and reckless to have a gunfight when two herds are surrounding either side of the construction site (how stupid can the Saviors be here?!), but the fact that we don’t get a resolution to what happens at camp is extremely annoying. I’m sure this is to avoid distracting from Rick soon exiting the show, but even still, it seems like we’re going to leave this story arc hanging for possibly two whole weeks, if next week’s episode focuses entirely on Rick during his final bow. Speaking of Rick actually, he and Daryl also end up a victim to this contrived story turn, after Daryl intentionally ferries Rick further away from Alexandria, in an effort to prevent him from interfering with Maggie going to kill Negan. This is an initially promising idea, and forces Rick and Daryl to properly confront each other over their disagreements, but the two stupidly tumbling into a massive pit (why exactly is there a huge pit by the road anyway?), because they’d rather duke it out like a couple of middle-schoolers, felt like an idiotic and transparent way to keep these two characters out of the other storylines. This was really the best that the show could come up with in order to sideline two of its most hardened and capable survivors?

On the bright side though, once Rick and Daryl help each other climb out of the pit, and start properly going to fix the problem at the camp, they seem to bury the hatchet, and even exchange a true moment of brotherhood and friendship as Rick resolves to try and keep the herds away from the camp, while Daryl goes to see why shots are being fired. The fact that viewers know that Rick is never coming back after this helped make the two forgiving each other feel all the more poignant and heart-wrenching, even if the show once again has to come up with a pretty lame excuse to keep Rick out of the camp fight. After the herds manage to surround his horse, the horse gets spooked, and Rick gets impaled on some rebar that just happens to be on the side of the road, again. How does exposed rebar end up on the side of the highway, even in a zombie apocalypse?! Sure, it sets up a pretty intense cliffhanger for Rick’s final episode next week, but how bad does Rick’s luck have to be in order to end up in this ridiculously specific situation?! 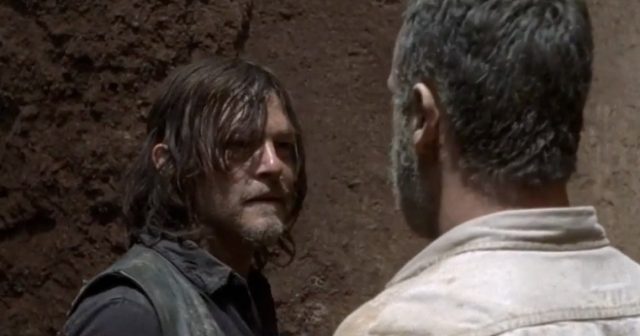 Fortunately, not every story development felt like a bore or a bust though, as Michonne at least headlines a fairly strong subplot back at Alexandria, wherein she has to try and get Negan to eat again. Negan apparently hasn’t eaten for several days, and only agrees to do so if Michonne agrees to talk with him. This actually plays off of an interesting cold open, where we see Michonne constantly get up late at night to keep walkers away from Alexandria, eventually being forced to use a bat that gives her pause. Sure, this does tie into the lame comic book adaptation cliche by Negan that Michonne is just like him, with Michonne having to justify why she’s different, but honestly, even that kind of works here. Michonne is clearly a warrior with a very potent fighting spirit, and Negan drawing attention to her being ‘domesticated’ at Alexandria really does present an interesting question. This is another inspired way for the show to play with viewers knowing full well that Rick only has one episode left to boot, and his imminent loss is bound to have an especially deep impact on Michonne, his lover.

As much as Rick is clinging to that better tomorrow, refusing to give up the bridge and what he and the other survivors have worked for, even to the point of putting his very life on the line, the show is at least doing a mostly decent job of setting up questions regarding where the characters go after Rick is gone. Sure, Maggie is also imminently about to exit the show, and she doesn’t even make it to Alexandria by the end of the episode, instead finding a bunch of skinned walkers by the side of the road that simply serve as another Whisperers tease, but the new world that Michonne in particular seems to be championing to Negan is about to face another major challenge, after two of its key leaders are about to disappear. As much as the show really had to strain to get certain characters into certain positions, especially Rick, the emotion and the atmosphere hanging overhead really is palpable. I’m starting to worry that Rick’s exit won’t live up to this level of hype next week, given how unnaturally it seems to be playing out, but I’m hoping to be pleasantly surprised.

Amid these busy events was also a brief check-in with Anne and Gabriel, as Anne is seemingly about to kill Gabriel and sacrifice him to who are almost definitely the Whisperers, but this is another annoying filler subplot that doesn’t end up going anywhere. Anne simply decides she can’t kill Gabriel, knocks him out again, pins a note on him, then ditches everyone. I guess Anne’s character doesn’t serve Rick’s exit, so she has to go. Whatever. Frankly, “The Obliged” made for a pretty frustrating episode of The Walking Dead in many cases, due to the Anne/Gabriel drama going nowhere, among other issues, even if the Michonne/Negan subplot worked well, and even if some of the ideas behind what’s motivating Rick’s exit weren’t bad. It was nice to see Daryl at least patch things up with Rick to some extent before Rick ends up gone, and Daryl having to carry the burden of leaving Rick to his fate is something that I’m sure will get explored throughout the rest of this season at the very least. Perhaps that is the perfect way to groom Daryl as a new lead for this show, especially since Daryl is likely the last real hope to get the Saviors in line before the Whisperers make their debut. Whatever the case, I’m hoping that we at least get a worthy exit for Rick next week, since that will make this disappointingly weaker episode taste a lot less bitter going down.

The Walking Dead 9.4: "The Obliged" Review
The Walking Dead stumbles with a frustrating episode this week, as the series has to extensively contort several storylines to set up Rick's exit.
THE GOOD STUFF
THE NOT-SO-GOOD STUFF
2018-10-30
70%Overall Score
Reader Rating: (0 Votes)
0%