Supergirl’s astonishing Season Four hot streak continued in a big way this week, with an experimental new episode that provided an especially lengthy introduction to Season Four’s new overall antagonist. “Man of Steel” doesn’t actually involve the presence of Kara’s, “Famous cousin”, Superman in any way, but is instead something of a pun, relating to the former identity of one Ben Lockwood (played by Smallville alum, Sam Witwer), the man who would one day become the radicalized anti-alien extremist, Agent Liberty. Throughout the episode, we explore just how Ben transforms into Agent Liberty, over a period of several years, and in relation to several of Supergirl’s high-powered scuffles against former threats, all beginning with some trouble at his father’s steel plant.

Ben’s father, played in a guest role by The Walking Dead’s Xander Berkeley, always had a distaste for aliens, but this really becomes an issue when alien workers start taking jobs at the local steel mill. After Ben tries and fails to quell an uprising among the workers, resulting in him getting an alien spine through the shoulder (a seemingly unlucky incident that beautifully comes back into play later), Supergirl intervenes and stops the riot herself, leaving Ben to be hastily stitched up and scolded by an irate Alex, who blames the workers for endangering alien life. This is a bit questionable when the DEO is outwardly designed to monitor and protect Earth from alien threats, but it’s not enough to really unseat Ben from his mild-mannered alien acceptance. 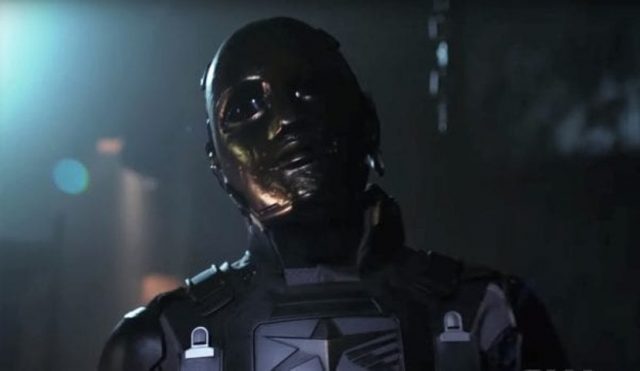 This occurs vaguely around the time Non and Indigo are defeated at the conclusion of Season One, and President Marsdin starts putting the Alien Amnesty Act into place. The result of this is more blast furnaces, and eventually the entire steel plant that Ben’s father works at, shutting down, in favour of a progressive move toward adopting super-powered alien Nth Metal construction. Left destitute and having to beg for a second mortgage at the bank, Ben has no choice but to offer up his house, the one prized possession left to his family, as collateral for a loan… Until J’onn happens to be fighting a Daxamite (this is during the events of the Season Two finale), and subdues him right next to the Lockwood house before flying off, declaring to Ben’s family that, “They’re safe now.” This is of little consequence though, as the Lockwood family house now lies in ruins from this brief alien fight, leaving the family with pretty much nothing but the clothes on their backs. Yikes.

Around this point, Ben starts losing his tolerance for aliens, and starts seeing things from his father’s point of view; Namely that aliens are super-powered, highly dangerous invaders that are out to unseat and conquer the foundation of America. This leads to Ben’s lectures becoming gradually more pointed, leading to his alien students complaining, which eventually results in Ben getting fired. After being fended off by Kara upon angrily confronting an alien student in National City’s alien pub, Ben is then left to try and plead his case with the local human populace, passing out pamphlets voicing concern about the Alien Amnesty Act. One of these pamphlets happens to be picked up by Otis Graves as well, who doesn’t know Ben at this point. Shortly thereafter, the events of the Season Three climax happen, wherein Reign starts terraforming Earth. Ben’s wife and son at least make it to safety (it might have been a little greedy to have him lose them as well, especially when this may be a smart story turn for later), but Ben’s father ends up dying after being pinned by a falling beam at his old steel factory, which Ben is helpless to lift up.

This is where Ben’s final transformation into Agent Liberty starts falling into place. After being ignored and berated by the combined likes of Kara, Alex, James and Lena over the years, all in seemingly unrelated incidents of bad luck involving alien influence, Ben finally snaps, and decides to drunkenly burn down the new Nth Metal factory, the L-Corp-sponsored replacement for his father’s steel mill, with his father’s steel mill buddies, using a bunch of molotov cocktails. After the alien that accidentally stabbed Ben with a flying spine from years ago stumbles out due to the flames, Ben’s rage then boils over, and he beats the man to death with a pipe! This is when Mercy comes into the picture as well, after Ben starts rallying a secret ‘neighbourhood watch’ to start attacking aliens, with Mercy declaring that she cleaned up the, “Sloppy” DNA evidence left by Ben’s crew, while also providing him with a means to obscure his identity and spread his message, under the careful watch of Mercy and Otis. This alliance is what ultimately leads to Kara almost dying on account of Earth’s atmosphere being laced with Kryptonite in the present day, forcing Lena to come into the DEO and forcibly confine Kara into a spacesuit-like exoskeleton. This exoskeleton will allow Kara to survive, at the cost of not being able to breathe or properly interact with Earth for the foreseeable future.

Not only was it excellent to see how the show brings Ben into the orbit of Mercy and Otis, and how he’s now been re-positioned as a subversive figurehead while Mercy and Otis might be the bigger threats for the season (at least for now), but it was also fantastically inspired to see virtually all of the show’s current leads have some sort of inadvertent hand in Ben’s breakdown and subsequent transformation into Agent Liberty, all due to either inaction, arrogance or recklessness. Better still is that this is a surprisingly bold, episode-long indictment of Supergirl’s own heavily left-leaning political bias! For the first time, the show is actually providing a candid, uncompromising and difficult dressing down of its own highly liberal politics, and how unexpected and dangerous new threats can arise when our focus starts finding itself too much in the wrong direction. There was no fairy tale solution. There was no last-second win. There was no cardboard villainy. Agent Liberty even proves to still, after all of his bad luck and his metamorphosis into a big bad for this season, have dimensions and surprising layers as well, insisting in the final seconds of the episode that Mercy and Otis not kill the traitorous Agent Jensen, since he doesn’t feel that they should kill other humans. Ben even successfully bargains for Jensen’s life by suggesting an operation to break into the DEO, perfectly serving as a lead-in to next week’s episode.

Reign may have been a solid step in the right direction last season, but Agent Liberty is the kind of complex and interesting major villain that Supergirl has too often been starved for, and that was flawlessly proven during this episode, which isn’t just a home run for Season Four, but may be one of the best Supergirl episodes ever aired to date, period! It takes serious courage to so openly attack the political stance of one’s own show, without a last-minute resolution or an easy answer. Agent Liberty is a villain that was formed by difficult situations that have no easy answers, and you can see the clear tragedy and potential for redemption that still seems to creep just under the surface, even after he’s become a killer and an extremist. Suddenly, we see the failings of the show’s heroes in a very sobering way, just as we desire to find a better outcome for Agent Liberty, even though it seems like there’s just nothing anyone can truly do for him. This nicely mirrors the situation with Kara, who is now facing her own seemingly impossible problem, being sealed in an exosuit that will change her situation for at least the next few weeks, even though I imagine that she’ll probably be out of it by the time we get to this December’s big crossover event between Supergirl, Arrow and The Flash. I never imagined that Supergirl would be capable of this much raw intelligence and impartial commentary, but I’m glad to see that it surprised me with, “Man of Steel.” Maybe, if this high-quality writing holds, Supergirl might actually manage to dodge the Arrowverse continuity’s evident Season Four curse!

Supergirl 4.3: "Man of Steel" Review
Supergirl devoted an entire episode to exploring the motivations and transformation behind Agent Liberty this week, leading to both one of the best villain portrayals and best episodes that the show has seen to date!
THE GOOD STUFF
2018-10-30
96%Overall Score
Reader Rating: (0 Votes)
0%