Superheroes and video games are a match made in Heaven, but it hasn’t always felt that way. In the days before the masterpiece that is Batman: Arkham Asylum (not to mention its excellent but not as good sequel, Arkham City), games based on superheroes tended to be of the rushed and mediocre variety. Hell, many were downright bad, with SEGA’s Thor: God of Thunder being a perfect example. It’s amazing how much things have changed since then, though, thanks not only to Rocksteady but also Marvel and its partnership with Sony, the latter of which brought us this fall’s super polished and incredibly entertaining Marvel’s Spider-Man.

While some were disappointed in the lack of Black Cat content, they likely won’t feel the same way after playing the game’s first piece of paid downloadable content. That is, The Heist, the beginning of a three part storyline that takes place after the main campaign. Reason being is that, even if it’s not as good as the core game, it’s chock full of Black Cat content and has a storyline that basically centres upon her.

Things start with a heist, which is fitting given the title. Spider-Man is on the scene, though, as Peter and MJ discovered that at least one mafia family had intentions of stealing a specific piece of art. Black Cat is also there with an agenda, but that isn’t discovered until later, after the human arachnid has taken care of a bunch of weapon-toting thugs. What results is a visually impressive mission, but one that doesn’t exactly excite with its gameplay. This is par for the course with a lot of what’s to be found within The Heist, because while its presentation continues to be absolutely top notch, it doesn’t offer enough variety to set it apart or cement itself as something great.

This particular opening mission begins with an outdoor battle before transitioning into the all-too-quiet museum. There, Peter Parker discovers that things aren’t as they seem, and ends up fighting more and more goons who want nothing more than to steal art. This boils down to a few battles, which are followed by a segment wherein Spider-Man must stop and defeat highlighted enemies as they try to run out of the museum with art in hand. 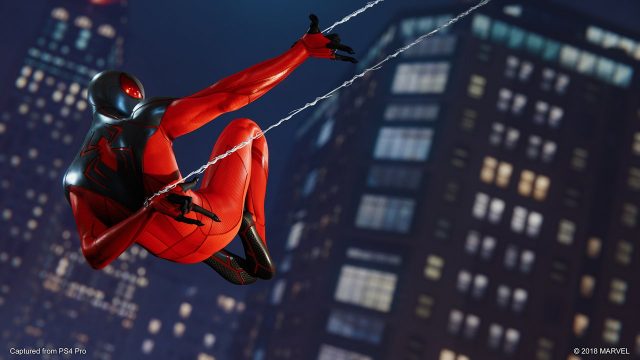 Throughout what is a two-and-a-half to three hour-long addition, players will find themselves swinging throughout the city in pursuit of Black Cat, who’s after multiple things of importance. She isn’t alone, however, because different mafia families are also after the same things and will stop at nothing to get them. This includes killing Spider-Man, which is why they’re the main enemies. They’re jerks, too, because they swarm in numbers and don’t let up. This is especially true of the big guys, who now carry mini-guns that pack quite a whallop.

The Heist is not an easy add-on, and that will please those who like a challenge. It gets progressively more challenging, but is never terribly unfair, although the final battle is pretty insane. This concluding mission finally adds some of the variety that the rest of this DLC is missing, too, in the form of forced stealth. Therein, players must work with Black Cat (and assign her enemies to stealthily take out), in order to dispatch of 15-20 goons, including snipers.

A lack of variety is the biggest issue here, as is the fact that everything feels all too familiar. Outside of the miniguns, and a few special weapons that appear at the end of the chapter, fights are mostly the same and there’s a whole lot of them. This is added to by the new Screwball challenges, which take the form of combat encounters and timed swinging events. They’re pretty mediocre at best, and really aren’t all that fun or unique. The swinging ones, especially. All they task you with doing is following a line in the sky, which leads you on a path that you need to take between multiple nodes that must be destroyed using webbing.

Outside of Screwball, and one or two decent but unspectacular side missions, there are easy-to-find collectibles that take the form of paintings. They’re said to have been stolen and hidden by the original Black Cat, and a police officer has tasked Spider-Man with finding them all. It’s easily done, thanks to the map and the radar that leads you almost right to them. All you need to do is use radar to search an area for something that can be grabbed and broken with dual webbing, including air conditioners, posts, and more. It won’t take you long to find all ten of them.

That said, there are also crimes to partake in within this separately launched DLC, much like the ones found in the main game. It just so happens that some of these are different.

The new crimes are based around bombs, and come in a couple of different varieties. The first is all about using a tiny spider drone to find bombs that are hidden under vehicles, through the use of both radar and sound (as they make a loud beeping noise). The other, then, is all about defusing bombs that have been placed on different parts of tall buildings. Once you solve a circuit puzzle to disable the main one, you’re forced to find two more secondary devices and use electricity to render them moot.

If you loved Marvel’s Spider-Man, then you’ll definitely like this. It’s more of the same, with the same incredible presentation, but it’s not as good as it could’ve been. This all boils down to repetitive missions and challenges with too many fights, as well as side content that won’t set the world on fire. That said, more Marvel’s Spider-Man is never a bad thing, and you do unlock more suits upon completion of certain tasks.

We’ll be getting more of this soon, too, because The Heist is just part one of three. For that reason, it ends with an unsurprising “To be continued” message.

**This review is based on the PS4 exclusive. We were provided with review codes.**

Marvel's Spider-Man: The Heist DLC Review
It's hard to really complain about more of the same from Marvel's Spider-Man, but there's no denying that The Heist could've been better. It's solid, and provides a good three hours of gameplay if you try to do everything, but it's not all it could've been.
Visuals95%
Audio93%
Gameplay74%
Storyline78%
The Good Stuff
The Not-So-Good Stuff
2018-11-04
75%Overall Score
Reader Rating: (0 Votes)
0%