Legends of Tomorrow once again set off with quite the interesting premise this week, as a time disturbance in 1977 leads to the Queen of England being spotted partying at a punk concert. Clearly, something is amiss, and when the magic detection software of the Waverider confirms that magic is afoot in the era, the Legends go to 1977 England to correct the timeline before the British monarchy collapses. More importantly though, “Dancing Queen” actually served as an excuse to introduce a new addition to the Legends in a very unexpected way, at least, in a manner of speaking, but I’ll get to that.

Humour once again took a heavy focus in this week’s episode, to the point where it basically overrode most of the other story elements. The core plot of the episode involves Ray unwittingly being stuck undercover with the punk band that the Queen ended up rocking out to in a very public fashion, known as ‘The Smell’, a band that didn’t previously exist in history. The obvious joke here is that Ray is by far the most kindly and clean-cut member of the Legends, and would logically fit in the least with this punk crowd. Ray trying to pass himself off as an unstable American immigrant named, “Rage” is indeed quite funny too, with Ray having to do things like get a tattoo and kidnap a dog in order to prove his loyalty to the group, which is definitely as amusing as it sounds! 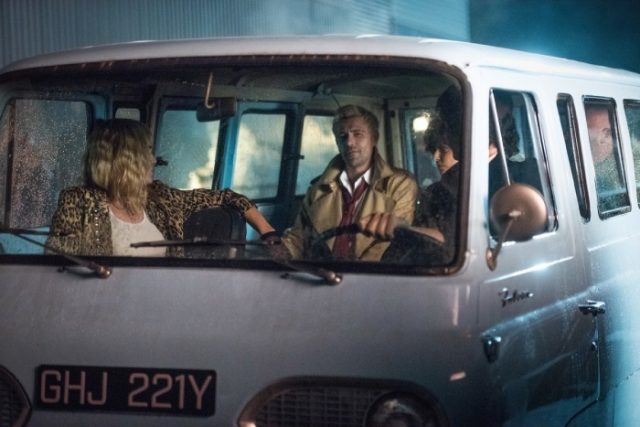 Most of all though, Ray ends up bonding with the punk group’s leader, Charlie, after Constantine incorrectly claims that one of the other band members is a disguised leprechaun. After the rest of the punk band discovers a newspaper depicting Ray with the Legends at a disco during an American mission that occurred in the same time period (this was a great way to have former unrelated events with the Legends unexpectedly cause a problem for Ray!), Charlie defends Ray, and later confides in him that she is a shapeshifter, the Fugitive that was identified by the Waverider. This allows the Legends to proceed with their mission to boot Charlie over to Hell, but Ray refuses to comply. Charlie apparently knocks Ray out off-screen however, appropriating his Atom suit to try and kill the other Legends, only to be eventually neutralized and pushed into the nearby wall by Zari. The idea of Charlie impersonating Ray and endangering the Legends could have been very cool, but it sucks that Ray quite easily deactivates the suit and subdues Charlie using just his own voice. Had this been a two-parter, a fake Ray embedding themselves within the team could have lent to a pretty interesting episode the following week!

Alas, that’s not what ends up happening. Instead, Charlie keeps shifting through the faces of the team to try and plead with them not to send her to Hell, with Zari, who is holding Charlie down with her wind magic at this time, eventually declaring that she can’t condemn Charlie, after being unable to send someone with Amaya’s face to Hell (this ties in with Ray previously telling Charlie that Amaya used to be the group’s moral compass, even though he could just as easily fill that role now). Constantine then puts a spell on Charlie so that she can no longer shapeshift, which just so happens to permanently trap her in Amaya’s form! Again, this is a bit of an unsatisfying solution for this week’s magical threat, since, if Constantine could just nullify Charlie’s shapeshifting powers at any point, then why bother sending her to Hell in the first place? Once you get past that though, Charlie being forcibly confined to the Waverider sets up our surprise new team member; Amaya!… Again… Sort of. Yes, Amaya’s storyline was definitively wrapped up at the end of last season, but Maisie Richardson-Sellers wasn’t actually leaving the show in the end, instead simply assuming the role of a ‘rebooted’ character for Season Four. How Charlie is going to serve the team without any powers is a bit of a head-scratcher for now (Constantine claims that there’s no way to give her back her shapeshifting abilities), but regardless, it’s nice to see that Richardson-Sellers can stay on the show in a different form, despite Amaya’s arc truly having gone as far as it could feasibly go by the end of Season Three.

Speaking of Amaya, Nate ends up unsurprisingly settling in even more with the Time Bureau this week, and eventually confesses that it’s for the explicit reason of not wanting to be on the Waverider, because everything reminds him of Amaya. The Nate subplot here wasn’t quite as strong as last week however, since it mostly ended up going over the predictable and cliched series of jokes about office bureaucracy and paperwork that anyone would expect, and not much else until the end. Nate does briefly go far back into prehistoric times with Gary at one point, in an effort to groom a new, “Time Bro”, but even this scene doesn’t feel like it carries much importance, beyond setting up our latest joke about Gary’s bumbling incompetence, when he brings back a killer magical plant as a ‘gift’ for Nate. Gary even gets a romance tease with a hot dog girl in this episode, but the show seems to abandon this by the end too, after Gary just erases her memory (I guess he didn’t like her joke about sideways time zones?). It was annoying to not see much done with this Nate storyline, which mostly just served to fill up space in an episode that was clearly tooled to mainly serve as a device for Charlie joining the Legends, and Sara giving Nate her blessing to indefinitely stay at the Time Bureau. I will say however that Sara’s expression when Nate talks about Amaya being gone from the Waverider was pretty priceless though, and her sudden insistence that Nate stay off of the ship at least closed out this subplot on a funny note.

The stronger subplot in this episode was shared between Zari and Constantine, which did somewhat make up for Zari’s less successful subplot last week. Constantine decides to wander off, being in England and all, and ends up going to a pub, where Zari eventually finds him. It turns out however that the bartender that Constantine appears to be hitting on is actually his young mother, who dies in childbirth when Constantine is born. This was a much darker and more emotional storyline, but it still did a great job of expanding Constantine’s character, while allowing Zari to bond with someone more believable than Ray when it comes to struggling with her inner darkness. Constantine trying to kick his father in the testicles in an effort to erase himself from existence (isn’t that basically a blatant suicide attempt in front of Zari?!), only to be warped to the ground because of the resulting time paradox, at least injected some of that familiar Legends of Tomorrow charm, but for the most part, Constantine’s failures once again come to the forefront, and leave things on a melancholy note. There is a bit of hope here however, as Zari and Constantine seem to be striking up an unlikely friendship, and I do feel that Constantine’s presence will extensively benefit Zari this season. Zari has been able to have something of a bond with Sara, due to their similarly tragic backstories, but Constantine is a twofer, having both the tragic backstory and the magical affinity. A pairing between these two could definitely serve as sharp storytelling inspiration, while also preventing either Zari or Constantine from becoming too depressing and bringing the tone of the show down too far. 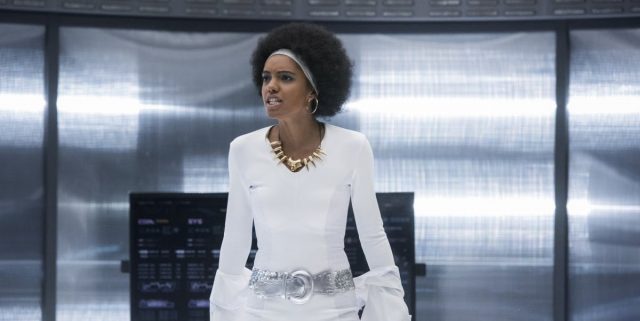 “Dancing Queen” certainly wasn’t one of the stronger episodes of Legends of Tomorrow, and it simply seems to exist to invent an excuse to re-introduce Maisie Richardson-Sellers to the show’s lead ensemble. Still, there were good elements to this week’s episode, with the show’s cheeky sense of humour still going stronger than ever, Ray getting a chance to play with his boy scout image, and both Constantine and Zari finding shared comfort in their miserable family histories. This did undeniably feel like a filler episode in many other respects though, with Nate and Gary ultimately not doing much of value on-screen, and the show frustratingly wasting several promising ideas surrounding Charlie being an outwardly harmless shapeshifter Fugitive. I guess it doesn’t matter now, because Charlie is stuck with the team in her new Amaya-inspired form, even if she is locked up for the time being. Still, missed opportunities aside, at least the ensemble shifting duties are out of the way, so we can hopefully get back to some more clever and engaging adventures next week.

Legends of Tomorrow 4.3: "Dancing Queen" Review
Legends of Tomorrow mostly slowed down to introduce a new/old team member this week, with a mixed batch of subplots that either offered solid drama or just took up space.
THE GOOD STUFF
THE NOT-SO-GOOD STUFF
2018-11-06
73%Overall Score
Reader Rating: (0 Votes)
0%