NOTE: Full spoilers for this episode of, “The Walking Dead”, including the ultimate fate of Rick, are present in this review

The time has finally come. Andrew Lincoln’s Rick Grimes is making his final exit from The Walking Dead’s TV adaptation, in turn also capping off the current era of the show… Which was already a new era following the time jump at the start of the season? Oh well, whatever. What matters is just how well Rick’s send-off ultimately goes, and fortunately, it doesn’t disappoint for the most part. “What Comes After” is both an emotional and thrilling exit for Rick’s character, one that even culminates in a surprising turn that viewers likely won’t anticipate in most cases!

After managing to get himself stuck on rebar, Rick naturally manages to pull himself free after some clever trickery with his belt. He even manages to return to his horse and keep on riding, relentlessly pursued by a massive herd of walkers that refuses to let up! Most of this episode’s core storyline with Rick simply involves him trying desperately to outlast the herd on his horse, and sometimes on his own two feet! Sure, sticklers will be bothered by the fact that Rick having a massive hole in his side should have led to him bleeding out several times over, and there’s no way that he would logically make it anywhere if this were real life, but we’ll allow some concessions for television. If nothing else, the constant threat of the herd does keep the stakes pretty high, especially with Rick’s final fate managing to be highly uncertain throughout the entire episode. 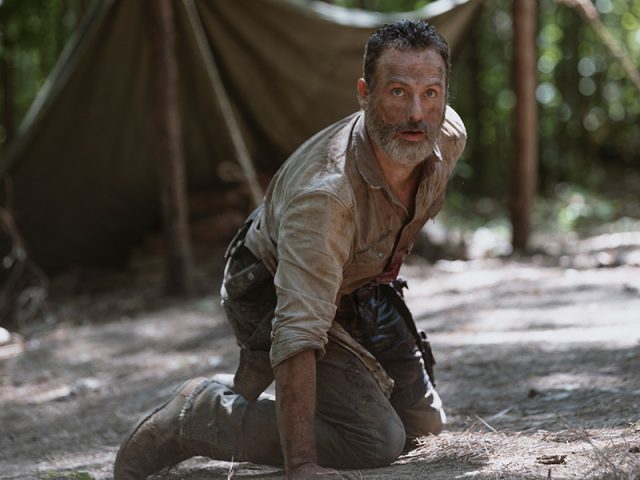 While Rick is riding and shambling away from the walkers, who somehow never manage to gain on him despite how slow he’s moving (again, concessions for TV), he is visited by a series of ghosts of characters from the show’s past. This allows Jon Bernthal, Sonequa Martin-Green and the late Scott Wilson to briefly reprise their roles as Shane, Sasha and Hershel Sr., respectively, keeping Rick moving by allowing him to reach into his sub-conscious and keep himself struggling to live. Shane allows Rick to find his courage and ferocity, while once again facing the likely knowledge that Judith is actually Shane’s daughter and not his, while Hershel keeps Rick focused on the heartfelt future that he tried so hard to build, and Sasha reminds Rick of the resourcefulness that he has always used to survive. These sequences get Rick out of jams with the walkers more often than they probably should, but they’re great nostalgic sequences that fans are bound to love. You don’t see Lori and Carl, surprisingly, despite it being logical that they would appear during these ghost-fueled sequences, but perhaps this could be interpreted as Rick’s survival instincts kicking in, since seeing his dead family would probably just motivate him to give up and let himself get consumed by the herd.

While this desperate struggle to survive unfolds with Rick, we also see a subplot unfold with Maggie, as she finally makes it to Alexandria to carry out Negan’s murder. Michonne stands in Maggie’s way and attempts to talk her down, with Maggie having to argue her case until Michonne finally relents and gives her the keys to Negan’s cell. This was another smart, if slightly predictable way for the show to try and pull the rug out from under audiences, as Negan taunts Maggie into trying to enter his cell and finish him off, only to refuse to come into the light. When Maggie hurls Negan into the light so that we can see him however, we see why the show has kept him in the shadows for the entire season before now; Negan has become decrepit, broken and sad, and he was only taunting Maggie so that she would kill him. Obviously, Maggie doesn’t go through with it, since this would be depriving the series of one of its most iconic villains for good, but her line about coming to kill Negan, only to see that he’s already dead, was pretty powerful. It’s the closest we get to a resolution for Maggie this season as well, since this is the last we’ll be seeing of Lauren Cohan on the show for now! Yep, this was Maggie’s exit. No fanfare. No warning. Maggie obviously isn’t dead, so Cohan has an easy opportunity to return to the show later, but fans of Maggie’s character will probably be frustrated that the show ultimately shrugged at Maggie’s departure, instead devoting all of the focus to Rick’s exit instead. 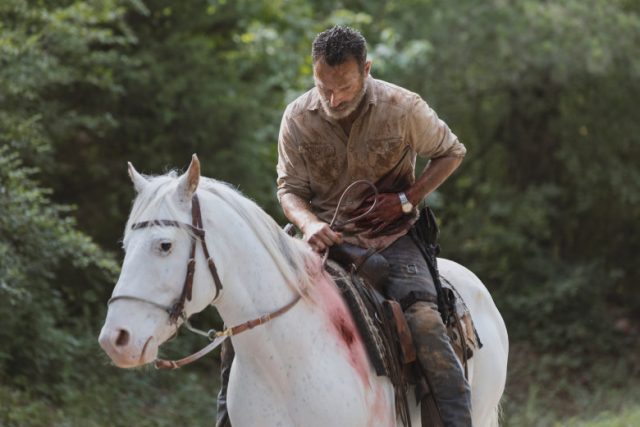 So in the end, after all of the ghost sequences, and Rick constantly trying to press on back to camp, what happens? Well, Rick makes it to camp, sees a few bodies lying around, and frustratingly, we never quite get an answer as to what happened during this shootout, and that becomes all the more true with the episode’s conclusion. Regardless, Rick manages to fumble his way over to the bridge, and this nearly seems to be his end, before the other survivors miraculously show up and kill enough walkers to give Rick a few extra seconds… Only for Rick to shoot some dynamite and blow up the entire bridge! This handily takes out the herd while also leading the walkers away from the other communities, but Rick also appears to have been consumed by the explosion. This leaves several characters, particularly Daryl and Michonne, visibly distraught, and shocked at the loss that they’ve just sustained. The leader of the new world is dead, blown up in one last sacrifice to try and save the future that he worked so hard to build!

… Except he’s not dead. Yep, in a move that’s probably bound to infuriate some people that were hoping for a more committed and decisive exit for Rick’s character, Rick inexplicably survives a dynamite explosion about ten feet away from him, rebar through the side, God knows how long of wandering in the hot sun while bleeding out, and being washed down the river (how did he get in the river? Shouldn’t the explosion have blown him the opposite way?). It’s more than a little ridiculous, and yes, it does smack a bit of being a cop-out, with AMC predictably refusing to commit to just killing Rick off and being done with it. Instead, it turns out that the mysterious survivors that Anne was talking to actually aren’t the Whisperers, apparently, and Anne just so happens to stumble across the still-dying-but-alive Rick at the end of the river. She utilizes Rick to bargain over the walkie with the mysterious helicopter-piloting folks, and Rick is just taken away in a chopper with Anne (is this Anne’s exit too then?). That’s it. Yes, it is a little frustrating that Rick impossibly survived when he should have died about five times over during the events of this episode, but AMC has since announced that they will be continuing Rick’s story in at least three TV movies on their network. This is definitely AMC having their cake and eating it too, sure, but I guess that I can’t complain if those movies end up being good. We’ll have to see. 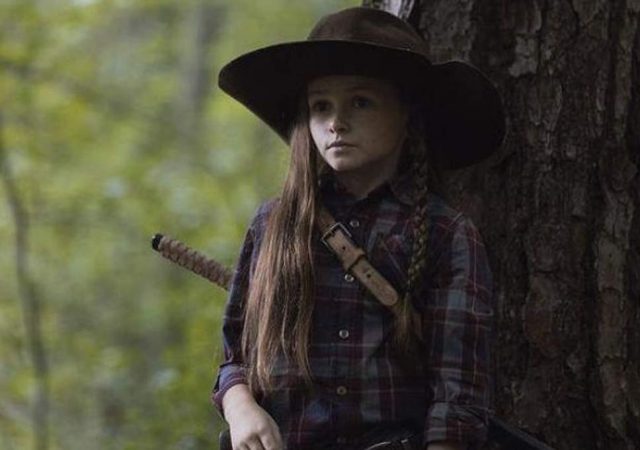 Perhaps an even bigger shock than Rick’s impossible survival in the end is this episode’s final conclusion, which sees several familiar personalities from the Walking Dead comics running afoul of a bunch of walkers, only to be bailed out by a mysterious girl wielding Rick’s trademark Colt Python Magnum. When the new survivor crew, which consists of recognizable comic book personalities, Yumiko, Luke, Connie, Magna and Kelly asks the girl her name, she says it’s, “Judith.” Yes, The Walking Dead has undergone another surprise time jump, moving ahead a whole six years from Rick’s disappearance! Damn! It’s certainly unusual to do this with three episodes still left in Season Nine’s front half alone, but at least we did get a mostly fitting wrap-up for both Rick’s character and the former era of AMC’s The Walking Dead series. “What Comes After” may not have been a perfect exit for Rick, especially if you were hoping that he’d ultimately sacrifice himself in a blaze of glory (I mean, he almost did, to be fair), but this episode still presented a lot of excitement and drama, not to mention that it very nicely made up for the weaker episode that we got last week. Once again, it’s a brave new world for The Walking Dead’s TV canon, and we’ll have another very different walker apocalypse to look forward to as soon as next week!

The Walking Dead 9.5: "What Comes After" Review
Rick Grimes makes his exit on a thrilling and emotional episode of The Walking Dead this week, leaving the series once again on the verge of a whole new era of post-apocalyptic survival.
THE GOOD STUFF
THE NOT-SO-GOOD STUFF
2018-11-06
84%Overall Score
Reader Rating: (0 Votes)
0%