Those who love horror, including yours truly, should be thankful to people like Howard Phillips Lovecraft for what they did for the genre. It’s writers like them, whose dark, twisted, surreal and creative imaginations helped pave the way for some of the creepiest stories ever told. This includes H.P.’s own works, which have turned into classics and been read by millions since publication. Stories like Dagon, At the Mountains of Madness and Call of Cthulhu.

Despite his influence on horror and the literary world, H.P. Lovecraft hasn’t had a great track record when it’s come to gaming. As it often is with licensed works, some releases have fared better than others, but as a whole they’ve failed to set the world on fire or gain great success within the industry.

Enter Call of Cthulhu, a game that was built from the ground up in homage to, and through inspiration by, the tabletop game of the same name. Not to mention Lovecraft’s own story. It comes to us from Cyanide Studio and its publishing partners at Focus Home Interactive, and is currently available for Xbox One, PlayStation 4 and Windows PC.

Beginning in 1924 Boston, Call of Cthulhu: The Official Video Game centres upon a lush of an investigator named Edward Pierce. In the midst of his own existential crisis, the struggling and booze filled private detective finds himself called on to investigate a very strange case. It’s this case that forms the basis for the game at hand, over the course of its eight to ten hour-long run time.

At the heart of this first-person investigation are the deaths of Sarah Hawkins — a popular painter who lived in near isolation on a small island off of Boston’s coast — and her family, which consisted of her husband and young son. The family is said to have died by fire, after an accident at their rather worn and somewhat dilapidated cliff side mansion, but things aren’t adding up. It doesn’t help that the only available clue is a creepy painting.

This is a story of not only horror, but also madness and the things that lurk within shadows. The painting is a nightmarish thing, and so too are other images from the artist’s past, which depict strange creatures the likes of which humanity has no explanation for.

Call of Cthulhu is, at its heart, a first-person adventure game with horror elements. It’s heavy on dialogue, investigation and exploration, and doesn’t really have any combat to speak of. Thus, this isn’t a game for those who are looking for action. It’s slower paced, and is certainly more methodical than your average horror-based affair. Action comes in the form of stealthily hiding from guards and others, solving puzzles to create distractions and things like that.

The game plays out over the course of fourteen chapters, and as it does it takes players throughout the fog covered landmass on which it’s based. This includes visits to a hospital and its basement sanitarium, as well as quite a bit of time spent searching what remains of the Hawkins’ own manor. Other locations must be left unsaid, because they’d spoil things for anyone who wishes to play this campaign. 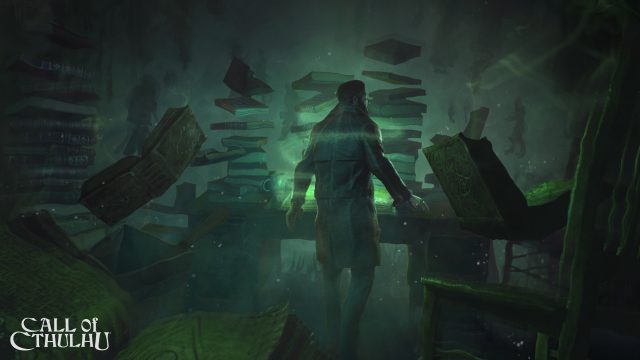 Behind everything is an RPG-esque stats system, which is imperfect in the way it factors into gameplay but still remains a central focus. It’s here where players can improve upon Mr. Pierce’s required skills, by assigning earned character points to categories like Investigation, Psychology, Eloquence and Strength. As they do so, they’ll go up in ranks and the character will become better at whichever skill has been bolstered. In addition to this, there are also two other skills (Medicine and Occultism) that can only be bettered by finding things like medical textbooks and items used during occult rituals.

The idea behind this is that every player will create a different build of Edward Pierce, and will do so by prioritizing the skills that they would prefer to use. In practice, this doesn’t always work as intended. For starters, the player begins at approximately level three of five in most, if not all skills, and this is likely due to the game’s shorter length and limited skill points. Secondly, there are times where Edward does things that are beyond his skill level, making it feel as if this part of the game was maybe added in at a later date. Still, it’s important to upgrade the protagonist’s abilities, because doing so can help you sway many discussions to your favour, be it by using things you’ve learned through investigating or by speaking in occult terminology. Each conversation can have multiple branching paths, and how you respond can also change the game in certain ways. So, too, will drinking alcohol.

This is, after all, a game with more than one ending.

Investigating scenes can be as easy as looking for objects, searching for clues to a puzzle (like a safe’s combination), spotting hidden items, or speaking to the island’s sometimes odd inhabitants. Edward can also reconstruct scenes to see into the past, but it’s not made clear as to how he’s able to do so given that he’s just a man. Meanwhile, players are rewarded for looking for hidden items and passageways through not only achievements and trophies but also character points that can be allocated to the game’s last skill: Hidden Objects. Upgrading it seems to make it easier to find such things.

On paper, Cyanide’s Call of Cthulhu sounds like a good horror game, and it has the unsettling narrative, settings and characters befitting one. The problems lay in the execution, and perhaps even the budget. What was good on paper hasn’t necessarily translated into that good of a game, leaving it as something that some will enjoy and others won’t like much at all. It isn’t helped by the fact that, after a good opening set of four or five chapters, things begin to go downhill. If things had continued as they were, it would’ve been getting a better score from me, because I quite enjoyed what I played during my first session.

I don’t want to say that Call of Cthulhu tries to do too much, because it’s not like it’s a far reaching game. It’s a contained horror story, in which one must use dialogue and investigation, plus a moderate amount of puzzle solving and stealth to achieve victory. It obviously wants to be better, though, and simply doesn’t have the greatest parts in place due to whatever reasons. Individually, some things work better than others, but as a sum of its parts this experience is mediocre at best. Its stealth is uninspired and basic, its investigations borrow from other games and offer little in the way of unique gameplay, and its dialogue trees have certainly been done better in other titles. On top of this, its cutscenes are all quite compressed, to the point where they lack detail and resolution.

With all that having been said, there’s something about this game that makes me incapable of giving it a bad score. It’s very rough, leaves a lot to be desired and doesn’t do much very well, but I didn’t dislike it like some other reviewers seem to have. It is very, VERY rough, but it has some sort of charm to it.

On the presentation side of things, Call of Cthulhu, as mentioned, isn’t anything special. Its main character models look alright and animate decently, but some of the facial expressions leave something to be desired. Some environments look decent, while others are quite drab and basic-looking, and the fog that covers the island doesn’t help. Nor does the compression, which is so obvious and perplexing that it shocked me.

This same seesaw of quality applies to the audio, which is good at times and not so great at others. The writing is decent, but some voice actors could’ve been better cast. Things start out alright in this department, but as more and more characters get introduced, the bar drops. Call of Cthulhu is good at creating a depressing, disturbing and unsettling atmosphere, though, so the sound works well in that area.

In conclusion, I can’t in good conscience recommend spending a lot of money on Cyanide’s Call of Cthulhu. I say that because this isn’t a game for everyone, nor is it something that exudes a ton of quality. The title has some charm despite its mediocre gameplay and technical difficulties, but it’s going to be the H.P. Lovecraft diehards who’ll see it most. Even then, it’s hard to justify spending $79.99 Canadian on such a game, or even the American equivalent of that.

Wait for a sale on this one, or pass on it if it doesn’t sound like something you’ll enjoy. You’ll need to overlook some faults to see what lays underneath.

**This review is based on the PlayStation 4 version of the game, which we were provided with.**

Call of Cthulhu Review
Call of Cthulhu is a flawed game, but underneath its issues lays something that some horror fans will enjoy.
Visuals52%
Audio59%
Gameplay52%
Storyline65%
The Good Stuff
The Not-So-Good Stuff
2018-11-08
52%Overall Score
Reader Rating: (0 Votes)
0%