The Walking Dead is in for quite the challenge with its remaining three episodes of 2018, now that central character, Rick Grimes has made his exit from the series. Not only has the show given Rick his final send-off, at least until we get those made-for-TV movies for his character that AMC has since announced (of course), but it’s also undertaken an even bigger time jump than the one that followed Season Eight. Now picking up a whole six years after Rick’s disappearance, “Who Are You Now?” thus shows how the post-apocalyptic communities have changed after failing to come together on the bridge construction so many years ago, or at least a couple of them.

It was Alexandria and The Kingdom that got the focus in this week’s episode, with the status of The Hilltop and Oceanside pretty much being a mystery for now. Alexandria took on the main storyline of the episode, picking up immediately after last week’s cliffhanger conclusion, wherein Judith rescues five mysterious survivors from a walker attack. It turns out that Judith had wandered off from Aaron, Rosita and Eugene as well, upon hearing that some people needed help. Judith can clearly handle herself, at least with Rick’s magnum, but she nonetheless gets scolded for her reckless heroism, forcing the hands of Alexandria’s other survivors, and making them deliberate on whether or not to take in the new people that Judith has rescued. 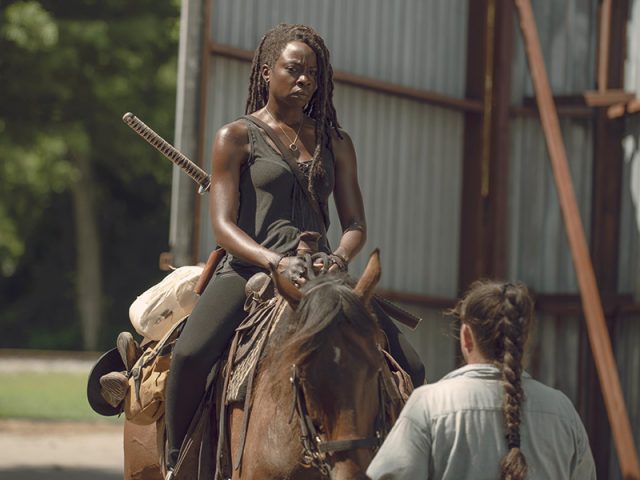 As I said last week, all of the new survivors should be recognizable for fans of the Walking Dead comics. The group more or less appears to be led by former truck stop waitress and prison inmate, Magna, a tough and brash survivor, with the other members of Magna’s group being Luke, a good-natured former music teacher and the sole surviving male in Magna’s party, Connie, a deaf former journalist who is honest and intelligent, Kelly, Connie’s rough-edged and protective young sister, and Yumiko, Magna’s girlfriend, who is injured after being saved by Judith, and is unable to face the council of Alexandria with the others. The council seems intent on honestly thinking over what to do with the new survivors, save for Michonne, who distrusts them immediately, and is eager to get rid of them.

This core storyline with Michonne and Magna’s crew is easily the strongest point of the episode. Picking up with Alexandria in general proves to be very interesting, as we see a few subtle, but far-reaching changes. We see that Laura has apparently abandoned the Saviors and fully aligned with Alexandria, for example, to the point of even serving on the town’s council as one of Alexandria’s most respected citizens! We also see that Gabriel has entered a romantic relationship with Rosita, which does somewhat come out of nowhere, but it does provide an interesting new take on Eugene’s unrequited feelings for Rosita, particularly now that Eugene appears to have become a much more proficient fighter and survivor over the six-year time gap. Hell, even Negan is starting to settle into Alexandria more, despite still being imprisoned, with Judith even consulting Negan for help with her math homework, providing a fairly cute scene that does a solid job of calling back to Negan’s eccentric surrogate parent relationship with Carl, back when Carl was alive. 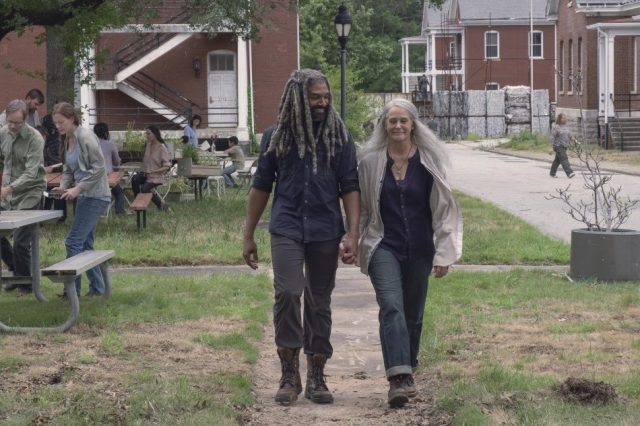 It was good to see that this episode focused on character drama, since we have a lot to catch up on after the lengthy time jump. That being said though, there were still a few more tense scenes, such as a brief moment of Magna appearing to be ready to attack Michonne in hopes of swaying the town’s vote (how will that help, exactly?), before reconsidering, and both Eugene and Rosita making a run to install a communications relay, in hopes of finding more survivors. This Eugene/Rosita subplot more or less served as a big fat tease for the first true appearance of the Whisperers, since it merely ends with Eugene being injured, and the two having to quickly hide before overhearing a herd of walkers start ‘talking’ to each other. As for the Magna conflict, it still ends with the survivors not being allowed to stay in Alexandria, but Michonne nonetheless decides to take them to The Hilltop, in hopes of them being allowed to stay there. This is a bit odd though, and mainly just feels like a forced way to connect back to The Hilltop after the events in Alexandria this week. If Michonne is comfortable letting the survivors stay at The Hilltop, a territory that is supposedly friendly with Alexandria, then why bother barring them from living in Alexandria? Magna’s group are clearly good, honest people, even considering the innate distrust that has to run through the walker apocalypse, so isn’t herding them over to Hilltop just effectively dumping the problem on someone else, even though there isn’t really a problem? See, this logic doesn’t totally track.

The Kingdom, meanwhile, had the smaller storyline this week, but it did give us a good chance to pick up with Carol and Ezekiel, who have now fully adopted a teenage Henry, and have since gotten married. Carol is now gentler and more outgoing, even taking Henry out to go meet up with Daryl for some unknown mission (sadly, a brief cameo towards the end is all we see of Daryl in this episode, suggesting that he’s since become a lone survivor that has since broken away from Alexandria), giving us a look at how Henry and Carol have both changed quite a lot over the past six years. Well, somewhat anyway. Henry is still a bit of a moron, since he stupidly runs off to tend to a screaming woman, clearly setting himself and Carol up to get robbed by former displaced Saviors, who are practically feral now, since Sanctuary apparently fell at some point in the six-year time gap. Carol seemingly allows Jed and Regina, along with the other Saviors, to rob her, trying to set a peaceful example for Henry… Only to later track the Saviors down and burn them alive for their robbery! Yikes! It was pretty intense to see just how violent Carol is still capable of being, even being a more outwardly gentle and loving ‘queen’ of The Kingdom now, with this horrifying scene also providing a convenient excuse to kill off Jed and Regina, the last remaining Savior lieutenants, now that Laura has joined Alexandria. Still, has Henry seriously not been trained to be more cautious than this? He’s supposed to be the son of the king, after all! 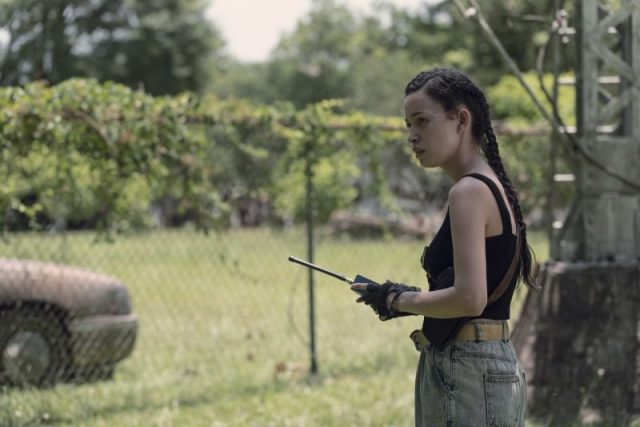 Beyond a few instances of strained logic to move the story along however, “Who Are You Now?” is nonetheless a pretty good first episode for The Walking Dead’s new post-Rick era. Magna’s new survivors are likable personalities, the evolution seen for both Alexandria and The Kingdom is pretty cool, and the first true glimpse of the Whisperers does end up being pretty memorable, even if it was largely given away in trailers already. Even with Rick being gone from the series now, it seems like the many other characters haven’t lost a step, finding themselves in new and interesting situations, while the young and optimistic Judith provides a fitting surrogate to the example set by both Rick and Carl, demonstrated nicely by her keeping a Rick-like ranger action figure by her side for much of the episode. Forced as it is, I’m hoping that the journey to Hilltop proves to be just as rewarding next week, and that Eugene and Rosita do a suitable job of continuing to set up this season’s major new villains. If the show plays its cards right, it may actually feel refreshed by having to lose Rick in the end, rather than hobbled.

The Walking Dead 9.6: "Who Are You Now?" Review
The Walking Dead manages a pretty good first post-Rick episode this week, laying out an interesting new world order after the six-year time jump.
THE GOOD STUFF
THE NOT-SO-GOOD STUFF
2018-11-12
83%Overall Score
Reader Rating: (0 Votes)
0%