Supergirl made use of a familiar, but slightly re-tooled threat to keep pushing the alien unrest conflict forward this week, as the treacherous Agent Jensen ended up taking on the identity of a classic Superman family foe. “Parasite Lost” quite aptly put Supergirl up against a new version of Parasite, after Jensen becomes infected with the Angon Worm that essentially serves as the Parasite creator of the Supergirl universe. Perhaps rather fittingly, we also learn in this episode that Jensen’s first name is, “Raymond.” Raymond Jensen was the first person to become Parasite in DC Comics lore, preceding the most well-known incarnation, Rudy Jones, who appeared on Supergirl as the first Parasite that Kara encountered, all the way back in Season One.

Making Jensen a new version of Parasite is actually a pretty solid idea, especially when it provides a handy device to create a super-powered underling of Agent Liberty that can handily absorb alien powers, while also conveniently killing the, “Roaches” of National City in the process. Kara of course can’t just directly stop Parasite either, resulting in the DEO having to take charge of rounding up Jensen under Alex’s watch, while Kara instead tries to attack the problem from another angle. Alex being the main force tasked with stopping this week’s major villain threat also provided a handy excuse to break her in under the purview of Colonel Haley, who starts taking an active role in providing additional oversight upon Alex’s DEO operations this week.

Alex had another very strong storyline in this episode too, thanks to Haley proving to be a surprisingly supportive and friendly ally. Alex initially expected the worst from Haley, but is pleasantly surprised to see that she works very well with her, to the point where even Brainy gets left out in the cold a bit! The two working like a well-oiled machine nicely led up to a tense climax with Parasite, wherein he ends up sealed in a force field dome with a huge group of civilians, while Alex has to neutralize him by any means necessary. Haley trying to write off civilian casualties led to the first brief bit of tension between Alex and her new superior, but Alex nonetheless convinces Jensen to give up his abilities and spare everyone, which also conveniently renders him brain-dead. Yes, this basically allowed Alex and the DEO to get off way too easily with the new Parasite, completely eliminating Jensen as a threat with a simple speech from Alex, which feels both cheap and unrealistic. Still, Alex learning soon afterwards that Colonel Haley dislikes aliens, and despises J’onn as the DEO’s former director, sets up some proper new conflicts for the two that should create some solid DEO storylines over the next few weeks especially, providing a tense line between Alex’s and Haley’s professional efficiency, and their differing politics.

Speaking of differing politics, James also got a pretty solid storyline this week, when he attends a political get-together with Lena, where he just so happens to bump into Ben Lockwood! Lockwood, now more publicly respectable with his newfound conservative, alien-scrutinizing internet platform, attempts to make peace with James and Lena, and ultimately makes a point to James to start embracing how he’s reaching scared, vulnerable humans as Guardian. This actually led to a decent revelation for James, wherein he realizes that Lockwood is actually correct, and James won’t improve alien sympathies in National City by immediately shutting out anyone who disagrees with him. This was another inspired way for Supergirl to scrutinize and re-examine its own considerably liberal political bias, and James starting a dialogue with the supposed antagonist of the show at this point, even if it seems like it’s about to strain his relationship with Lena, is a smart idea that should hopefully help give Supergirl more political depth than it can usually achieve.

Sadly though, we can’t quite realize that newfound political depth across the board this week. Kara and J’onn ended up saddled with a less effective storyline, which Kara especially ended up considerably dis-servicing. The two end up having to investigate an alien healer that has his power-regulating amulet stolen under unknown circumstances, leaving his life in danger. This is well and good on paper, but Kara’s solution to the problem is writing a blatantly biased CatCo article that predictably divides its readers. Worse still is that Kara acts surprised when she gets dissenters and people who criticize the article in the comments, with the other characters even going as far as to label anyone that disagrees with Kara (and James) a troll, even Lena, who really should know better than that! First of all, is this the first time that Kara has gotten a negative comment on an article?! She’s worked as a reporter at CatCo for years now! She should be used to it by this point! Second, declaring anyone who disagrees with Kara’s clear liberal politics a, “Troll” is both childish and reductive, and yet, the show still seems to portray Kara as a victim of conservative bullies here. Kara’s still coming off way too naive sometimes, and this is a clear example of that. If the show is going to persist with this character direction for Kara, especially at CatCo, then the supporting cast really needs to start pointing out that Kara’s heart is a lot bigger than her brain sometimes!

Kara’s article does manage to reach at least one citizen though, since she ends up making a girl that’s on the dying healer’s mind realize that her mother has been secretly hiding letters from the healer to her, since it turns out that the girl is half-alien, and the healer is her father. The mother being the actual culprit behind the rift between the healer and his daughter was actually kind of interesting, as was the mother being the one that was ultimately responsible for stealing the amulet and empowering Parasite, exploiting her personal connection to the healer. It’s just too bad that this decent story turn with this episode’s alien threat had to be stuck inside such a childish and unsatisfying Kara storyline, where it couldn’t really achieve its proper potential. Still, J’onn gaining a reputation as a private detective for aliens who can’t trust the NCPD proved to be a far better result of this reunion between father and daughter, providing a pretty clever excuse for J’onn to start moving closer to his comic book identity as a detective, with a distinct twist that more effectively roots him in the Supergirl universe. 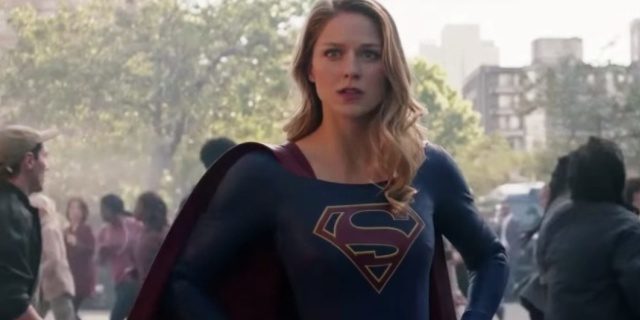 “Parasite Lost” is definitely a better Supergirl episode than what we got last week, even if it still has a couple of stubborn flaws. Kara sadly ended up being the weak link in this week’s episode, since she was stuck having to push mostly ineffective sentiment at CatCo, while the supporting characters were the ones actually getting things done. That said, it seems like the show is finding some strong new story paths for both Alex and James, who are facing more politically complex and intelligent threats than they’re used to, in Lockwood and Haley, respectively. J’onn finding his way to the path of the detective, a la Martian Manhunter’s civilian identity in DC Comics lore, is also very promising, especially since it provides another solution for struggling aliens who can’t realistically rely on Guardian, and who have smaller issues that are escaping the reach of Supergirl. It would have been nice if this show’s new Parasite didn’t go down like a moron though. It really feels like Supergirl wrote itself into a corner when it came to Alex’s confrontation with Jensen, which really ended up fizzling out with a whimper. Still, the strengthening of Agent Liberty’s political platform continues to grow in National City, proving that, if anything, the lack of oversight by Mercy and Otis has only made him more dangerous than ever now!