After Oliver finally got himself sent down to Level Two of Slabside for last week’s episode, we still didn’t ultimately learn who the mysterious ‘Demon’ that he was seeking out happens to be. This week, that question was finally answered. “The Demon” once again omitted the flash-forwards this week, since there was already plenty to chew on with the present-day supporting cast of Star City, with the entire Level Two storyline ultimately serving as the latest step in the story of Laurel, of all characters, even if the payoff to the mysterious Demon’s identity did end up being pretty cool, despite it raising more than a few questions.

So, who is The Demon? Well, for DC fans, or even observant Arrow fans alone, it should have been right there in the name! The Demon is not Dr. Parker, surprisingly (which still would have been a decent twist), but is actually Talia Al Ghul! This feels almost stupidly obvious if you think outside the box, since Talia is indeed the literal new ‘Demon’, because Ra’s Al Ghul is dead, and Nyssa has disowned her family. Talia somehow surviving the island-wide explosions of Lian Yu at the end of Season Five is already kind of a mystery (even if she does have some new facial scars to show for it), but there are bigger questions surrounding this reveal too, as cool as it is. If Talia is a woman, for example, how did she connect with Brick? Even considering that Level Two is apparently co-ed, and Slabside may very well have a female prison wing, it’s not like a female prisoner would logically be allowed to talk to a male prisoner, at least not on Level One. Did Talia somehow convince a guard to orchestrate this grand plan to lure Oliver down to Level Two, for the sole purpose of helping her escape? That’s a pretty big stretch. How does Diaz fit into all of this as well, or attacking Oliver in the shower for that matter? Talia’s plan, or Talia being The Demon in general, just doesn’t really hold up to scrutiny. Still, I did enjoy the sly comment that Talia was locked up at Slabside because of, “An old foe in Gotham”, teasing that the Al Ghul family has indeed run afoul of Batman in the Arrowverse more than once (or possibly Batwoman), off-screen.

Once you accept the head-scratching scenario of Talia somehow enacting a grand plan to get Oliver down to Level Two of Slabside however, the episode does present a pretty engaging story here. Oliver having to work together with one of Prometheus’ old cohorts alone, let alone one of his former masters from before he properly became the Green Arrow, is already tense enough, but it gets even more tense when Talia reminds Oliver that she’s still quite unhappy about Oliver murdering her father at the end of Season Three (Ra’s technically ‘killed’ Oliver first, in fairness), and that the mere act of asking for his help should prove how badly she wants to escape Slabside. The two do manage to enact a pretty cool plan as well, even taking out a whole hallway’s worth of riot guards along the way, in one of the coolest fight scenes that Arrow has delivered all season so far! Surprisingly though, once Oliver and Talia reach the morgue, the only place with a path out of the prison (heh, “The only way out of Level Two is through the morgue”), Oliver opts to stay behind, allowing Talia to escape and deliver key evidence against Level Two to Felicity. Oliver not wanting to be a fugitive is certainly noble, and seeing him reject escape in favour of not putting Felicity and William under any more scrutiny is certainly tough to watch, even if viewers could no doubt anticipate that Oliver wouldn’t be getting out of Slabside that easily, nor this soon.

The idea behind Level Two as an obstacle does deliver a bit of a cool connection with the outside work being done by Felicity and Laurel as well, who both manage to rope Dinah into investigating Level Two to boot, after Felicity finds that Oliver’s visitation privileges have mysteriously been revoked. It turns out that Dr. Parker is experimenting on the Level Two inmates in an effort to quell violent urges in less stable offenders, and Parker has targeted Oliver, believing that the Green Arrow is irredeemably violent. It’s actually a promising interpretive villain idea that the show disappointingly squanders and wraps up far too quickly, since Level Two is just completely shut down at the snap of a finger once Felicity gets Talia’s evidence (though she doesn’t ultimately know who delivered it to her, since Talia stays hidden), and Talia handily kills Dr. Parker before he can be arrested, immediately after Parker is fired. Well, so much for the whole Level Two thing. Like I said, it felt like this entire story arc was meant to dovetail into a new turn for Laurel, who is actually going to face one of her first big public cases now, when she decides to use the Level Two evidence to overturn Oliver’s conviction. That’s a bit promising, but Oliver just going back to Level One as if nothing happened feels quite disappointing, especially when it essentially leaves him with no apparent psychological fallout after the torture he endured in Level Two. 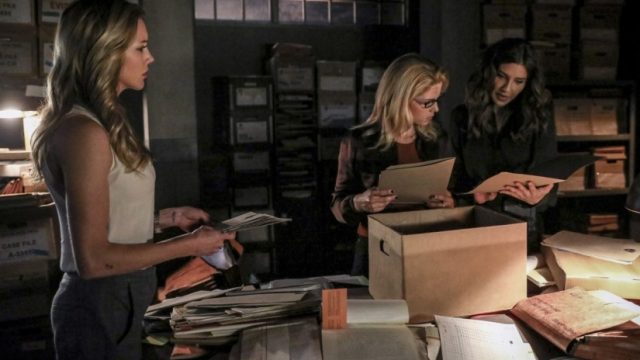 Aside from the core story work with Oliver and the women, we also get a subplot with Diggle and Curtis this week, as Curtis is coerced into joining Diggle on an undercover operation. Curtis is the only one both intelligent enough and fluent in enough languages to fool a terrorist into thinking that he’s some kind of chemical expert, and thus he becomes necessary to allow A.R.G.U.S. to move on their quarry, following the intel that Lyla got from pretending to ally with said terrorist. Curtis works well enough, but he quickly becomes skittish and refuses to see through the op, since he doesn’t want to be in the field anymore. After Diggle pokes into what’s on Curtis’ mind, Curtis simply declares that he’s lost his resolve to be in the field after Oliver’s arrest, and no longer wants to risk injury or death, even when it’s for the greater good.

This could have been another interesting idea, but it’s also one that Arrow sadly neglected to explore to its full potential. The idea that Oliver’s example served as the entire basis of at least one of the former vigilantes’ will to fight could have been something that did indeed create a compelling obstacle for another lead, whether for Felicity in her hunt for Diaz, or for Diggle in the duties of managing A.R.G.U.S. operations. Curtis is a logical fit for someone who would lose his fighting spirit as well, since he is a geek and a thinker at heart, and it sort of makes sense that it would be harder for him to be Mister Terrific, even in spirit, if he didn’t feel like he had a strong example to look toward. It’s just too bad that Diggle fixes this issue with a simple pep talk, a stubborn problem in The CW’s current run of DC shows, even if it does lead to Curtis being the MVP of the op when he handily takes out the terrorist that A.R.G.U.S. is after, while also discovering the next step in a conspiracy that may be brewing within A.R.G.U.S. itself. Could this be a way for Diggle and Curtis to both eventually be disillusioned with their work for A.R.G.U.S.? Hopefully, but I also hope that the show doesn’t make their inevitable revisiting of their vigilante identities quite as straightforward as that.

By the end of all of this drama, Felicity and Laurel manage to isolate the location of the Silencer, who has gone all the way to Moscow (somehow), to meet Diaz. Diaz has taken out a small army of Bratva enforcers too, and is currently holding Anatoli over a ledge, declaring that he’s about to fulfill an old promise! Looks like not even Anatoli will escape the wrath of Diaz, but we’ll have to wait until at least next week to see exactly what Diaz’s plans for Anatoli are. Regardless, “The Demon” wrapped up the Level Two story arc a bit too neatly, and the subplot with Diggle and Curtis didn’t really fit with everything else as well as it could have. Re-introducing Talia Al Ghul to Arrow is a cool idea, especially with the subtle tease that she may be providing a connection to Batwoman, in turn providing a handy way for Batwoman to link to at least the Green Arrow, once she’s properly integrated into the Arrowverse in the near future. Still, this week’s Arrow offering ended up feeling like a bit of a filler episode, ultimately scrapping most of the remaining story potential for Level Two in favour of setting up Laurel’s next big story conflict. Sure, that conflict will challenge the ruling of Oliver being in prison, but it still doesn’t feel like Oliver’s getting out of Slabside anytime soon, so if this is to be a decisive challenge for Laurel, it’s one that we’ll probably be forced to watch play out for possibly the rest of Season Seven’s front half, at least.