After taking last week off, following an especially strong episode a couple of weeks ago, The Flash seemed primed to keep delivering some strong momentum during its return this week. This somewhat happened, though the positive elements of the episode unfortunately had to be wrapped around another disappointing DC Comics villain portrayal. “All Doll’d Up” made a big show of introducing DC villain, Peter Merkel, a.k.a. Rag Doll to the Arrowverse this week, a long running Flash foe that dates all the way back to the Golden Age comics of Jay Garrick’s Flash from the 1940’s. What we ended up getting with the character’s Arrowverse portrayal here however was another simple thug, one that disappointingly lacks his quirky charm from other DC media. That’s even more annoying than the show’s usual botched weekly villains too, since this isn’t another C-list nobody from a few obscure pages of DC Comics lore in this case, but a well-established and long-running Flash family antagonist with decades of history behind him!

The central conflict with Rag Doll at least makes an attempt to tie itself into the ongoing drama with Iris and Nora, and to be fair, the shared emotional challenges of the West family, including Barry, did serve as the strongest element of The Flash this week. After Barry and Iris do some investigating and find out that Rag Doll’s mother is a cold and distant woman who has turned her back on her misfit son, on account of his criminal tendencies, Iris starts to wonder if that’s what she’ll eventually be to Nora in the future. For reference, Peter Merkel in this universe is another Central City citizen that ended up getting metahuman powers after being crushed by a piece of the DeVoe satellite during the Enlightenment, which gave him the ability to contort and re-shape his body, not unlike Ralph, only in a significantly more gross, unnatural fashion. The characters even point out the similarity to Ralph’s abilities through this take on Rag Doll, with Ralph ultimately being the one who captures him in the end, after Barry ends up incapacitated. 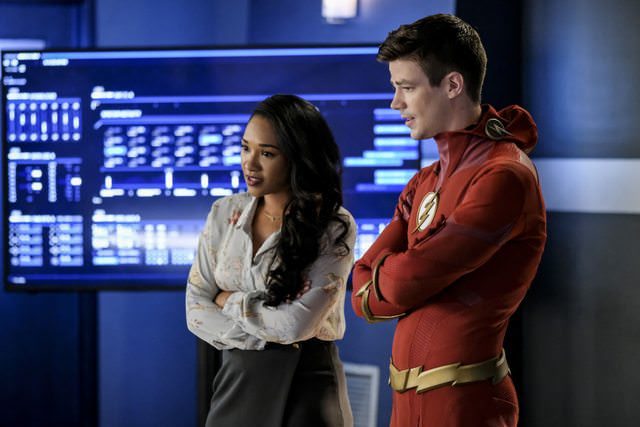 Barry being in peril and unable to call on Nora, or anyone else, for help made for an interesting climax on paper, since Rag Doll knocks him out and straps metahuman-dampening cuffs on him, coincidentally unaware that Barry is The Flash. This trouble for Barry is the byproduct of many ongoing story arcs, namely Nora still being angry with Iris and not checking her phone when Barry is in danger (another highlight moment for Nora’s early career as XS), and Cisco being unable to use most of his abilities after his hands were cut by Cicada’s dagger. This at least provided another welcome opportunity for Ralph to save the day, comically parodying Spider-Man with Iris as he stretches and swings around Central City like a doofus (boy, I bet someone at Marvel was at least a little tickled by this satirical display!), but the real defining moment was Iris diving off of a building after Barry when Rag Doll kicks him off, unlocking the cuffs before they both hit the pavement, so that Barry can break their fall with his speed! This awesome moment even justifiably impresses Nora, who starts deciding to work harder to mend fences with her mother. It’s just too bad that Rag Doll was ultimately defeated and captured by Ralph off-screen, who makes his own body a prison to contain Team Flash’s latest metahuman quarry. We really couldn’t see a contortion fight between Elongated Man and Rag Doll? Maybe the show’s limited budget wouldn’t allow it, but it still feels like a cop-out to have Rag Doll neutralized off-screen.

As I said, it was the West family’s shared drama that served as the big highlight on The Flash this week, compensating for the failings with Rag Doll to some extent. Joe being temporarily out of the show on account of Jesse L. Martin’s medical leave did somewhat hold this core story back from its potential, but Cecile nonetheless rose to the challenge of being the one to remind Nora to respect her mother, while also being the one to start inspiring Nora to see Iris in a different way. Cecile creatively telling stories about Barry, only to later reveal that the stories were actually about Iris, was actually a sweet moment that played with Nora’s expectations of her parents, while Nora trading chores to hear more stories about ‘Barry’ also provided equal doses of humour and heart. Likewise, Iris once again having to face the person that she apparently becomes in the future, and Barry having to remind her that she doesn’t have to be that person, once again does a good job of forcing Iris to re-examine her headstrong beliefs and values, and whether she had any right to dampen Nora’s powers in the future. Again, if the villain was better, we could have really played with the idea that Iris is comparing herself to a well-to-do woman who has a dysfunctional family connection that mirrors Iris’ own with Nora and Barry, but I guess that there just wasn’t enough room for that. 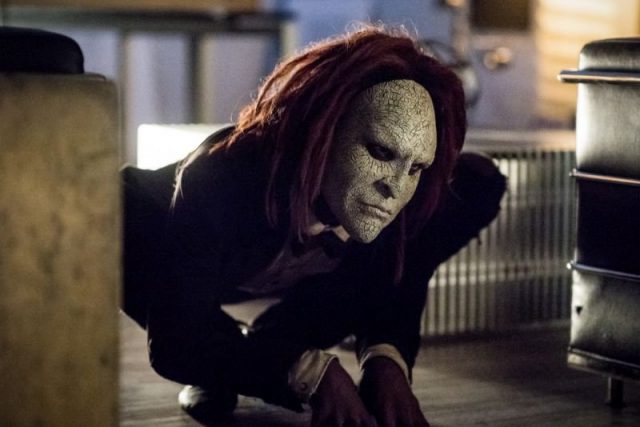 Speaking of not enough room, the investigation into Thomas Snow continues in a subplot this week, as Caitlin, Cisco, Ralph and Sherloque spend more time bumbling around, trying to discover where Caitlin’s father is hiding. There’s more hidden messages, more secret clues, more cold trails (if you’ll excuse the pun), and that’s it. This ongoing storyline with Caitlin’s father really feels like it’s spinning its wheels at this point, and mostly just served to highlight how Cisco can’t use his powers to their full extent after being injured by Cicada in this case. After Cisco tries to vibe objects and get closer to Thomas, he eventually gets a nosebleed and seizes up, leading to Caitlin discovering that his powers are more limited. That’s about all of the decisive information that we get from the investigation at this point, after it already felt like it was starting to waste too much time over the past couple of episodes.

It’s perhaps smart to not completely disable Vibe in the end, even if Cisco still has to stay undercover for now, and not make himself known around Central City, lest he paint a target on his back again. Limiting what Vibe can do may still create some interesting new challenges for Team Flash though, even if they’re balanced out by Cisco simply hacking into DeVoe’s other Enlightenment satellites, and hijacking them to use for S.T.A.R. Labs in scanning for dark matter again. Oh, come on! He didn’t figure that out before?! As much as the show seems to be conceding that Team Flash does need their satellites to start keeping an eye on the fresh batch of metahumans that the destruction of DeVoe’s hijacked satellite apparently created (I guess this includes good old-fashioned metahumans like Rag Doll as well, not just people with magical enhanced technology like Spin), why didn’t Cisco immediately assume that he could just take one of the other satellites that are just floating around space, not doing anything? This just kind of makes Cisco look like a moron, to be honest. Considering that the Arrowverse has clearly established that Cisco (and Felicity for that matter), can pretty much just appropriate whatever technology the plot demands on any given week, why did not just Cisco, but no one else ever put together that there are four, freakin’ four, abandoned DeVoe satellites that were just ripe for the taking?! I actually wondered this myself before the show took this turn, because Barry and Nora did only destroy one Enlightenment satellite to stop DeVoe’s plan at the end of last season, after all. 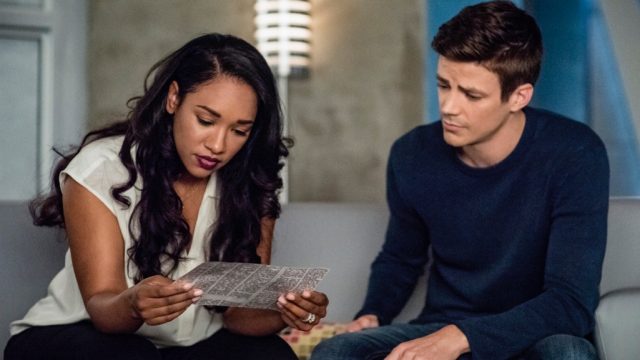 “All Doll’d Up” unfortunately ends up stumbling in a few too many places, making it a frustrating low note for Season Five of The Flash up to this point. I really hope that the show finds a more interesting storyline for Rag Doll in the future, because he really is one of the most unique and twisted Flash antagonists in the DC pantheon. Thankfully, he wasn’t killed during the climax, which would have definitely been the biggest insult after his simplistic use as another gimmick-based villain-of-the-week. As much as Rag Doll left plenty to be desired however, as did the increasingly tedious investigation into Thomas Snow (which is thankfully over soon, thanks to the new satellites), the West family drama at least encompassed the majority of the episode, and was overall done very well. Iris and Nora made some more great progress this week, and it’s great to see Cecile so effectively picking up the slack for Joe, whom we’re not going to see on the show at all for the next while, apparently. I for one am definitely looking forward to Caitlin just tracking down her father and being done with it though, and thankfully, it seems like that’s going to be the focal point of next week’s episode. Considering how much this investigation has just eaten up valuable subplot time lately, I certainly hope that the hunt for Caitlin’s father ends up being worth the wait, once we finally do meet him!

The Flash 5.5: "All Doll'd Up" Review
The Flash delivers strong emotional storytelling for the West family this week, but also frustratingly fumbles its introduction of another long-running DC villain.
THE GOOD STUFF
THE NOT-SO-GOOD STUFF
2018-11-14
67%Overall Score
Reader Rating: (0 Votes)
0%