The cause of the Inner Circle took another major step on The Gifted this week, as Reeva carries out her plan to bankrupt and obliterate the business of Creed Financial, the mutant-oppressing bank that Esme showed Lorna during last week’s episode. “no Mercy” was thus another Inner Circle-glorifying episode that once again saw the Mutant Underground on the losing side of the battle, while the Purifiers also prepare to take their own next major step from the perspective of human-based psychological warfare on mutants. It’s a good foundation for the show’s latest offering, though disappointingly, every story element outside of the Inner Circle did feel like it stalled this week, with the pacing slowing to a crawl before the big final shock that closes out the episode.

Things at least begin on a strong note, as we get another flashback-style cold open, this time centering around Reeva eight years beforehand, back when she was arguing for human welfare from within a local mutant community. This was clearly Reeva’s pre-Hellfire Club days, and much like Turner’s own flashback cold open from before, it helps to highlight how Reeva wasn’t always the menace to society that she currently is. Once Reeva watches a mutant friend of hers get stabbed while defending herself against a thug however, the episode proper begins, suggesting that Reeva herself also had a breaking point that eventually had her reject all of humankind, just as Turner eventually rejected all mutantkind. It’s enough to make you wish that the Inner Circle and the Purifiers had any connection to each other at this point, but even now, Reeva and Turner have yet to interact with each other, since Turner is still entirely too fixated on the Mutant Underground. 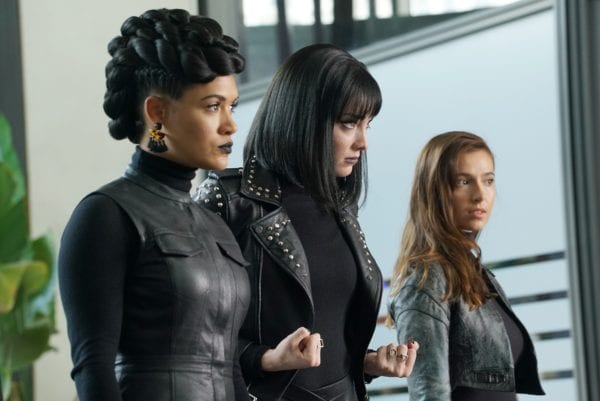 On the bright side however, the Purifier storyline did slightly improve this week, if for no other reason than Turner and his cronies finally stopped acting like out-of-control idiots for a change. This comes by way of Turner being summoned by a highly popular and influential mutant-critical television personality, Benedict Ryan, who gives Turner the opportunity to spread the Purifiers’ message while in turn condemning the failings of Sentinel Services on live television. Turner initially turns down the opportunity, logically finding himself unable to call out the people who formerly had his back and saw him through his government training. After Ted reminds Turner that he has nothing to lose however, Turner agrees to be on Ryan’s show, just in time for news about the Inner Circle’s big mission to reach the network. Well, that conflict was a bit pointless, to be blunt. Perhaps we’ll finally get a chance for Turner to start focusing more on the Inner Circle in this case though, since the Mutant Underground is so down on their luck lately that pursuing them over the Inner Circle probably isn’t even worth it at this point.

The Mutant Underground’s storyline this week was all about simply languishing in failure as well, which unfortunately had them taking a back seat to the episode’s other developments for the most part. All the Mutant Underground accomplished this week was a bunch of squabbling and impotent flailing, as they try to move Reed, whose powers are still going out of control, to a safer location. After deciding on the closed clinic that the Purifiers previously tossed, Reed simply gets moved there off-screen without consequence, and both John and Marcos are simply left to give Clarice the third degree about the Morlocks. This is frustrating though, since Clarice isn’t wrong when she claims that the Mutant Underground is really struggling, and they need all of the help they can get. Moreover, isn’t demonizing Clarice and questioning her loyalty only going to push her further under Erg’s influence? At least the Strucker family sets up some promise for later, when they finally appear to track down the old research assistant of Reed’s late father, but pretty much all of the Mutant Underground plots still entirely felt like a bust this week.

If you’re especially invested in the Inner Circle however, you at least get a fun core storyline with them, as the big heist against Creed Financial plays out. Turns out that Reeva’s mysterious ‘date’ is actually a manager at the bank, whom she has the Frost Sisters kidnap and stash at the headquarters. Reeva then has to talk the manager into helping out the Inner Circle by getting them into the bank’s networks, so they can empty out the ill-gotten profits of Creed Financial, which were largely taken from mutant oppression and usury. The manager still has feelings for Reeva however, and constantly tries to appeal to her humanity, hoping to help her realize that she doesn’t want to be a terrorist. This did nicely tie in with the episode’s cold open, where we see the kind of human-conscious person that Reeva used to be, and how ongoing negative sentiments between mutants and humans eventually led to that side of Reeva disappearing entirely. This is actually very cool to see, since Reeva has been such a mysterious character all season so far, so getting this extended look at her troubled humanity feels very welcome.

That said however, there’s just no arguing with some good old mutant-powered action, and thankfully, the Inner Circle helped to provide that with the actual heist at Creed Financial. Esme staying behind with Dawn is an interesting turn, further highlighting the precarious place that Lorna currently holds with the Inner Circle, and how Esme is becoming someone that Lorna perhaps trusts even more than Andy by this point, but seeing the various Inner Circle members stick it to the establishment was both cool and engaging. Even Sage finally bothered to show up for this operation (where has she been all season?!), helping to empty out the bank’s finances while Esme tried to calm baby Dawn down in the background, in a welcome bit of comic relief for what was otherwise a very heavy episode. Rebecca manages to open up the bank’s vault after a bit of difficulty as well, and by the end, it seems like Reeva’s efforts to cripple the bank without actual bloodshed go off without a hitch… Until Rebecca goes off-book and decides to kill all of the bank employees after they’re secured! This highly shocking and violent turn ends the episode, as even Reeva is horrified by what Rebecca has done, let alone Andy! The Inner Circle’s mutants are nonetheless forced to flee the impending police response however, just in time for a big episode on the Benedict Ryan show to keep exacerbating mutant hatred in the wake of Rebecca’s mass murder, I’m sure.

“no Mercy” isn’t quite as exciting as it probably should have been, with the Inner Circle completely carrying the episode in the end, while the other factions were simply left to languish around and ultimately accomplish very little. It felt like everything was designed to lead up to Rebecca making her more violent side known to the rest of the Inner Circle in the final seconds of the episode, which is a horrifying action that is bound to have massive consequences on all sides for the ongoing battle between mutants and humans. Even considering the entertaining Creed Financial heist however, both the Mutant Underground and the Purifiers could barely do more than drag their feet this week, even if the Purifiers at least settled down significantly, which did lead to some improved storytelling for Turner especially. Best of all though, we finally get some actual humanity and personal stakes for Reeva in this episode, who is finally made to be more than the all-powerful and all-knowing mastermind of the Inner Circle for the first time. This was nicely timed with Reeva finally seeing what can go wrong when she fails to account for her own people’s agendas as well. The Gifted is taking next week off, and won’t return until the Tuesday after next, but that’s certainly appropriate, since it will give viewers extra time to stew on how much trouble the Inner Circle is going to be in after what Rebecca did. Even someone as resourceful and intelligent as Reeva is going to have a tough time getting her faction out of this mess!

The Gifted 2.7: "no Mercy" Review
The Gifted stalled a bit this week, with both the Mutant Underground and the Purifiers largely just wasting time, though the Inner Circle fortunately picked up the slack with a fun and shocking bank heist.
THE GOOD STUFF
THE NOT-SO-GOOD STUFF
2018-11-14
70%Overall Score
Reader Rating: (0 Votes)
0%