NOTE: Full spoilers for this episode of, “Black Lightning”, including a potential character death, are present in this review

Black Lightning may have sat out last week, but it seems like it was preparing a pretty big gut punch for the viewership after its return this week! “The Book of Blood: Chapter One: Requiem” hits the ground running right from the get-go after Gambi finds himself being targeted by mysterious gunmen. After appearing to have the means to escape, Gambi nonetheless gets cornered, and his SUV flips off of the road and explodes in a burst of flames! The Freeland P.D. quickly come to the conclusion that Gambi died in the crash as well, with Henderson delivering the difficult news to Jefferson and his family.

This presents something of an interpretive new device for the Pierce family’s ongoing drama, not to mention an especially big blow to the continued professional degradation of Jefferson as both one of Freeland’s most beloved citizens, and as its vigilante hero. Jefferson refuses to believe that Gambi has died, and it’s difficult to argue with Jefferson’s years of knowing that Gambi has, “Contingency plans for his contingency plans”, which has included cheating death in a high-profile fashion before. Eventually, even Jefferson starts to begrudgingly accept the reality that Gambi may be well and truly gone however, even getting drunk and punching out an unruly customer at one of Freeland’s local bars, before suiting up as Black Lightning to try and vainly get hopeful information out of Two-Bits. This merely ends with Jefferson eventually finding his way into Gambi’s shop and collapsing into Anissa’s arms, exhausted at being unable to prove that his ally and friend is in fact still alive somewhere. This really was a heartbreaking moment, as even the viewer’s confidence in Gambi’s survival nicely ebbs away by the end of the episode. The show did a great job of actually not tipping its hand here as well, leaving the fate of Gambi still in question by the time the episode is over.

Speaking of Anissa, she’s also deeply affected by the supposed loss of Gambi this week, which compels her to seek out the comforting arms of Grace. Anissa and Grace end up having sex, but Grace wakes up the next morning insisting that Anissa stay away from her, since Anissa is unable to commit to not hurting Grace once again. The whole forced obstacle separating Anissa and Grace, namely Anissa’s musician fling, still doesn’t really feel logical or rewarding as a plot device, but there’s no time to really think about that too hard, as Grace soon after starts forcing down medication, after mysterious spots begin to grow all over her body! Seems like Grace is pushing Anissa away because she’s actually an undercover metahuman, which ironically gives the two women more in common than they realize! Grace happens to have metahuman abilities in DC Comics lore as well, so it will be interesting to see how long it takes for Anissa to inevitably discover the source of Grace’s torment, especially since I imagine that the series will keep finding ways to push these two star-crossed lovers together.

Jennifer also struggles with the loss of Gambi in another inspired way, as Jefferson becomes more distant, and Jennifer continues to struggle with being stuck at home, while also being unable to master her abilities. Her secret interactions with Khalil once again get spotlighted here, in a pretty great flashback scene that shows the two reminiscing about their former lives, and how they can move forward in the present. The two even become nostalgic about things that they used to hate about their time at Garfield High, though they still end up forced apart in the end, when Jennifer decides to start ghosting Khalil, despite his incessant texts. Khalil is still spending the entire episode getting pushed around by Tobias Whale outside of his equally impotent attempts to contact Jennifer, meanwhile, and for all of his threats and posturing about killing Khalil if he steps out of line, Tobias really hasn’t committed to the idea, even now. Frankly, Tobias is still doing a lot of grandstanding while not actually accomplishing much at all so far this season. Sure, he does blackmail a city councilman in this episode, but that hasn’t yet gone anywhere, beyond continuing to claim to Freeland that Tobias is awesome, without any action to truly back that up. As much as the drama with the good guys on the show is still a highlight this season, Black Lightning is once again failing to pick up the pace with its superhero element, particularly with Tobias and his villainous agenda, despite seeming to remedy that in the previous episode especially.

Fortunately, we still got to check in with the pod children in yet another subplot with Lynn, who feels like the one Pierce family member that is somewhat removed from the grief over Gambi. Lynn does try to start thinking about early arrangements for a funeral service, despite Jefferson resisting the idea, but this quickly gives way to Lynn resuming her pod children work with the ASA by the episode’s second half. Lynn is struggling to come up with a vaccine to save everyone in the pods, but Dr. Jace claims that only half of the pod children can be saved, no matter what. Lynn seems to be on the verge of proving her wrong soon afterward, which even Dr. Jace concedes, until Lynn’s proposed vaccine merely saves half of the pod children, and kills the rest. It turns out that Dr. Jace lied to Lynn in order to just get the experiment going, in turn saving half of the pod children’s lives, as she initially predicted. Lynn has a predictably hostile reaction to this outcome, demanding that Dr. Jace be hauled off in response, but perhaps Lynn’s struggles really were in vain. Seeing Lynn find a different way to struggle against the inevitable provides a good way to have her conflict mirror that of Jefferson, with Lynn throwing herself into her work in response to the news about Gambi, only to find that she can’t really do anything about her own grim circumstances either. Dr. Jace isn’t wrong when she says that half of the pod children surviving is better than none, but it was still hard to watch all of Lynn’s efforts essentially amount to nothing, with Dr. Jace’s nihilistic findings ultimately winning out.

The closest thing we got to a slightly hopeful outcome came from Anissa, even after she had her turbulent intimate encounter with Grace this week, since Anissa decides to take up a volunteer position at the now-understaffed clinic that she and Jefferson saved as Black Lightning and Thunder in the previous episode. After assisting with a pregnant teen and her confrontational boyfriend, Anissa sees the boyfriend stumble back into the clinic, injured with some sort of liquid metal in his face. The boy then dies on the floor, with Anissa merely managing to learn that the mysterious incident is related somehow to South Freeland, a part of the city that Black Lightning hasn’t yet truly explored. Anissa takes off for South Freeland, and is pulled over along the way, only to see that the cop who pulled her over appears to have liquid metal-esque metahuman traits, leading to her speeding off as the episode ends! What the hell is South Freeland, in this case?! As happy as I am that this could lead into a more superhero-heavy episode of Black Lightning next week, which the show could use a bit more focus on this season, is this really the time for Anissa to be going further into danger without backup?! 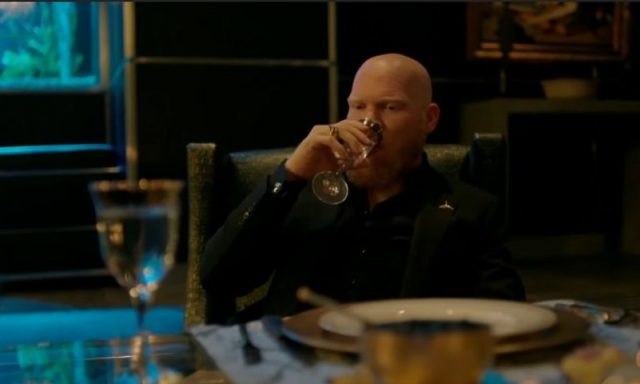 Even though the villains are still not nearly active enough in Freeland at this point however, “The Book of Blood: Chapter One: Requiem” nonetheless ended up excelling as a high note for Black Lightning’s second season. The superhero element of the show was once again pushed into the background this week, but the heavy focus on more strong and compelling drama with the Pierce family still elevated the episode very well, as each Pierce family member experiences separate responses to the alleged death of Gambi. The fact that Gambi’s possible death wasn’t resolved one way or the other by the end of the episode is also plenty intriguing, since we’re not really sure which perspective is correct, nor whether the Pierce family really does have to let Gambi go in the end. Those struggles with Gambi weren’t the only strong obstacle this week either, since Lynn’s efforts still lost her half of the pod children, while Anissa once again found herself pushed away by Grace, after seeming to finally find comfort in a more steady companion. I don’t mind the prospect of more comic book-inspired elements taking the focus next week, as Anissa appears to be speeding into the lions’ den of South Freeland, which appears to have its own significant metahuman problem, but the more human drama shared between Black Lightning’s leads found at least one week to really soar, as a new ‘book’ of storytelling begins. Hopefully the other side of the series can keep that momentum going strong in South Freeland next week!