We’ve come to the end of the line for The Walking Dead’s 2018 run of episodes, and despite the other story elements that are presented in this week’s midseason finale, it’s clear that any viewers continuing to stick by AMC’s post-apocalyptic drama are here for one reason and one reason only; To see the first proper battle against the Whisperers. To that end, “Evolution” does deliver, providing a nicely shocking introduction to the show’s latest villains that are set to menace the survivor communities. You still have to slog through some dull filler to get there, but the final turn of this midseason finale still makes the wait worth it, as these new foes quickly make a solid impression on the viewers and the characters alike.

Naturally, a big part of this episode involves Aaron and Jesus teaming up with Daryl to try and rescue Eugene, who is still stashed at some random barn. During their mission however, they start to observe irregular herd activity, with walkers milling around in a circle, and taking unnatural routes that they shouldn’t be moving on. The survivors don’t spend too much time thinking about that though, because the real priority is Eugene. Granted, everyone does manage to reach Eugene, who is alive and as well as he can be after his injury, but Eugene quickly points out that he and Rosita observed the same supposed ‘walker evolution’, hinting that the undead are about to become a lot more dangerous! As you can imagine though, Aaron, Jesus and Daryl all have a hard time believing that walkers have suddenly learned to speak and strategize.

It’s a shame that the show had to so quickly bring up and dismiss the ‘walker evolution’ theory, since the survivors learn about the existence of the Whisperers, and their true nature as living humans that simply disguise themselves as walkers, all within this episode. It would have been cool to have the communities trying to repair relations and formulate new partnerships, through simply believing that the undead are now less predictable and more advanced, before everyone discovers what they’re really up against. Sadly though, we don’t really get that. Instead, a lot of this midseason finale is actually filled out with subplots surrounding Henry at Hilltop, and Gabriel, who is currently in charge of looking after Negan in Alexandria.

The Henry subplot is definitely the better of the two, since we see Henry quickly fall in with a mischievous crowd of teens at Hilltop, who encourage him to sneak out and drink booze. The teens even show Henry a walker that they’ve trapped in a pit for target practice, but Henry takes it upon himself to kill the walker, which leads to him being sealed outside of Hilltop. Henry has to beg to get back in, and this of course lands him in jail, just in time to have his troublemaking discovered by Earl, his new boss. This led to one of the best scenes of the episode that didn’t involve the Whisperers, as Earl faces down Henry being in his former position in the drunk tank, highlighting how Earl now has a chance to atone for his own mistakes in the past, by making sure that Henry doesn’t wind up making those same mistakes. Not only that, but Henry’s desire to unplug and get away from his high-pressure duties to The Kingdom is relatable and valid for a teenager his age, since it’s easy to forget that Henry has had to grow up very fast. We don’t see what exactly comes of Earl agreeing to give Henry a second chance yet, but it’s nice to see that Earl is already stepping up as a surrogate father figure, now that Henry has had to leave Carol and Ezekiel back at his former home.

The Gabriel/Negan subplot however is more of a dud, simply serving to take up space in a midseason finale that feels like its focus should be elsewhere. Gabriel trying to reach the person underneath Negan’s bravado through meditation and spiritual healing is kind of interesting, especially when he ends up losing his cool after Negan speaks out of turn about Rosita, not knowing that Rosita is injured at Hilltop. Again though, nothing meaningful really comes of this. This entire subplot simply exists to finally get Negan out of prison, and the way that this happens is pretty damn stupid. I get that there’s no logical or believable way to get Negan out of prison and out of Alexandria, but the show could have at least tried to have Negan play Gabriel and take advantage of his trust, especially now that Gabriel is vulnerable through his worry over Rosita. Instead, Negan literally just walks out and disappears, after Gabriel is stupid enough to leave the prison door unlocked. Oh, bullshit! Even considering that Gabriel is distraught over Rosita, there’s no way that he, or anyone, would be stupid enough to not double-check the cell door on the way out, especially not when it’s Negan we’re dealing with! As much as the Whisperers are a pressing issue, I really can’t wait to see just how pissed everyone is when they discover that Negan has escaped, especially for such a stupid reason!

Still, I suppose that viewers aren’t going to dwell on Negan’s ridiculous escape, since it’s quickly overshadowed by Aaron, Jesus, Daryl and Eugene being beset by a herd of walkers, who naturally didn’t move in the direction that everyone predicted! The four end up being cornered in a foggy graveyard, taking out most of the walkers, and surviving long enough for Michonne, Yumiko and Magna to show up and help them get through a sealed gate. Jesus stays a bit longer to take out some of the remaining walkers however, and seems to be handling himself just fine… Until a walker ducks under his sword and stabs him in the back! Jesus hears the walker whisper that he’s not supposed to be there before collapsing to the ground, and this leads to the others coming out to start striking down the ‘whispering’ walkers, ultimately peeling off one of their faces to see that a recently-living human face is under it! Finally, the nature of the Whisperers is revealed, just a bit too late, since Jesus quickly dies from his injuries, leaving the others surrounded by more Whisperers as the episode ends. That’s quite the cliffhanger to cap off The Walking Dead’s 2018 episodes on! 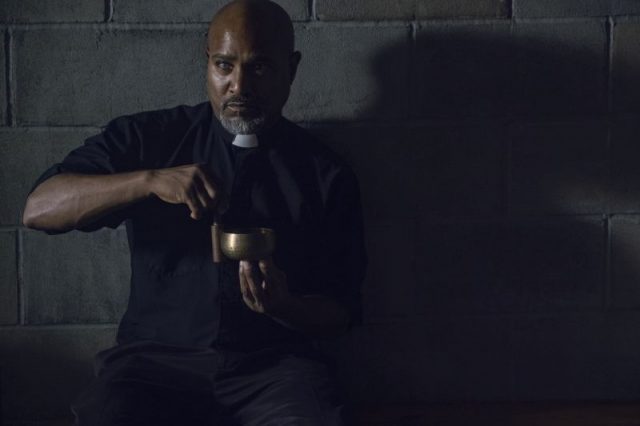 The shocking, unexpected death of Jesus served as the crescendo of a midseason finale that took its time and eventually delivered the goods, particularly since Jesus is still very much alive in the Walking Dead comics at this point. Not only does Jesus’ death eliminate one of Hilltop’s best fighters, along with the person everyone was hoping would lead Hilltop in Maggie’s stead (I guess that duty falls on Tara’s shoulders now?), but it also tragically comes after the implied hint of romance between Jesus and Aaron on the show, spurred by Jesus being revealed as gay in the source comics, though I suppose Jesus’ sexuality was ultimately never definitively revealed in the TV series, so who knows. We may have had to slog through some slower, less effective story beats in, “Evolution”, but the payoff certainly provided just the right mix of tragedy, fear and shock to send The Walking Dead’s 2018 run off on a good note. This will give viewers plenty to stew over before Season Nine returns for its back half in February 2019, especially since Alexandria isn’t any better off than Hilltop or The Kingdom at this point, now that they’ve failed to keep Negan contained!