Legends of Tomorrow may be skipping out on The CW’s traditional DC TV crossover this year, but this also potentially frees it up from a narrative standpoint, allowing the show to set up next week’s midseason finale with far more outrageous, history-altering consequences! “Hell No, Dolly!” begins as just another vaguely tongue-in-cheek Fugitive hunt, as the Legends travel to New Orleans, 1856 to investigate the sudden shift of New Orleans priestess, Marie Laveau from celebrated mystic to convicted serial killer. It turns out that Laveau also has an entirely unrelated connection to Constantine to boot, as her descendant in 2018 ends up becoming a lover of Constantine’s that he somehow ended up betraying.

Appropriately then, it’s Constantine that ended up being the biggest draw on Legends of Tomorrow this week. Constantine’s story arc easily overtook every other story development in this episode, finally bringing into focus just what kind of threat the Legends will likely be up against by the end of the current season. Every other story development either felt like filler, or simply existed to start setting up future developments in Season Four’s back half, particularly a Time Bureau subplot with Mona, who finds herself in the middle of a wacky misunderstanding started by Nate and Gary. This all leads to an episode that is mostly decent, but definitely anchored entirely by Constantine, with everything else often feeling disappointingly disposable this week.

This week’s Fugitive at least continues to lend itself to some solid humour however, as the Legends find themselves pursuing a Dybbuk, a malevolent spirit from Jewish folklore that, in the case of the Arrowverse, is able to possess dolls, Chucky-style. The Child’s Play references come thick and fast throughout the episode, so fans of that horror movie franchise especially are bound to get a kick out of the foul-mouthed, unhinged Dybbuk, even if FCC censorship regulations obviously prevent the spirit from going all-out with its cursing. The Dybbuk initially appears to be defeated fairly easily, after a brief confrontation with Ray and Sara, but despite Mick torching the original vessel that the spirit used, it quickly goes free, possessing the left over Martin Stein puppet that was brought to the Waverider by Leo Snart! This is exactly the kind of surprise Stein return that the Legends no doubt never wanted to see!

While Sara, Ray, Ava and Mick have their hands full with the Dybbuk on the Waverider, Constantine creates a whole other issue, after Laveau demands answers for what happened to her descendant. It turns out that said descendant, Dez, one of the only lovers that Constantine was ever that serious about, ended up being dragged to Hell due to some sort of action by Constantine, and Constantine wants to undo the damage, using the Legends’ resources. Constantine thus strikes up a deal with Charlie, the other least loyal member of the team, to try and make sure that he and Dez never meet, thus saving Dez from his terrible fate, and in turn preventing Constantine from joining the Legends, which will also restore Charlie’s shapeshifting powers. This is a great story hook, and easily the strongest element of the episode, particularly in how well it ends up leading into next week’s midseason finale. The only part that I didn’t buy is the fact that Charlie can somehow start resisting Constantine’s power-dampening spell, yet this somehow motivates her to change history. Well, can Charlie power through the spell or not? Why bother pretending that the spell is unbreakable if Charlie could feasibly overpower it with enough time and focus?

We also end up finally getting answers as to who, or what is pursuing Constantine this week, which turns out to be the same demon that had Dez damned in the first place. Unlike Mallus, who was completely made up for Legends of Tomorrow and doesn’t exist in DC Comics lore, this time the show is bringing in a recognizable DC Universe demon, namely Neron. Neron is one of the most powerful and dangerous demons in the DC Universe, one that loves to make Faustian bargains with mortals to attain souls, which are the currency of Hell, and the key to Neron’s power. Since Neron somehow came upon the deed to Constantine’s soul in the Arrowverse, Constantine inevitably provokes him, leading to Dez binding his soul to Neron’s in an effort to save Constantine’s life. Constantine responded to this emotional turn by sending Dez, as Neron, to Hell. This sets up a pretty promising villain conflict for the back half of Season Four, as the Legends must not only face a very powerful arch-demon, but also Constantine’s greatest failure… I mean, aside from the little girl he got damned in Newcastle. Boy, Constantine has a real accidental damning problem, doesn’t he?

Outside of this effective and emotional arc with Constantine, the rest of the episode, like I said, mainly just feels stuffed with filler. Sara’s efforts to try and force Mick and Ava to get along, after Ava confiscates the Diary of Brigid from, “Tagumo Attacks!!!” a couple of weeks ago, ultimately goes nowhere, and just feels like a waste of time. Likewise, Ray growing a goofy moustache in a feeble effort to impress Nora feels similarly pointless, even after the Dybbuk inadvertently ends up leading to Ray accidentally shaving off half of his new facial hair. There’s also a larger subplot with Mona, like I said, wherein Gary tries to get Nate to communicate his crush on Mona for him, only to have Mona mistake this for Nate authorizing a romantic relationship between Mona and her actual crush, the Kaupe. When Mona sees the Kaupe get snatched on an unscheduled visit however, she tries to save him, only to get accidentally scratched in a fit of rage, before the Kaupe escapes the Time Bureau. This is no doubt related to the mysterious ‘Project Hades’ that Hank is secretly carrying out, with the Kaupe probably being Hank’s latest desired subject for it. Considering that the Kaupe is basically a werewolf in all but name in the Arrowverse as well, does this mean that Mona will end up getting werewolf abilities from her injury? It’s an interesting idea, but it would have worked best if the show wasn’t very transparently shoving Mona down a certain story path, with any other development with her character beyond this Kaupe injury ultimately being pushed aside in an awkward way by the end of the episode. 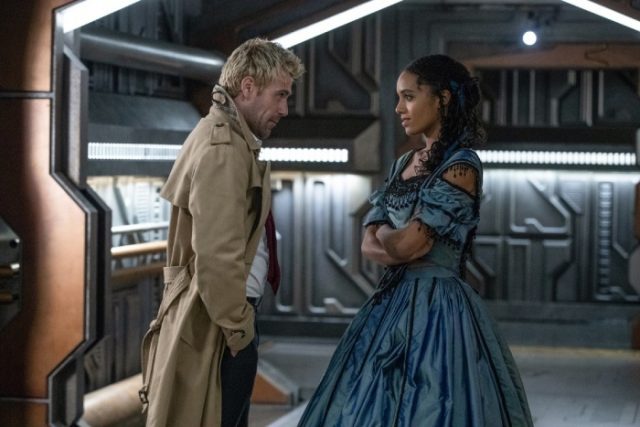 Things are certainly a mess on the Waverider and at the Time Bureau by this point, but both of those incidents are soon the least of everyone’s problems, after Constantine successfully drives off Dez in the past, breaking a fixed point in time, and causing a catastrophic rupture of reality! We’ve already seen what can happen with this sort of thing during the whole Spear of Destiny pursuit in Season Two, so I imagine that we’ll have a very eccentric and unpredictable midseason finale to look forward to next week, especially when the episode ends with Charlie, now back in possession of her shapeshifting powers, discovering that Zari has been transformed into a cat!

At least next week’s midseason finale should be pretty entertaining, but it sucks that, “Hell No, Dolly!” couldn’t really make the most of any of its story ideas, outside of the core conflict with Constantine. It’s great to finally learn just who exactly is threatening to come for Constantine, especially when Neron is so tragically connected to one of the only people that Constantine ever grew to truly care for, but everything else on this week’s Legends of Tomorrow offering just feels like small potatoes, especially with the episode ending on a full reality shift. The Legends don’t even manage to truly stop the Dybbuk in the end, so that may very well still be an issue next week to boot! This week’s episode is still entertaining enough to get by, but there’s just no disguising the fact that this is a blatant filler episode, making it a bit of a moot point that Legends of Tomorrow doesn’t have to accommodate next week’s annual DC TV crossover event this year.

Legends of Tomorrow 4.7: "Hell No, Dolly!" Review
Legends of Tomorrow provides a strong new story hook for Constantine this week, but at the expense of a fairly unremarkable lead-in to next week's midseason finale on every other note.
THE GOOD STUFF
THE NOT-SO-GOOD STUFF
2018-12-05
74%Overall Score
Reader Rating: (0 Votes)
0%