After a satisfactory, but underwhelming 100th episode last week, The Flash could at least look forward to another of The CW’s frequently awesome crossover events the following week, before it goes off the air until mid-January. Interestingly, The Flash is also temporarily swapping timeslots with Supergirl for this week, so it can serve as the kick-off to said crossover! Granted, us Canadians get a little screwed over with the crossover’s distribution because of this, since, unless your cable box is tapped into American CW feeds, the second part of the ‘Elseworlds’ crossover, the one hosted on Arrow, will now air a day earlier than the first part on The Flash, which won’t hit Canadian Netflix platforms until some point on Tuesday, before the third and final part airs on Supergirl during Tuesday night. Not only does this mean that the Elseworlds event is releasing out of order in Canada, but it also forces Canadians to jump between the Space Channel for Arrow, Netflix for The Flash, and then Showcase for Supergirl, in order to take in the entire event. It’s a mess, frankly, but on the bright side, at least the Elseworlds event is off to a pretty solid start on this week’s episode of The Flash, even if it doesn’t quite hit the ground running at the same rate that, “Invasion!”, and, “Crisis on Earth-X” did over the past couple of years.

Things begin with an immediately shocking hook (after that played-out Earth-90 teaser kicks off this episode yet again), as Oliver wakes up in Barry’s bed, and is greeted by breakfast from Iris, who happily kisses him and embraces him as her husband. At the same time, Barry gains consciousness in the middle of a sparring match with Diggle at Star City’s A.R.G.U.S. branch. The two heroes appear to have switched identities all of a sudden, with Oliver now possessing Barry’s speed and duties as The Flash, while Barry now possesses the incredible fighting and archery skills of the Green Arrow! Despite everything else being the same, both Oliver and Barry have to quickly try and adapt to the responsibilities of the other hero, while their allies don’t appear to believe that they have swapped identities. Well, it’s primarily Team Flash that doesn’t believe them, in fairness. Only Diggle is featured among the Team Arrow side in this particular episode, somewhat conspicuously. Why did no one else among the Arrow cast get to react to Barry having switched identities with Oliver? That’s kind of a waste. 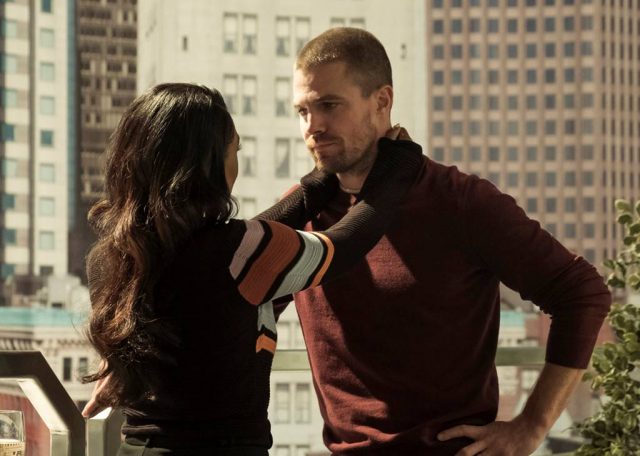 Even if there’s more of an air of mystery and intrigue in Elseworlds, compared to The CW’s previous two action-driven DC TV crossovers especially, this year’s first crossover offering definitely excels in terms of character and humour, as Barry and Oliver face a Freaky Friday-style situation that forces them to try and appreciate the motivations and challenges behind the other hero. The two being the only ones aware that something is wrong with reality (the red skies and giant lightning weren’t a clue to anyone else?), also results in a tense, but amusing team-up between the two, which piles on the self-referential jokes and callbacks, much to the inevitable delight of Arrowverse fans. We even finally figure out where the toilets are in the pipeline prisons, for what that’s worth, after Team Flash decides to throw both Barry and Oliver in the pipeline, which feels like a bit of an overreaction to say the least, but at least it gives Barry and Oliver the inspiration to try and visit the Supergirl universe, to see if things have been affected on Earth-38.

One very cool Smallville callback later (please bring Smallville into The CW’s DC Multiverse!), and both Barry and Oliver convince Iris to give them an Extrapolator, which allows them to appear in front of a very surprised Lois Lane on Earth-38, who is hanging out with Kara and Clark at Clark’s Smallville farmhouse. Luckily, Earth-38 is indeed unaffected by the sudden reality shift that’s taken place on Earth-1, leading to Kara, Clark and Lois to derive more amusement from Barry’s and Oliver’s unfortunate situation. There’s more great character moments here, particularly when the show gets to flip around the famous first training session between Barry and Oliver from all the way back during The Flash’s first season, which is also complemented by some very heartfelt bonding sessions between Kara, Clark and Lois. This turn in Smallville also leads into our first action-packed heroic team-up of this year’s CW crossover, when Cisco breaches to Earth-38 in order to tell the mismatched Barry and Oliver that a metahuman-copying robot called Amazo is currently running loose in Central City! This was a fantastic surprise, since Amazo’s creator, Professor Ivo has already appeared and been killed off during Arrow’s Season Two flashbacks (unless the real Professor Ivo of the Arrowverse is the late Anthony Ivo’s brother? Or something?), though apparently Ivo Labs somehow survived, and still built their infamous metahuman-copying android from DC Comics lore. 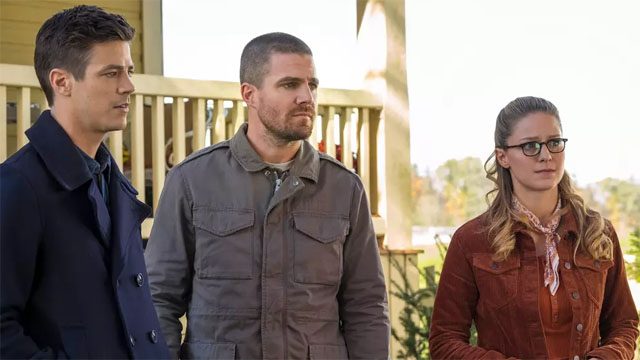 The climactic battle against Amazo is pretty, ahem, amazing as well, no doubt stretching the better part of The CW’s 2018 budget in order to accommodate it. Supergirl and Superman also joining up with the swapped Flash and Green Arrow only made the battle even better, as Amazo quickly becomes more dangerous by copying the Superman family’s powers, on top of the Flash’s and Green Arrow’s abilities (how exactly can it copy the Green Arrow if Oliver isn’t a metahuman?), with Barry having to fire one well-placed arrow to load the android up with a virus and finally destroy it! There is room for an eventual return from Amazo in the future, since its pieces are recovered and scattered apart (with Cisco conspicuously keeping one as a souvenir), before Cisco soon after tells everyone that he’s been vibing a mysterious man with mutton chops, who appears to be connected to the reality shift. After the heroes notice the Wayne Enterprises building in the background of Oliver sketching out Cisco’s vibe, with Barry’s speed, the episode ends with everyone agreeing to take a trip to Gotham City! Yes, at long last, the Arrowverse is heading to the Batman family’s stomping grounds, after Gotham City has been off-limits to The CW’s DC shows before this point, with Batwoman shown overlooking the city in this episode’s closing seconds!

There’s obviously no shortage of entertainment value throughout this first chapter of The CW’s Elseworlds crossover, which blended nicely with some standout character work, and especially great humour. This winning combination also provided a much-needed win for The Flash, which seems to be struggling the most out of The CW’s current roster of DC dramas, despite its continued high viewership. Not every moment was perfect however, especially since some of the character decisions were pretty questionable at times. Like I said, why exactly were Barry and Oliver thrown in the pipeline by Team Flash? It’s not like they were being hostile! Moreover, why did Ivo Labs leave a fully-activated, berserk metahuman-hunting android just lying around a random warehouse, waiting to be accidentally activated during a Flash fight? It also felt like Oliver had to master Barry’s many Flash abilities unrealistically quickly, for want of moving the story along at a worthy pace. Seriously, how slow a learner is Barry, considering that Wally, Nora, Iris and Oliver alike all seem to have a much easier time working with his abilities than he does?! Actually, where was Nora during this crossover episode anyway? Felicity’s absence in this episode is also pretty conspicuous, especially when it leaves a missed joke opportunity on the table, after Barry is naturally unhappy about Oliver waking up in bed with his wife!

I imagine that Arrow and Supergirl will probably have the better Elseworlds episodes this year, even if the Amazo fight that caps off The Flash’s crossover offering delivers some of that kick-ass momentum that the rest of this first Elseworlds episode doesn’t totally have. Like I said, the focus seems to be more on intrigue and humour for this first Elseworlds chapter, though even this mystery is disturbed a bit, since we already know who the culprits behind the reality shift are, right from the get-go. Those holding their breath for the debut of Batwoman might also be disappointed that, “Elseworlds, Part 1” doesn’t bring The CW’s team of DC heroes to Gotham City at all, leaving this development to no doubt unfold in the subsequent crossover episodes that are set to air on Arrow and Supergirl this week. Overall, “Elseworlds, Part 1” nonetheless remains one of the best episodes of The Flash that we’ve gotten so far this season, even if there are some things to pick apart. A couple of unrealistic character decisions and baffling character absences aren’t ultimately enough to distract from another highly entertaining crossover offering though, one that I imagine will just keep getting better over the next couple of days!

The Flash 5.9: "Elseworlds, Part 1" Crossover Review
The Flash kicks off this year's Elseworlds crossover event on a very entertaining note this week, even if it seems apparent that this crossover's best moments are still ahead of it.
THE GOOD STUFF
THE NOT-SO-GOOD STUFF
2018-12-10
85%Overall Score
Reader Rating: (0 Votes)
0%