The Flash certainly had plenty of fun with the stakes behind this year’s ‘Elseworlds’ crossover, which is being shared between three of The CW’s five current DC dramas (Legends of Tomorrow is sadly sitting out this year’s crossover, while Black Lightning still hasn’t yet connected itself to the network’s other DC shows in any way), and now that the foundation has been laid for what’s ailing the Arrowverse during this year’s superhero team-up, we can really crank up the thrills with the crossover’s second chapter on Arrow! “Elseworlds, Part 2” focused more heavily on action, though the real draw of the episode is one that DC fans have been anticipating since it was confirmed to be in the works; The Arrowverse’s heroes are finally going to Gotham City, the home of Batman!

“Elseworlds, Part 2” simultaneously having to function as a middle chapter for this year’s big crossover, while also serving as something of a backdoor pilot for The CW’s proposed Batwoman series, gives this episode a lot of ground to cover, but fortunately it rises to the task very nicely! The episode definitely hits the ground running with the Batman/Gotham City foreshadowing as well, as Barry and Oliver engage in amusing banter about whether or not Batman is real, after he’s been an urban legend in the Arrowverse for years (though this is the first that viewers are hearing about it), while Kara, who makes it fairly obvious that she has some sort of off-screen history with the Batman family on Earth-38, impatiently tries to get the mismatched Flash and Green Arrow going. The idea of Oliver actually not being the first vigilante hero in the Arrowverse (yes, there was the Justice Society in the 1940’s, but they weren’t technically vigilantes), is pretty interesting here, especially as Oliver quickly becomes sore about the idea of being a copycat, nicely playing off of how he was also intimidated by Superman during the previous crossover episode.

Once the heroes actually do get to Gotham City, Barry, Oliver and Kara have to work together to try and locate the man from Cisco’s vibe (even though viewers already know who he is), with Oliver eventually suggesting that they talk to a radio DJ named Vesper Fairchild, a familiar character from DC’s Batman comics. In the process, the three get mugged, leading to Barry trying to defuse the situation by fighting, which only lands everyone in jail… Until they’re bailed out by a mysterious woman who appears to be working out of the abandoned Wayne Tower. This woman is Kate Kane, the cousin of Bruce Wayne, who allegedly left Gotham City three years ago, around the same time that Batman allegedly disappeared. Nothing suspicious about that, eh? Kara even makes sure to point this out, but Kate nonetheless dodges scrutiny, despite bonding with Kara over their shared experiences with family ties and heroics. It’s here where Kara also bluntly spells out that her cousin is a ‘frenemy’ of Batman on Earth-38, confirming that, “Clark’s friend” from Gotham City that has been referenced several times on Supergirl was indeed Bruce Wayne, and that Batman still seems to be very much active on Earth-38, despite having abandoned Gotham City on Earth-1.

Once Kate positively identifies Dr. John Deegan as the disgraced psychiatrist from the vibe, Barry, Oliver and Kara inevitably ignore Kate’s demands to leave Gotham City, and instead go straight to Arkham Asylum, where Deegan is said to work. Batman fans will be overjoyed here, since the asylum is predictably packed with Easter eggs! After Diggle, Cisco and Caitlin all breach to Arkham to help with the infiltration, Oliver and Diggle get to view the cells of several Batman villains, namely Penguin, Poison Ivy, Riddler and Clayface (as well as an amusing nod to Arrowverse overseer, Marc Guggenheim), before confronting Deegan, who quickly lets all of the inmates loose, so that he can buy time to escape! This leads into an awesome sequence of fights, with Diggle having to single-handedly take down a whole squad of deranged Arkham inmates, while Oliver rounds them up with his super-speed and places them back in their cells! Caitlin, meanwhile, has to try and repel Mr. Freeze’s wife, Nora in her Killer Frost form, after Nora breaks out of cryostasis, while Barry and Cisco face off against familiar DC villain, Psycho-Pirate outside, who actually manages to get the upper hand!… Until Batwoman drops in! 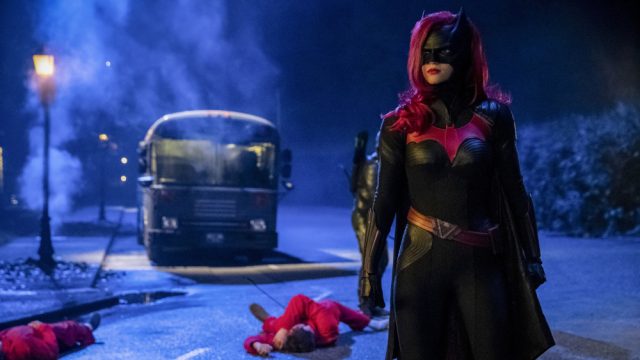 As far as Ruby Rose’s first proper action scene as Batwoman goes, she certainly makes quite the impression! She’s shown to be a skilled fighter, an imposing presence to enemies, and has no shortage of familiar Batman gadgets, such as Batarangs and grappling hooks. Batwoman not only handily takes out Psycho-Pirate and saves Cisco without breaking a sweat, but also later comes in just in time for Barry and Oliver to fight each other after being accidentally exposed to Scarecrow’s Fear Gas, which makes them hallucinate each other’s arch-foes, Reverse-Flash and Malcolm Merlyn! After Batwoman snaps the two heroes out of it, and Nora Fries, who was inadvertently responsible for the Fear Gas incident, gets away, Batwoman tells the heroes’ group again to get out of Gotham City, but not before Supergirl confirms that she knows it’s Kate Kane under the cowl, and that it’s too bad they won’t be able to team up. This seems to foreshadow a Supergirl/Batwoman alliance in the Arrowverse’s future, especially if (and more likely when) Batwoman gets ordered to series by The CW, and I certainly wouldn’t mind that prospect! Ruby Rose seems like a plenty capable Batwoman so far, to the point where the viewer likely won’t even miss Batman in the end!

As much as all of the most fun and action-packed moments in this episode took place in Gotham City, the overall mystery behind the Elseworlds crossover was most often pushed forward at the A.R.G.U.S. offices back in Star City, where Felicity and Curtis, and later Cisco and Caitlin, join forces to try and figure out what is creating the weird weather phenomena in Central City, and later Star City. Eventually, after some tinkering, the group manages to help John Wesley Shipp’s Flash from Earth-90 breach to Earth-1, where he warns the heroes about the influence of The Monitor (while also confirming that Diggle is a Green Lantern on Earth-90, nicely nodding to a long-held fan theory that Diggle is an undercover John Stewart!), the powerful presence behind the reality-altering book that Supergirl successfully snatched from Deegan at Arkham Asylum! The Monitor nonetheless gets the book back after goading the heroes to Central City, which results in reality being re-written again so that Barry and Oliver become de-powered criminals. Not long after, the two are pursued by Green Arrow foes, Malcolm Merlyn, Ricardo Diaz and Derek Sampson, now being Central City police officers, before the two heroes are cornered by a black-suited Superman at the very end of the episode. The Arrowverse’s heroes may now know what’s at stake and why, as a supposed, “Crisis” appears to be looming for Earth-1 (even if Supergirl’s Earth-38 seems insulated from it for now), but it seems like Oliver’s and Barry’s problems are multiplying, despite the two now seemingly being back in their proper bodies, albeit without Barry’s speed.

This was certainly a very exciting and enjoyable middle chapter for the Elseworlds crossover, which was only occasionally dragged down by some of the less effective dramatic scenes at A.R.G.U.S. Team Arrow keeping Felicity in the dark about the body swap never really felt like it made sense, and interjecting scenes related to this awkward Felicity drama around all of the fun in Gotham City just felt disjointed and annoying. Outside of that minor quibble though, “Elseworlds, Part 2” was pretty much a slam dunk, providing an outstanding first tour of the Arrowverse’s version of Gotham City, and bringing Batwoman into the heroes’ circles with aplomb! This helped Arrow make up for some of the stumbles in last week’s proper midseason finale, while also keeping the reality-warping stakes nice and high for the final Elseworlds episode that Supergirl is set to host the following night. It might annoy some that the introduction of Batwoman and Gotham City to the Arrowverse seems to be entirely contained within this one episode, with the rest of the Elseworlds event possibly abandoning it, but as far as backdoor pilots go, this was a strong one, especially when it also excelled at keeping an entertaining crossover going between most of the Arrowverse’s previously established heroes to boot!