With the introduction of Batwoman and Gotham City now out of the way for the Arrowverse, after the previous night’s second crossover episode on Arrow, the final chapter of this year’s ‘Elseworlds’ crossover event can unfold on Supergirl this week, now temporarily in The Flash’s timeslot, after The Flash kicked off the crossover in Supergirl’s timeslot during this past Sunday. “Elseworlds, Part 3” may not have the advantage of adding an exciting new corner to the Arrowverse, but it did manage to cap events off on another exciting note, as Deegan re-writes himself into a ruthless new Earth-1 Superman, while also imprisoning Supergirl in the Pipeline at S.T.A.R. Labs, and completely erasing the heroic identities of both the Green Arrow and The Flash!

With Oliver having lost his fighting skills and Barry having lost his speed, the two heroes at least find themselves back in their proper bodies and proper identities, though at the cost of being a pair of wanted criminals in Central City called the, “Trigger Twins.” The two just barely manage to get away from Deegan, as Superman, and decide to start looking for Cisco, who can once again allow them to get to Earth-38 and get help, this time from the real Superman. Cisco, as you can imagine, has also undergone a heavy re-write, now being one of Central City’s most dangerous crime bosses, who operates out of a bar tended to be Gary Green from Legends of Tomorrow (enjoy the Gary cameo, because it’s the only nod to Legends of Tomorrow in this year’s CW crossover), with James’ Earth-1 doppelganger now serving as Cisco’s lead enforcer.

The casual confirmation of Earth-1 doppelgangers for James and Alex is finally made in this episode (the Arrowverse previously appeared to pretend as if none of the Supergirl characters exist on Earth-1, even outside of the Superman family, and nor does National City), even though they’ve never previously been glimpsed in the main Arrowverse setting before now. James’ appearance is little more than a fun cameo, but it’s the Earth-1 Alex that actually ends up playing a more significant role in the episode. The Earth-1 Alex doppelganger happens to be one of the favoured agents of Deegan’s Superman persona in the re-written reality, while also overworking and being in denial about her homosexuality. Kara thus has to keep trying to appeal to her sister’s doppelganger in hopes of escaping the Pipeline. Since most of the crossover continued to be dominated by action-packed fun in this third and final chapter, Kara’s heartfelt attempts to reach Earth-1’s Alex made for a nice bit of uplifting emotion, adding some substance to an episode that was mostly about entertaining fan service. This was a great way to leverage Kara’s and Alex’s incredible bond as sisters, without Earth-38’s Alex properly participating in the crossover this year, and it led to a mostly believable means through which Kara could ultimately escape confinement.

Before Oliver and Barry actually do manage to make it to Earth-38 and call in some more allies to help stop Deegan, they also have a conversation with The Monitor, after inadvertently running into him in an office building (don’t ask). It’s here that we learn that the Monitor is not meaning to destroy Earth-1, but is actually trying to test it, by empowering an obvious maniac to create a dangerous, reality-threatening obstacle, in order to evaluate whether Earth’s heroes are worthy to face some sort of unspecified inter-dimensional threat that’s coming in the future. This threat is almost certainly the Anti-Monitor, a reality-devouring force of pure oblivion that outclasses even the omniscient and all-powerful Monitor in terms of sheer might! This setup appears to be ripped straight from DC Comics lore, namely the famous Crisis on Infinite Earths storyline from 1985, which also saw The Monitor finding a means to rally Earth-1’s heroes against the coming of the Anti-Monitor. The result of this storyline originally led to the destruction of the DC Comics Multiverse, replacing it with one singular ‘New Earth’ that all of the characters under DC’s purview would inhabit together (the DC Comics Multiverse would later be restored many years down the line, with the New 52 reboot), as well as the deaths of DC Comics’ renditions of Barry Allen and Kara Zor-El, leading to others taking up the Flash and Supergirl mantles for many years afterward, until both characters were later resurrected in future DC Comics storylines. 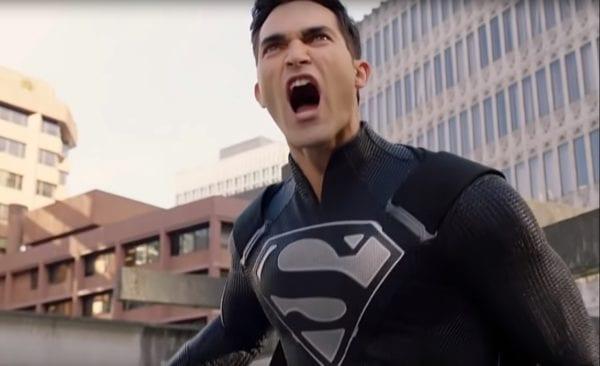 There’s an especially conspicuous nod to that tragic turn with Barry and Kara in DC Comics lore as well, after Superman eventually helps Oliver, Barry and Kara regain their full heroic splendour by briefly snatching back the Book of Destiny during a pretty badass Superman-vs.-Superman battle, wherein it’s determined that the only way to disable Deegan and permanently reclaim the Book of Destiny is to slow down the Earth’s rotation so that Oliver can take a fateful shot at the false Superman. Once again, it comes down to the Green Arrow. Superman saw during a brief time holding the Book of Destiny however that Barry and Kara will die in the attempt to save Earth, since they will run/fly themselves into ash during the attempt to slow down Earth’s rotation, somewhat mirroring Barry’s cause of death in DC Comics’ Crisis on Infinite Earths storyline. Oliver pays the Monitor another visit to make some sort of unspecified deal however, which spares the life of Barry and Kara, and allows Oliver to make the arrow shot that can allow Deegan to be returned to his rightful form, while Lois, who breaches over to Earth-1 with Brainy and J’onn, can help with the civilians and deal with the last of the destruction wrought by Deegan.

We certainly get a thrilling finish to the crossover through Deegan’s epic defeat, though it’s in this final portion that the episode sometimes starts to stumble from a narrative standpoint, despite a spectacular final battle against Deegan still playing out. The whole need to bring in Lois, Brainy and J’onn in the first place simply comes down to Barry stupidly refusing to allow Oliver to take the first shot against Deegan, for starters, believing that this is the Monitor’s test, only to be flat-out wrong, and lead to even more trouble. This wasn’t a gesture of nobility so much as a transparent attempt to fill out the episode’s runtime, since Oliver logically should have been able to stop Deegan and end things right there. The last five minutes of the episode in particular are equally problematic, as we get an extended depiction of Lois and Clark revealing that they’re pregnant to Kara, before Clark soon after proposes to Lois in the Fortress of Solitude. This is kind of sweet, but it rings a bit hollow when you consider that we’ve barely seen Clark on Supergirl at this point, and this also happens to be the first time that we’re seeing Lois in the Supergirl universe at all! We don’t truly know these renditions of the characters, so it’s tough to feel that much emotion for what’s supposed to be a big character moment for the Supergirl universe, especially when it also serves as a transparent plot device, namely to keep awkwardly writing Superman out of Supergirl, so that Kara can keep being the only Kryptonian hero on Earth-38 who truly matters.

Despite some of the frustrations and tedious storytelling in the climax and resolution however, we do at least get an immediate tease for next year (which might as well also serve as advance renewal notice for Arrow, The Flash and Supergirl at least), when Batwoman calls Oliver to ask if Deegan is going to be a problem for her in Gotham City (why exactly are events at Arkham Asylum supposed to be Oliver’s concern?), before a brief monologue by Psycho-Pirate in the adjacent cell reveals that next year’s DC TV crossover event for The CW has already been decided! A blunt ending title card then confirms that next year’s CW crossover will be called ‘Crisis on Infinite Earths’, and it will air at some point during Fall 2019! The obvious speculation here is that the Supergirl universe may ultimately be folded into the same universe as Arrow, The Flash and Legends of Tomorrow (and possibly the Black Lightning universe, if that show is renewed, and its showrunner agrees to it) in the wake of this crossover’s events, which would both echo the fallout of DC’s source comics, and finally potentially tie all of The CW’s current DC dramas into one cohesive universe (again, Black Lightning may or may not be an exception, depending on its status in 2019), especially since Batwoman has also been established to take place on Earth-1 by this very crossover, not Earth-38. That’s just speculation on my part though.

“Elseworlds, Part 3” didn’t end up being a perfect conclusion to this year’s ‘Elseworlds’ crossover event, but it was still a pretty strong one, providing another fun dose of action and high-powered thrills for many of The CW’s biggest superheroes. The final confrontation with Deegan didn’t always flow very naturally from a narrative standpoint, but the heroes once again coming together to stop a greater evil remains satisfying, especially with blunt confirmation that next year’s CW crossover will be adapting the Crisis on Infinite Earths storyline from DC Comics lore! Oliver’s bargain with the Monitor to save Barry’s and Kara’s lives does seem to paint a grim future for Star City’s former vigilante, though I suppose that Oliver could still cheat death in the end, since Legends of Tomorrow established that Oliver is still alive in 2046, and the presence of John Diggle Jr. would seem to confirm that this future is accounting for Flashpoint as well. Regardless, 2019 is sure to be a very exciting year for the Arrowverse, especially with Batwoman now being in a prime position to join it, after a great introduction to that character and her home city during this year’s second crossover episode that was hosted on Arrow. There’s still a lot of storylines to get through across multiple shows before the Anti-Monitor inevitably comes to threaten the Arrowverse next year, but with The CW’s shared DC Multiverse capping off 2018 on a fun, if imperfect note, I’m nonetheless looking forward to remaining along for the ride!