NOTE: Some minor spoilers for, “Deadpool 2” may be present in this review

With the finalization of the Disney-Fox merger just a few weeks away at the time of writing, the X-Men and Fantastic Four movie rights are fully primed to return to their rightful owners at Marvel. Both of those properties will no doubt fit comfortably into the Marvel Cinematic Universe once Disney re-acquires their film licenses from 20th Century Fox, having already established themselves as very general audience-friendly under Fox’s watch, even if only the X-Men license managed to properly launch a beloved movie franchise for the Fox catalogue.

Fox’s remaining Marvel movie license however, the one for fan-favourite mutant anti-hero, Deadpool, is in more of an uncomfortable position for its assimilation into the House of Mouse. With the original Deadpool movie currently standing as the highest-grossing R-rated movie of all time, and both Deadpool movies proudly marketing themselves on how heavily they’re explicitly geared towards adults, the Deadpool film brand essentially stands as everything contrary to what Disney prefers to market their blockbuster movies on. This Deadpool brand difficulty for Disney seems to partially explain the sudden existence of Once Upon a Deadpool for a limited theatrical run this December, a re-cut PG-13 rendition of this year’s sequel, Deadpool 2. Once Upon a Deadpool primarily aims to raise funds for cancer research charity campaign, “Fudge Cancer”, which it will be donating a share of its box office proceeds towards, though it also appears be a Disney-sanctioned experiment, one meant to test audience reception to a more family-friendly take on the Merc with a Mouth. 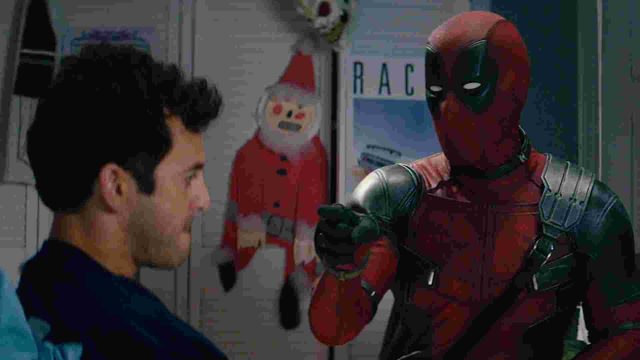 Since I technically already reviewed Deadpool 2 for its original R-rated theatrical run back in May (for reference, you can check out that review here), this review for Once Upon a Deadpool will take on a different, more simplified format. There’s no sense going over all of the storytelling, character arcs and other such narrative elements again, because most would-be viewers of Once Upon a Deadpool have likely already seen the original R-rated Deadpool 2 cut, and would already be familiar with what that has to offer as an expansion to the highly beloved 2016 original. Instead, I’ll be analyzing how effectively, or how ineffectively, Once Upon a Deadpool can re-interpret a familiar cinematic offering with a reduced rating, and whether paying for another theatrical ticket, even for charity, is really worth it in the end.

I should start by getting the obvious out of the way; The original R-rated cut of Deadpool 2 is superior to this PG-13 Once Upon a Deadpool cut in every way. If you’re old enough to watch it, you should definitely stick with the R-rated version of Deadpool 2, which is much funnier and more memorable overall. In terms of making a case for a PG-13 take on Deadpool for the Marvel Cinematic Universe, Once Upon a Deadpool sadly falls flat on its face, merely proving the opposite in the end; Deadpool is best when he’s got an R-rating, and can go fully unhinged with a movie’s storyline, violence and humour. To the credit of lead star, Ryan Reynolds, he still manages to be plenty entertaining as Deadpool, even without all of the benefits of an R-rating behind him, but he’s nonetheless performing his best and most celebrated character with one metaphorical hand tied behind his back here! 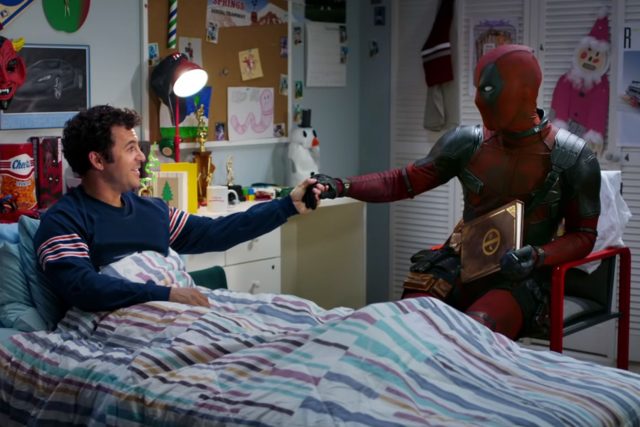 The next logical question then is whether the revised PG-13 humour in Once Upon a Deadpool really does work for a family audience. In that respect, it depends on what kind of family you have, and how sensitive they are. Even with the PG-13 re-tooling, which removes or bleeps out any f-bombs, excises any blood effects (save for the green blood that results from Shatterstar’s grisly demise during the X-Force sequence), chucks out most of the crude, drug-related and/or sexual references, and tones down the violence to remove gore or anything excessively grisly in the action scenes, there’s still quite a lot of s-bombs dropped throughout the movie, the violence is still noticeably more brutal than most other superhero movies that were designed for a PG-13 rating from the get-go, and there are still a few very rude jokes that parents won’t want their especially little kids to hear. Once Upon a Deadpool is certainly safe for teenagers (who probably snuck a viewing of the original R-rated cut of Deadpool 2 at least once by this point already!), and can likely accommodate tweens without too much hassle, but if your kid is younger than ten, Once Upon a Deadpool may still be a little much for them. It’s still nowhere near as family-friendly as most Marvel Studios flicks, that’s for sure!

If you’re already an adult, and are thinking that all of the PG-13 cuts basically suck most of the fun out of Deadpool 2, well, the blunt answer to that is, you’re right. To be fair, Once Upon a Deadpool still manages to keep a few great jokes intact, and the action is still exciting and well-shot, even when it’s blatantly neutered in this case. There’s just no denying that this all feels dumbed-down and less exciting than the original R-rated cut of the movie though, especially when some of the PG-13 edits are really obvious, with characters’ lip movements not matching obviously dubbed-in lines, or gore effects very awkwardly CG’d out, Venom-style. This won’t bother the younger viewers that can now safely watch the movie without having to sneak into it, but for people who are already old enough to watch and enjoy the R-rated cut of Deadpool 2 on their own terms, they’ll just find themselves wondering why they’re even bothering with Once Upon a Deadpool. Even being for charity, it still comes off too much like a studio-mandated cash grab, and the irony of this is, the studio in question is very likely not even Fox, but Disney! 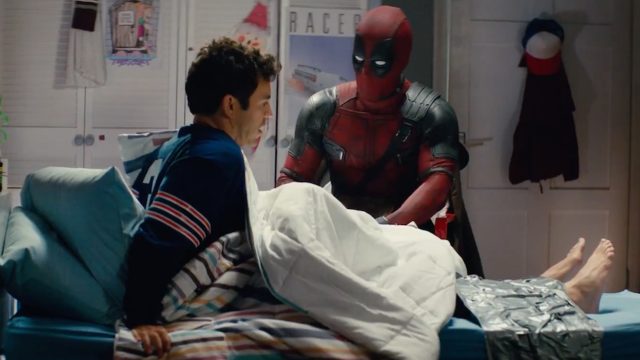 If there is any reason to see Once Upon a Deadpool during its limited theatrical run, it’s the introduction of the twenty minutes or so of new footage that was shot with child star, Fred Savage. The impetus behind Once Upon a Deadpool, from a fourth-wall-obliterating in-universe standpoint, is that Deadpool has kidnapped Fred Savage, and forcibly tied him to a bed, in an effort to recreate the narrative device from classic fairy tale movie, The Princess Bride. Savage can’t be set free until he listens to Deadpool read a storybook of Deadpool 2, one that removes any objectionable R-rated elements from the story. Some of the scenes shared between Deadpool and Savage truly are hilarious, with the highly-marketed Nickelback allegory joke being an obvious highlight, but there’s just not enough of these moments to make the trip to the theatre truly worth it. The movie ultimately only has so much time to experiment with the obvious The Princess Bride parody being set up here, and the scenes that return to Savage show up less often than you would imagine, which is a huge let-down. I get that it’s hard to frequently cut back to Savage at the proper rate, since that would probably make Once Upon a Deadpool over four hours long, but this is seriously the best that Fox (or more likely Disney) could do with this idea?

The thing is, Deadpool 2 is still a very good movie, easily standing as one of 2018’s best superhero movies, best comedies and best action movies overall. Once Upon a Deadpool however is a blatantly inferior version of that movie, one that doesn’t really destroy the fundamental heart and inspiration behind Deadpool 2, but one that definitely sucks most of the fun out of it. This specialty cut probably would have been perfectly acceptable as a Blu-Ray extra, especially since you could just as easily look up all of the Fred Savage scenes on Youtube, once they eventually and inevitably make their way there, without having to spend a dime, but that’s obviously not what this is. If you’re compelled to support the cancer charity effort that Once Upon a Deadpool is passing on some of its profits to, or are simply unrelentingly curious, then maybe Once Upon a Deadpool might merit one viewing, if for no other reason than to heighten your appreciation for the original R-rated rendition of it. If you’re really that desperate for a cleaned-up version of Deadpool 2 however (you poor soul), you could also just as easily wait for its made-for-TV version to show up on your cable listings, and that once again comes at no extra cost, beyond the time it takes to get there. 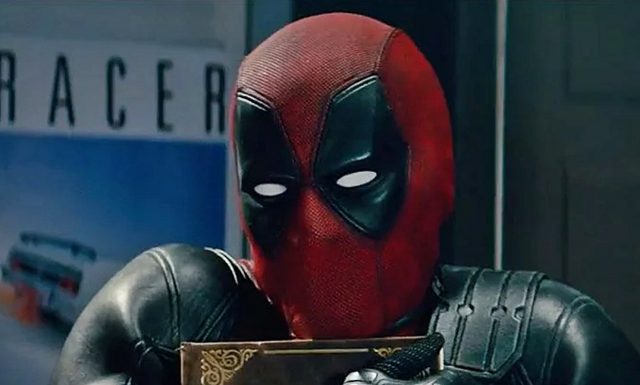 I really do hope that Ryan Reynolds is allowed to stay on as the Merc with a Mouth after the Disney-Fox merger is completed, and that he can somehow make a home for himself in the Marvel Cinematic Universe. After all, the possibilities of Reynolds’ Deadpool interacting with Robert Downey Jr.’s Iron Man, Chris Evans’ Captain America, Tom Holland’s Spider-Man, Chadwick Boseman’s Black Panther, or Benedict Cumberbatch’s Doctor Strange (or, hell, think what he could do with Josh Brolin’s Thanos, after Brolin portrayed Deadpool’s foil, Cable right here in Deadpool 2!), are truly too tantalizing to ignore! As much as Once Upon a Deadpool clearly wants to flirt with that scenario however, I think that Disney should just swallow their pride and keep dedicated Deadpool movie projects hanging on to their R-ratings. Deadpool 2 already proved that you can still make a great family film with all of the R-rated sass and hurt you could ask for behind it. Why go and immediately tarnish the goodwill of that successful experiment?

Once Upon a Deadpool Review
Once Upon a Deadpool is an interesting experiment on paper, but it's clearly watered-down and neutered, and only definitively proves that Deadpool 2 demands an R-rating to enjoy to its fullest.
THE GOOD STUFF
THE NOT-SO-GOOD STUFF
2018-12-18
60%Overall Score
Reader Rating: (0 Votes)
0%