Every so often, a movie adaptation seems to come along that is so inexplicable, so strange and so seemingly pointless, that you have to wonder how it ever got made in the first place. This year’s latest cinematic adaptation of Robin Hood, coming courtesy of Lionsgate and Summit Entertainment, is one such case. It’s a movie that wants to be simultaneously grounded and historically faithful, yet also built on an exaggerated comic book tone. It also aims to fill itself with personalities that are both dramatic and grounded, yet also cartoon-ish and absurd. It’s a narrative mess with overdone plotting that somehow also feels underdeveloped, leading to a story that you’ll quickly zone out at, before the noisy, disjointed action scenes wake you up again. 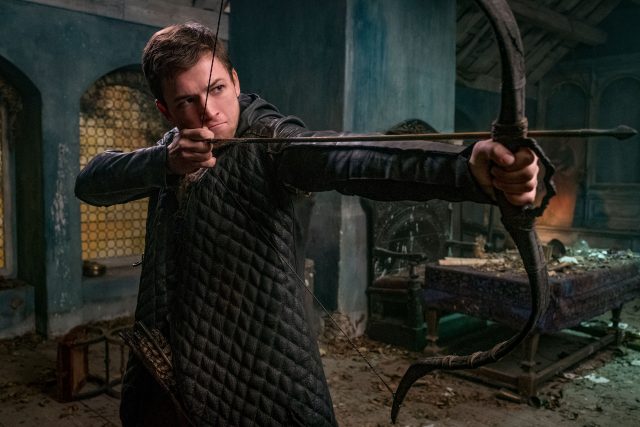 And yet, for all of its many, many failings, this year’s adaptation of Robin Hood is a movie that I can’t bring myself to hate. Perhaps this is because it at least bothers to have some energy and personality, which is more than I can say about 2010’s previous big screen Robin Hood adaptation from Universal, a movie so aggressively dour and dull that it just quickly devolves into a miserable, tedious slog. More than that however, this new Robin Hood adaptation quickly becomes such a fascinatingly botched misfire, a misfire whose very existence is inexplicable, that it manages to enter, “So bad, it’s good” territory, providing unwitting entertainment in its own right, even as audiences will routinely struggle to take it seriously. This certainly doesn’t merit a trip to the theatre (unless you really savour intentionally buying theatre tickets to enjoy bad movies ironically), but for a quick home viewing rental on a boring night, you may find something ludicrous enough to merit a few unlikely laughs here.

This year’s latest adaptation of Robin Hood stars Taron Egerton as the titular 12th Century vigilante, the noble lord, Robin of Loxley, who is conscripted by the Sheriff of Nottingham to fight in the Crusades. It’s here that Robin meets Little John (or just, “John” in this version), played by Jamie Foxx, a Muslim warrior who wants revenge against the Sheriff for his own reasons, and trusts Robin to help him, after Robin tries to save his son’s life at a prisoner camp. On paper, this revised take on Robin and Little John is actually somewhat interesting, and might have worked, had the movie fully committed to its historical Crusades-era backdrop. Ultimately though, Egerton feels miscast, being far too baby-faced and plucky to be a believable Crusades veteran, while Foxx does what he can with the material, but feels too inconsistent of a character to truly register. 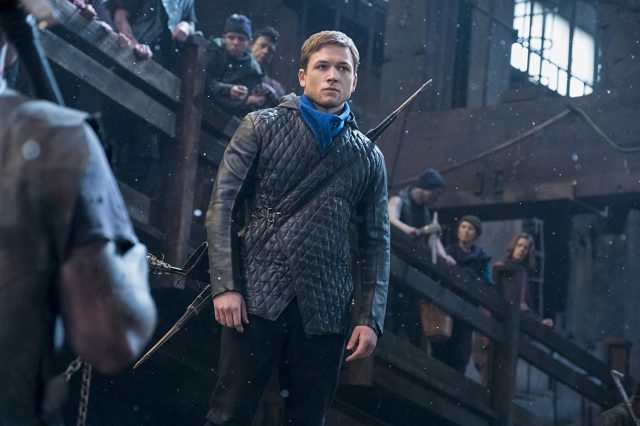 Things aren’t much better for Robin’s band of Merry Men either, who, in this adaptation, are never really a cohesive unit, and only consist of a few familiar personalities. Tim Minchin has to try and serve as comic relief in his portrayal of a pious, but bumbling Friar Tuck, which sometimes works, but most of the time, it will just make you wonder how Tuck ever got to the position that he did. Eve Hewson, meanwhile, is saddled with an incredibly thankless role as Maid Marian, a character that tries so hard to be more than a plot device and rescue bait, but the movie can’t quite hack it in the end, leaving Marian to feel like an awkward tag-along that Hewson can’t glean any depth from. The same is true of Marian’s new beau, Will Scarlet (or, “Will Tillman”, as he’s known in this version), played by Fifty Shades franchise survivor, Jamie Dornan, whose position in the movie is so confusing that he feels like he should have been a different character altogether. In fact, fans of the Robin Hood legend will especially think that, when they see how Will’s arc ultimately pans out.

The only person who manages to escape this Robin Hood adaptation with any degree of dignity is Ben Mendelsohn, and that’s only because he’s such a skilled villain actor. Mendelsohn portrays this movie’s main antagonist, the Sheriff of Nottingham (who is once again not explicitly named in this version of the story), a mustache-twirling government thug who seems to love causing trouble for Robin and the local populace simply because he’s evil, I guess. Again, how exactly did Mendelsohn’s Sheriff get appointed, when he’s so obviously untrustworthy and corrupt?! This is explained in most versions of the story by the Sheriff’s alliance with the equally corrupt, yet also all-powerful Prince John, but not here, because Prince John doesn’t appear at all in this version of the story, and may not even exist in this case! Mendelsohn still acts circles around everybody else here, and even in a movie like this, he excels at playing villains that you’ll love to hate, but his Sheriff nonetheless feels like a bargain bin Marvel Studios baddie, simply existing to put a disposable face to the circumstantial obstacles that the hero will have to overcome.

Robin Hood still makes a loose effort to hit some of the most vague beats of the age-old legend. There’s a 12th Century vigilante archer, he steals from the rich and gives to the poor, Little John is his closest ally, Maid Marian is his love interest, and the Sheriff of Nottingham is his nemesis. That’s about all of the faithfulness to the legend that this version of the story maintains. Everything else is an experimental add-on, serving as the latest desperate attempt to modernize a story that has already been done to death throughout decades of film adaptations. We already have several great Robin Hood movies, a couple of good ones, and plenty of bad ones. No one was asking for another Robin Hood adaptation, so clearly, this new adaptation had to really pull the rug out from under viewers. It kind of does that too… But for the wrong reasons. 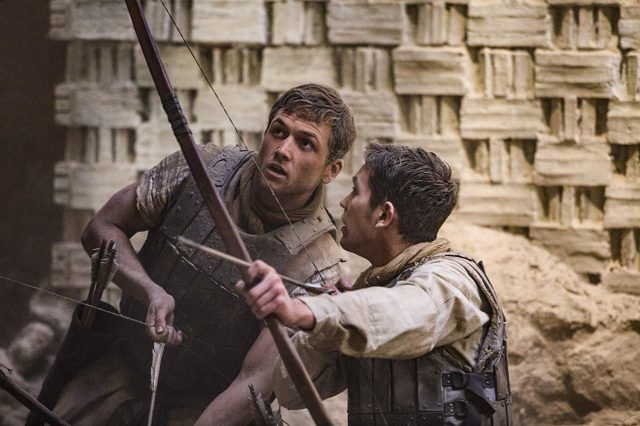 In trying to create an unexpected new storyline for the Robin Hood character, 2018’s Robin Hood just becomes a mess of half-baked, ill-conceived ideas, which never really manage to gel together into a cohesive whole. Instead, the movie awkwardly shuffles from one set piece to the next, finding bursts of entertaining moments between its stilted dialogue and ridiculous performances, but also trying to stitch all of that together amid a story that feels questionable at best, and at worst, one that doesn’t make any sense at all. It honestly feels like Robin Hood is trying to be a comic book movie in disguise, but one that sadly has far more in common with Sony Pictures’ muddled and messy Venom than Marvel Studios’ stylish and ingenious Black Panther. Like Venom, Robin Hood at least succeeds at having personality and being ironically entertaining, if you’re not taking it seriously, but that doesn’t change the fact that it’s a poorly-plotted mess, with its confounding concoction of modernization attempts ultimately exploding in its face in spectacularly awful fashion.

Otto Bathurst directs Robin Hood, having entirely worked in television before this point. Perhaps Bathurst should stick to his day job though, because his feature film directing debut is far from an exemplary one. Bathurst does what he can to lend some style to the mess of a script that he has to work with, and sometimes, he succeeds, even though it feels like he does so by accident. Most often though, Bathurst just doesn’t seem to know how to stage a lot of the movie’s action scenes, which feel over-edited and confusing, preventing audiences from taking in the otherwise impressive scale of destruction on display. The character moments aren’t much better either, since the movie’s personalities don’t often manage to feel like believable characters. Again, this would be fine if Robin Hood was fully embracing an over-the-top comic book tone, but when it tries to ground itself in real historical atrocities, that opportunity quickly flies out the window. 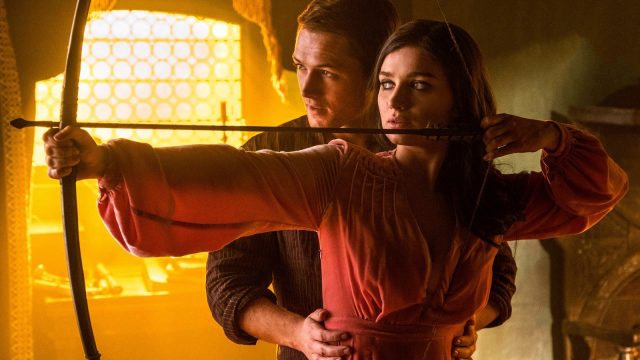 By the later reaches of the movie especially, it really just feels like Bathurst is throwing everything at the wall and seeing what sticks, only to later give up, and completely stop trying to make something that anyone could possibly take seriously. This leads to direction that feels very scattershot, in turn resulting in Robin Hood experimenting with quite a few styles and tones, but never really consistently settling on any of them. The direction is ultimately just as messy as the script, leaving the actors confused and not sure how to make anything work, save for Mendelsohn, who, like I said, just has to sneer about catching that damn dirty Robin Hood. Again, this possibly could have worked a bit better, if Robin Hood had fully embraced a comic book tone, but even then, the movie would have had to be consistent with its directing style, and in that respect, Bathurst just too often seems in over his head here.

Robin Hood is an epic misfire that already doesn’t have much of a reason to exist, making it a fascinating cinematic platter of bad ideas that just make you wonder what anyone was thinking. Like I said though, it does manage some accidental charm as a, “So bad it’s good” movie that you can ironically enjoy, assuming you suckered a friend into paying for it. There’s just enough accidental entertainment value in Robin Hood to prevent it from feeling like a true insult, but really, we already have plenty of better Robin Hood movies, so it’s not like there aren’t already superior options preserving the integrity of this legend on film. If you’re paying to see yet another Robin Hood movie, whether at home or in the theatre, you clearly already have either an incredible sense of moviegoing adventure, a comfortable amount of disposable income, or insatiable morbid curiosity. Thus, if you’re any of those people, it’s tough to honestly feel cheated or let down by a movie that was already proudly presenting itself as experimental counter-programming, even if it is a failed experiment. 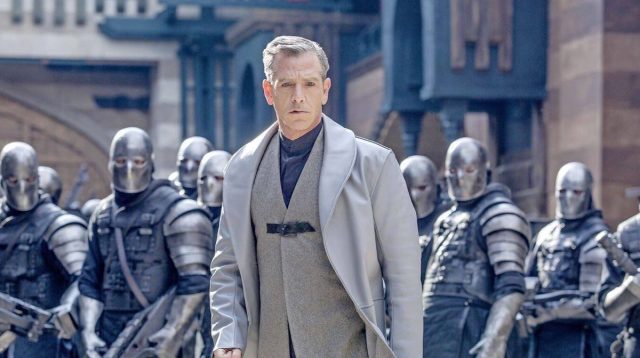 It’s true that I can’t honestly recommend Robin Hood to the majority of moviegoers, especially not in the theatre, where it’s especially tough to justify the investment. For those special kind of moviegoers that don’t mind deriving amusement from a true cinematic disaster however, Robin Hood has an ironically enjoyable heart, if not any real brains. The fact that it bluntly sequel-baits at the end is the head-shaking cherry on top as well, as if the studio honestly thought that they could build a credible modern movie franchise off the back of a well-worn public domain property that most people grew sick of a long time ago. Chalk that up to another of Robin Hood’s laughably bad ideas. I’d be lying if I said I didn’t have fun with Robin Hood, even then, and I will begrudgingly admit that it still somehow manages to be an improvement over 2010’s dismal Robin Hood adaptation, if for no other reason than having actual entertainment value. That’s a low bar though, and one that this new take on the Prince of Thieves only barely clears, still firing its arrow of inspiration so far off-target that it ended up landing in a whole other county!

Robin Hood [2018] Review
2018's big screen adaptation of Robin Hood is a clumsily-plotted, clumsily-directed and clumsily-performed mess, but one that does manage to have some ironic entertainment value if you're not taking it seriously.
CHARACTERS55%
PLOT40%
DIRECTION50%
THE GOOD STUFF
THE NOT-SO-GOOD STUFF
2018-12-16
48%Overall Score
Reader Rating: (0 Votes)
0%