Back in 2015, writer-director, Ryan Coogler turned a lot of heads with his reinvention of the decades-running Rocky movie franchise, Creed. Re-tooling the series to center around the estranged son of Rocky Balboa’s late rival, Apollo Creed, the original Creed proved to be a big hit with critics and moviegoers alike, seemingly reviving the Rocky franchise once again, after former star, Sylvester Stallone seemed to have definitively retired it with 2006’s Rocky Balboa. With Stallone now occupying a supporting role as coach and trainer to Michael B. Jordan’s brilliantly performed new lead, Adonis Creed, Creed inevitably paved the way for yet another sequel, and thus, we got Creed II this year. 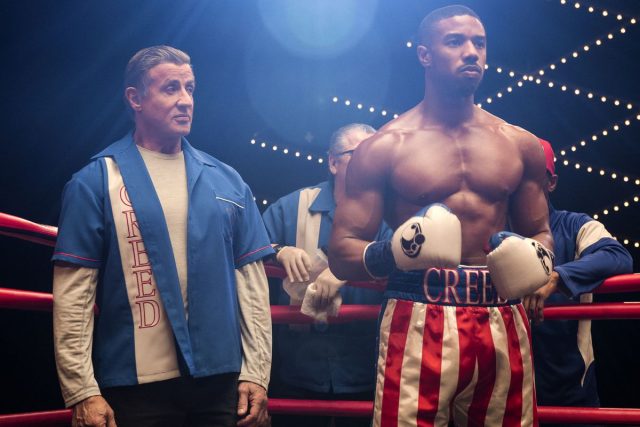 Creed II aims to be a noticeably heavier callback to the Rocky movies that came before, featuring a return for Dolph Lundgren’s Russian Rocky IV antagonist, Ivan Drago, who is now ready to dredge up the ghosts of Adonis’ past via his heavyweight boxing son, Viktor Drago. This nostalgic focus certainly draws attention to Creed II being noticeably more formulaic than its predecessor was as well. The tropes are all here, from training montages to stylish climactic fights to a career-defining rivalry against an opponent that just shouldn’t be fought. Creed II feels like it’s completely built on recycled story turns from the former Rocky movies, but in its defense, it’s still a very good sports drama. It’s certainly not an original sports drama, but it does serve as an effective testament to the old adage of not fixing what isn’t broken.

Even without former writer-director, Ryan Coogler returning for Creed II, Michael B. Jordan remains an outstanding draw for the franchise. With Adonis Creed now established and celebrated as a heavyweight boxer, Jordan is allowed to push his character to the next level, dealing with the pressures of fame and expectation, while also preparing to welcome a child into the world. Tessa Thompson’s Bianca is thus left to be a bit more of a doting wife above all else in this sequel, which only further reduces her impact after already feeling a little overshadowed in the first movie, but Thompson still makes the most of what she has to work with, especially when the obvious question about her hearing difficulties starts coming up for the baby.

As fantastic as Jordan’s and Thompson’s lead performances remain however, all eyes are definitely going to be on the reunion between Rocky and Ivan Drago here. Stallone’s Rocky is pushed into the background more than you would think in this sequel however (which is a real testament to Stallone’s humility, since he co-wrote Creed II’s script!), with much more emphasis this time placed on the Drago family. It’s actually kind of interesting to see how Ivan Drago and his son were affected by Ivan’s loss to Rocky during the events of Rocky IV, which essentially led to Ivan having to take his son out of the Soviet Union, into virtual exile in Ukraine. This won’t mean that much to you if you haven’t seen the Rocky movies, but at least there’s a valiant attempt to create an extra personal opponent for Adonis in this sequel, who now has to truly overcome the ghost of his father by fighting the son of the man who killed him.

Analyzing the plot of Creed II is practically redundant, since, like I said, it’s constructed pretty much completely on all of the expected tropes from the former Rocky movies. This unfortunately serves to the detriment of making most of Creed II highly predictable, with only a few small surprises left to ultimately keep audiences on their toes. This might suit Rocky fans just fine though, since the Rocky movies didn’t usually benefit from deviating from the series’ established formula, especially when even the original Creed borrowed its share of storytelling ideas from the Rocky movies that came before. It’s non-fans of Rocky, who may have discovered this franchise with Creed a few years ago, that might find themselves a bit more annoyed at just how conservative a sports drama Creed II ultimately is.

I suppose it comes down to just how much novelty you’re expecting from your Creed sequel then. If you’re comfortable with the fact that the Rocky/Creed movies don’t often change up their storytelling formula, and do it even less in Creed II, then you already know what you’re getting into, and you’ll likely enjoy this follow-up on that basis. If you are expecting a drastic reinvention for the big sophomore challenge of Rocky’s protege however, then don’t bother. You’re not getting that here. I’ll still avoid discussing specific spoilers obviously, but trust me, if you’ve seen literally any of the Rocky movies, or most sports dramas in general, then you’ll be able to predict almost every single story turn in Creed II before it happens. It’s still engaging and well-performed, but it’s nothing new from a narrative standpoint.

Since Ryan Coogler is not returning to direct Creed II, no doubt because of his much more high-profile gig writing and directing Marvel Studios’ mega-hit Black Panther from this past February, the sequel’s helm is instead taken by new director, Steven Caple Jr. Caple Jr. is likely not a name you’re familiar with, since Creed II is serving as his mainstream feature film directing debut (although he did write and direct an independent feature film, The Land a couple of years ago), but it’s clear that Caple Jr. nonetheless has an intimidate understanding of how a Rocky movie should present itself. Creed II thus unfolds with all of the hard-hitting drama and glitzy style that you would come to expect from a modern take on the Rocky movies, even considering the fact that we’re now following a different protagonist than Stallone’s iconic original cinematic boxer.

Again, Caple Jr.’s direction won’t present much of what you haven’t seen before when it comes to a sports drama of this nature, but he definitely knows how to execute the drama and the boxing alike throughout this sequel. The fights in particular look amazing in Creed II, with Caple Jr. even managing to rival Coogler when it comes to capturing the sheer might and ferocity behind every traded blow, as the energy of the crowd is captured just as effectively, easily pulling audiences into every high-stakes boxing match that Adonis takes on in this follow-up! Even during the quieter moments however, the drama always feels potent and well-executed, with every scene presented in just the right way to really highlight just how much real human emotion is behind what’s going on. Even working with a familiar template, Caple Jr. makes the most out of that template, leading to a sequel that feels undeniably nostalgic for Rocky fans, but one that also feels powerful and well-executed from a modern standpoint, for any viewer.

Reviewing Creed II is somewhat redundant when it comes down to it, since you could easily sum up this sequel by saying, “It’s a Rocky movie.” Granted, Creed II nonetheless stands as one of the better Rocky movies, essentially serving as the Rocky II to the original Creed’s Rocky, and considering that some Rocky fans slightly prefer Rocky II to the original, that’s definitely not a bad thing. Now that Adonis Creed has been established as an up-and-coming successor to Rocky Balboa and Apollo Creed, this sequel is allowed to go bigger with its dramatic scope, while also more liberally calling back to the conventions of what came before. This has the new Creed movies already feeling like they’ve come full circle though, meaning that some viewers may feel a bit ambivalent about the prospect of a Creed III in a few years, since Creed II already feels like it wraps everything up for the characters in such a satisfying manner.

Still, the greatest strength behind Creed II can also be its greatest weakness, and that’s the fact that, if you are at all familiar with the Rocky movies that preceded the current Creed duology, then you know exactly what you’re going to get with this sequel, for better or for worse. Creed II very proudly follows the formula of the Rocky movies, sometimes to a fault, resulting in an effective and well-executed feel-good sports drama, but one that also never truly challenges the audience’s expectations. When the performances and direction are as great as they are though, it’s nonetheless tough to complain about Creed II playing more of a defensive strategy than some people may ultimately prefer. This defensive approach helps the sequel stand strong, even if it hasn’t learned any new moves, so it can keep on bringing the hits until it can achieve that satisfying knockout ending. It’s nothing new, but it works, and sometimes that’s really all you need for a good time at the movies.