It’s officially the beginning of the end for FOX’s fan-favourite Batman prequel series, Gotham. Season Five marks the last hurrah for the show, ambitiously adapting beloved DC Comics storyline, “No Man’s Land”, namely through offering the same hook of having Gotham City become completely cut off from the outside world. After a flash-forward that will presumably tie into the series finale in a few months, which sees Gordon, Bullock, Penguin and Riddler all team up to fight a gigantic battle against some unnamed militaristic faction, Gotham’s final season properly picks up eighty-seven days after Jeremiah Valeska blew up all of the bridges out of the city during the Season Four finale, with Gordon and the shattered remnants of the GCPD now struggling to keep order in a city that has become overrun by criminals and super-villains.

This change in environmental stakes represents a massive shift for the show’s storytelling, and certainly a fittingly climactic one to boot. This week’s season premiere, “Year Zero”, thus has the difficult task of trying to lay out what to expect for the remainder of Gotham’s last batch of episodes, while delivering a satisfying storyline on its own merits. For the most part, the setup is certainly intriguing, as the episode lays out where Gotham City currently stands, who is in control of it, and exactly what kind of crises are now being faced by Gordon’s remaining forces at the GCPD. There’s a very cool premise laid out for the final season here, as Gordon explains to a government representative over radio that the GCPD has control of about ten blocks, while other districts are currently controlled by the likes of Penguin, Barbara and Tabitha, Zsasz, Scarecrow, Mr. Freeze, and Firefly. Many of these districts have different specialties and resources as well, which has resulted in a lot of warring between the criminal gangs, and a few tense bargaining alliances between them here and there.

The government is refusing to help Gotham City, naturally, which feels more than a little unrealistic outside of a true comic book universe, since the American government could very easily outgun and obliterate even the most deadly of Batman’s villains for the most part (especially since more fantastical villains like Clayface and Poison Ivy don’t appear to have any control in the city), but I guess we need to justify this DC Comics-inspired premise, so whatever. Gotham leans pretty heavily into its DC Comics roots by this point anyway, so I suppose that it’s moderately simple to accept that this universe’s U.S. government at large is just as corrupt and useless as the one in Gotham City itself. With no government help to rely on then, Gordon has to try to protect and feed the handful of refugees that have made it into GCPD territory, with food running out very quickly.

Fortunately, Bruce has stayed in the city alongside Gordon, Bullock and Alfred, and volunteers to help fly in some supplies. Bruce’s billionaire status makes it even more questionable that he would be abandoned alongside everyone else, but again, whatever. Bruce’s presence here, questionable as it is, does at least give the people some hope, while also giving Selina someone to talk to. Oh yeah, Selina was paralyzed after being shot by Jeremiah, and while she survived the surgery, the injury has left her unable to walk. Jeremiah disappearing for now is a little bit odd (and narratively convenient), but fortunately, the scenes shared between Bruce and Selina in this episode were pretty great in terms of drama. Selina even tries to kill herself with a scalpel at one point, since she’s so distraught at having lost her freedom, but fortunately, the doctors prevent her from doing so. This dramatic turn also provides an opportunity for Bruce to hear that Selina can be healed if he seeks the help of a, “Witch.” The smart money is on this, “Witch” being Poison Ivy, but regardless, I’m intrigued at the possibility of Bruce possibly getting in bed with one of the villains, if it means saving Selina, especially when he’s so close to realizing his destiny as Batman at this point.

As for the rest of the episode, it had some exciting and surprisingly funny moments, but there was also a ton of exposition, and this sometimes led to this season premiere feeling like a bit of a slog. This issue is probably unavoidable, in fairness, since Gotham suddenly has to rush towards a premature wrap-up in 2019, but hey, at least the show is getting a proper wrap-up at all, which is more than FOX’s fellow DC Comics series, Lucifer ultimately got, before it was abruptly axed on an enormous cliffhanger last year (even if Netflix ultimately saved it). When this episode isn’t explaining and outlining the new normal in Gotham City, it’s mostly revolving around a race to supplies, after Bruce’s chopper gets shot down by an RPG from an unknown assailant. This feels forced, since the helicopter was flying unrealistically low, so it was absolutely begging to get shot down by the idiot that was flying it, but I guess we need some kind of conflict to drive the episode, otherwise it’s just an hour of explaining.

After a brief gunfight, Gordon and Penguin end up in a stand-off over the supplies, with Tabitha ultimately sneaking in and getting the drop on Penguin, desperate to exact revenge after Penguin killed Butch during the Season Four finale last year. When Tabitha’s gun ends up using a defective bullet from Penguin’s factories however (yes, Penguin is inexplicably stuffing himself with food while blatantly not feeding his bullet makers, which, while nicely satirical, is also stupid and illogical by his character’s standards, at least in this show’s reality), Penguin is able to stab her in the heart, just in time for Barbara to also conveniently show up, simply so she can witness her longstanding lover die. With Butch dead, and the show approaching a climax, it really does feel like Tabitha’s character has nowhere else to go, and her death is a little bit thankless as a result. Compounding the issues with Barbara’s screams for revenge is that we already know that Barbara will ultimately be unsuccessful in her efforts to kill Penguin as well, since Penguin is clearly alive and allied with Gordon in the flash-forward that kicks off this episode, and that’s before recalling that Penguin will obviously go on to become one of Batman’s most persistent recurring foes in the near future! Well, so much for that potential suspense… 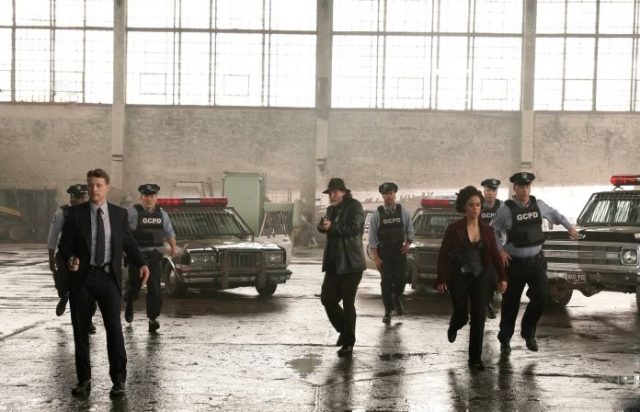 There’s a few other setups for later, such as Nygma inexplicably surviving his stab wound, and waking up in random places around Gotham City every morning (it definitely feels like the show had to skip over a massive Riddler arc here, especially since the fate of Lee is never clarified for now), while Gordon also gets wind of children being killed in another part of the city, which may be related to the mysterious RPG that was fired at Bruce’s helicopter. This is more than likely a tease for Bane, who is planned to be a major villain on Gotham this season, and at least that prospect is exciting. In its first offering though, Gotham’s fifth and final season gets off to a cool, but rather sluggish start. Tabitha’s death didn’t land with enough impact, and there wasn’t much of a payoff to any of the ongoing story arcs, which, again, I can understand to a degree, due to the difficult position that the show had to be put in for its premature conclusion. Still, it’s easy to see that the best storylines of the season are no doubt being saved for the weeks ahead. Now that all of the heavy setup and exposition is out of the way, hopefully we can get to some more exciting and satisfying events next week.